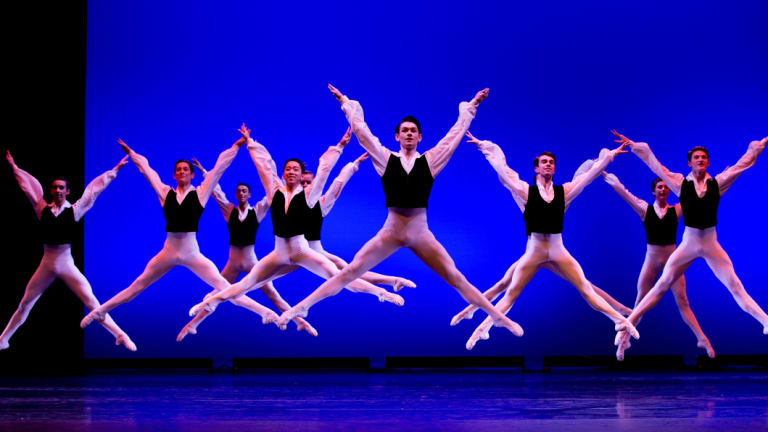 Dancers from the Australian Ballet School in 'Valetta'.

The Australian Ballet School’s Showcase has garnered for itself a strong reputation with audiences in Melbourne where it is a much-anticipated annual event. This year, Canberra audiences have a chance to see Showcase 2018 with its diverse range of works highlighting emerging stars of the future.

Among the many stories from behind the scenes of Showcase 2018 is one that is almost unbelievable. Jasmin Forner, one of the dancers who will perform in Canberra, spent several weeks in Canberra Hospital early in 2018 following a serious car accident on New Year's Eve in 2017. She can’t remember much about the accident itself but she suffered damage to her brain and some fractured bones in her face. She was placed in an induced coma and underwent major surgery to relieve pressure on her brain. But her dancer’s body refused to give in and she was discharged after four weeks and returned to Melbourne. Six weeks later she was back in Canberra for a check-up. Miraculously there was no long-term damage and Jasmin was cleared to go back to her vocational training at the Australian Ballet School.

“The accident made me very determined to get back to dancing,” Forner says. "I felt as though I had lost everything and I had to overcome that, not let it hold me back.”

Lynette Wills, an ex-Canberran who trained originally at the Betsy Sawers School of Dancing and who went on to become a principal dancer with the Australian Ballet, was Forner’s teacher at the Australian Ballet School in 2017. Wills stepped in to manage Forner’s rehabilitation once she was given the all clear. 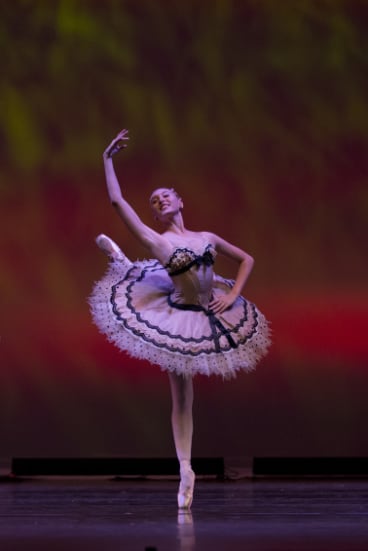 “It was an unusual rehabilitation process,” Wills explains. “Jasmin’s muscles were weakened and there was a lot of physical wastage. I had to get physical connections back into her body. We worked one on one every day until Jasmin was ready to move back into a class situation. Her courage and her burning commitment were remarkable. It was also an unbelievable journey for others to watch. It was a life lesson for us all.”

After weeks of daily work with Wills, Forner moved into the graduate class with her colleagues and now, after a little more than a term, she is taking a featured role in Showcase 2018. When we spoke, final casting had not been determined but she will dance in either an excerpt from Don Quixote, choreographed by Ai-Gul Gaisina after the Marius Petipa which Canberra audiences may remember from a visit a few years ago by the Dancers Company of the Australian Ballet, or as the sole female dancer with a cast of 13 male dancers in Paul Knobloch’s Valetta.

Knobloch will also be well-known to many in Canberra. He trained at Canberra’s Dance Development Centre before going on to dance across the world with several much-admired dance companies. Now a ballet master at the Australian Ballet, his Valetta was created in 2007 for the Australian Ballet and was named after his grandmother, Valetta Alameda Johnston.
“My grandmother was such a strong role model for me, as is my mum,” Knobloch says.

"Valetta’s sheer determination, passion and zest for life inspire me every day, even without her here. I wanted her to be idolised by a corps de ballet of men, almost as Marilyn Monroe was, although I am using a classical form of dance. It is my way of paying tribute to her and the wonderful woman she was.” 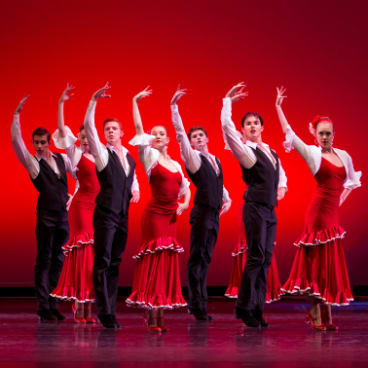 Dancers from the Australian Ballet School in 'Alegrias'.

Also on the program is a newly commissioned work, Ballo Barocco, from the Australian Ballet’s resident choreographer Stephen Baynes. Baynes says he wanted to create a work that showed the “classical technique and musicality” of the Australian Ballet School’s dancers and has set Ballo Barocco to four compositions of J. S. Bach. Ballo Barocco has been rehearsed by Lynette Wills who will oversee its staging in Canberra. In contrast to this classicism is a feisty Spanish number, Alegrias, from the Australian Ballet School’s Spanish dance teacher Areti Boyaci. It comes from Cadiz in southern Spain and features, Boyaci says, flamenco styles moving from “slow and sensual movement” to “rapid fire footwork”.

Other works in this exceptionally diverse program include two choreographed by Simon Dow -- Wolfgang Dance and Danza de la Vida, the latter drawing on tango rhythms from Argentina; a contemporary piece from Margaret Wilson called Heart String; and a section from Mark Annear’s Birthday Celebration. All show, in their individual ways, the exceptional skills across a range of dance forms that the dancers acquire at the Australian Ballet School.

Van der Vaart on Maguire: he tells his wife every day: I screwed up, but I still get paid a lot
Agent de Bruyne: Kevin is not thinking about leaving Manchester City. 90% of news is nonsense
Ronaldo is the king of alcohol. I was out with Vieri, begging for beer from the media, and I figured out how to drink in front of the coach
MLS is back: almost 9 minutes of protest against racism and a giant virtual adidas logo in the center of the field
Solskjaer on MATIC: I'm Glad he stayed. We need experience in a team with children who run around
Germany manager Bierhoff: Havertz is a player for Real Madrid
Buffon's agent: Gianluigi should become a coach. He can lead Juve
Source https://www.smh.com.au/national/act/the-australian-ballet-school-showcases-its-rising-stars-20180911-p502yt.html?ref=rss&utm_medium=rss&utm_source=rss_feed

Hawks and Magpies turn to the kids

NSW could join Victoria in lockdown

One public housing tower to remain in lockdown, restrictions to ease on others

Hunt future under a cloud as NSW sign Kyle Godwin

Olympian charged over fatal alleged hit and run at Freshwater

ASX bounces back from market slump

Talau: Brutal sessions with dad made me better

Rowling, Atwood among 150 authors warning of 'intolerance of opposing views'

‘SUBSTANTIAL’ NUMBER OF CASES: Virus blows out in lockdown towers

One public housing tower to remain in lockdown, as restrictions on others eased