When the number of new daily COVID-19 cases in Victoria started spiking last week, Patrick Guest had a feeling of dread.

He knew he would have to move out of the family home, for the second time this year. 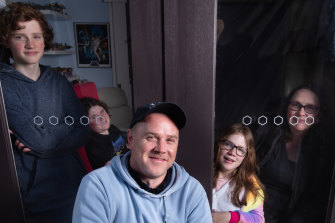 The author Patrick Guest with wife Lisa and their children, Reuben, 13, Noah, 14, and Grace, 11. Patrick has just released a new children's book, Windows, about being stuck at home due coronavirus. Credit:Simon Schluter

Mr Guest, of Mornington, and his wife Lisa, have a son, Noah, 14, who has Duchenne Muscular Dystrophy – a severe, progressive muscle weakness disorder.

Noah is mostly confined to bed and has 50 per cent lung capacity.

Mr Guest’s job as a physiotherapist puts him in touch with a wide range of people, from police officers to supermarket workers and he knew it could be fatal if he passed COVID-19 on to Noah.

And so, when the first COVID-19 wave hit in late March, Mr Guest left his wife, Lisa, 49, and children Noah, Reuben, 13, and Grace, 11, and moved to a friend's vacant house 18 kilometres away in Seaford.

During his six-week exile, he visited the family home every day – talking, playing games and reading stories through Noah’s bedroom window.

But there was no touching, which Mr Guest found "incredibly tough".

His physio job is one of the few where touch is still allowed. "I’ve had people breaking into tears because it’s the first time they’ve been touched in months," he said.

In early May, with community transmissions on the decline, Mr Guest moved back home and resumed family life.

But on Tuesday, with COVID-19 cases soaring again, Mr Guest will again move out, for an indefinite period.

"There was novelty, the first time around," Mr Guest said. "This time, I think it’s been replaced by dread and despair."

But he is trying to cultivate hope. "There’s no vaccine for despair, except for hope," he said.

Mr Guest is also a children’s author and in his new book, Windows, child characters stuck at home are consoled by seeing, out of their windows, funny-shaped clouds, neighbours playing music and grandparents dancing. 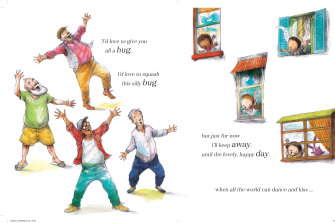 One scene looks forward to the joyous day when they can hug their friends and relatives again.

The book was published in digital form on Monday by Hardie Grant Children’s Publishing – to coincide with the pandemic – an unprecedented six weeks after Mr Guest and illustrator Jonathan Bentley signed the contract.

Most picture books take at least a year to develop. The print version is due out in October.

At first, Mr Guest made the focus of the story a father like himself, starting with the verse: ‘‘Out the window, I can see/ a new world looking back at me’’. 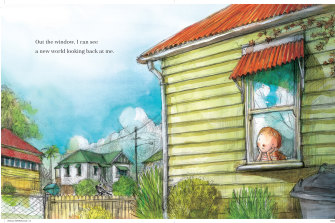 Window to the world: a child gazes out from a house in the book 'Windows'.Credit:Hardie Grant Children's Publishing

But he realised that children in lockdown, and their elderly grandparents were ‘‘really doing it tough’’, so he made the book about them.

He wants the book to be ‘‘a beacon of hope’’, but also celebrate children's resilience.

He said his daughter Grace can spend 10 minutes describing a puppy she’s seen.

‘‘They were animated and excited. It was great,’’ Mr Guest said. ‘‘They’re finding ways to get through this, the kids, that we can all learn from.’’

Spartak is going to withdraw from the RPL because of the refereeing – your reaction?
There are 2 cases of coronavirus in Atletico. The match with Leipzig – August 13
Renzo Ulivieri: Pirlo is one of the most profound thinkers of world football. He knows more than most coaches
Pirlo wants to sign Tonali at Juve. Alternative – Locatelli
Before the match with Real Madrid, sterling watched a video of the defeat by Tottenham in the 2018/19 Champions League
Andrea Pirlo: I am Flattered to have received such respect and trust from Juventus
Former Manchester United midfielder angel Gomez has moved to Lille. He will spend the season on loan in Boavista
Source https://www.theage.com.au/national/victoria/the-children-s-book-author-who-moved-out-twice-to-protect-his-family-20200713-p55bjk.html?ref=rss&utm_medium=rss&utm_source=rss_national