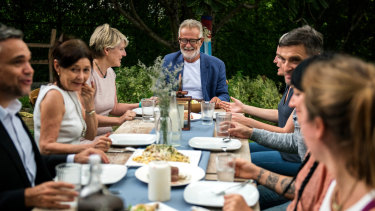 The morning-after text can indicate the success or otherwise of the modern dinner party.Credit:Shutterstock

The "morning-after text" is an essential feature of modern dinner-partying, which is why I was devastated last week when we had a couple of friends round for dinner – our first dinner party in months – and we woke up the next morning to ... no text. Not even a lip-smacking emoji. Not even a thumbs up. Not even a thank you email, which is a ridiculously old-fashioned form of post-party-texting from the 20th century, but still acceptable in more formal social circles.

The dinner party chatter was outstanding. I hadn’t done any dinner-partying for ages, so I made sure I preplanned some talking points. Did a great riff on how the US is a failed experiment, which I stole from a Vanity Fair article that I didn't really understand, but still I sold it (it’s all about talking loud and sighing at the end of every sentence). And I did an interesting observational bit about the letter J that I’d been rehearsing for days: how there are so many J-names like Jordan, Jamie, Jerry, Jack, Jenny, Jane, but only a few J-words: all I could think of was jeep, jackal and jugs. Our friends were enthralled, I stretched it to about eight minutes, lots of J names to get through. Joaquin. Jaylani. 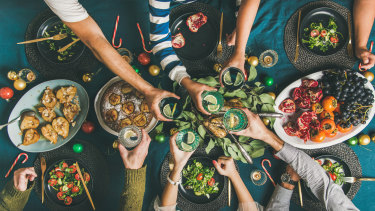 The food was pretty good and the conversation was outstanding.Credit:iStock

This dinner party was as lavish and entertaining as any Broadway show: there was mirth, music, and even mime. At one point I did my famous going-up-and-down-an-elevator-behind-the-kitchen-benchtop routine (the secret is a little “landing bump”. A lot of amateur kitchen-benchtop-elevator-mimers forget to do that. It makes all the diff). So our guests left looking happy and satisfied and mime-dazzled, but … no morning-after text.

It confused me. I began doubting myself. Was the purple Thai curry a little too lavender? Did I overuse the word “compounded”? For some reason I got hooked on the word and couldn’t stop. Why did you keep saying it, Danny, why???? Or maybe our friends just weren’t dinner-party match-fit, exactly like us, and they’d forgotten that fundamental post-party rule. So I prompted them: I sent them a text that said “Great catching up! Had a blast!”, and they immediately texted back “Ha! Agreed. A blast!”

It was good enough. I guess we’re all just a bit out of practice.

Danny Katz is a Melbourne humourist.

Danny Katz is a columnist for The Age and The Sydney Morning Herald. He writes the Modern Guru column in the Good Weekend magazine. He is also the author of the books Spit the Dummy, Dork Geek Jew and the Little Lunch series for kids.

Barcelona will not let go in January. The goalkeeper is Interesting to Arsenal
At the beginning of the Atalanta more goals than matches in the start. We explain how he and Gasperini get used to each other
Ex - Liverpool defender Flanagan is close to a move to Poland's Jagiellonia
Rodgers on 2-0 with Southampton: Should have scored more. Leicester are 2nd in the Premier League
Real Madrid may call up Castilla's top scorer Hugo Duro due to Jovic's departure
Covid at Ruiz's. The midfielder will not play for Napoli against Juve in the Italian Super Cup
Lampard on Hudson-Odoi: Callum is in great shape and will definitely get playing time
Source https://www.smh.com.au/national/the-morning-after-text-it-s-all-in-the-punctuation-20201127-p56ihi.html?ref=rss&utm_medium=rss&utm_source=rss_national

Summer of celebration not panning out as hoped for Lyon

Daughter charged with murder after man, 51, stabbed to death in Maitland

Perth train fares to be capped at $4.90 under a re-elected Mark McGowan

'This is insane': Tennis players unhappy in hotel quarantine

‘Enjoy the Freedom’: Orphaned Kangaroos Return to the Wild After Release by Animal Sanctuary

Clear messaging must be part of COVID-19 vaccine strategy

Miniskirts and mujahideen: how did Afghanistan come to be defined by war?

Stage set for Herzegovina to sizzle in summer feature

Remarque may be the best Golden Slipper pointer from pivotal weekend

AFLW practice match called off after injury to Giants player

Five great things: what to do in Melbourne this week

Despite a queer treatment HMS Pinafore feels a bit straight

Fears for man missing after swim in Brisbane River

Guatemala cracks down on migrant caravan bound for United States

Inside Twitter’s decision to cut off Trump

Is breakout Gades star our next Big Show?

Cyclone Kimi expected to strengthen and pummel coast from Monday

Demons flexible on move to hubs despite having other jobs, says coach

Joe the pigeon might give us happy ending we all need

Paul Capsis and iOta blow the lid off in Rapture

Circa lives up to their reputation for the astonishing in Humans 2.0

‘What the hell was going on there?’: Flanagan slams Roosters for axing him ‘out of nowhere’

COVID crisis in Amazonas as 1000 a day die in Brazil

Most vicious beating in UFC history

Two words that have enraged Beijing

Inauguration day, US earnings and central banks set to dominate week ahead for markets

Sicilian town offers fresh chance to snap up house for €1

Australia vs India LIVE updates: Series on a knife-edge on day three at Gabba

Maureen: Harbinger of Death catches you like a fly in a web of storytelling

‘Not racist at all’: Mum’s reaction to run

'If they're having a go at you, it's because you're good'

Man dies after being found with stab wounds in Maitland

They met, isolated together and then they fell in love

Quarantine vid freaks everyone out