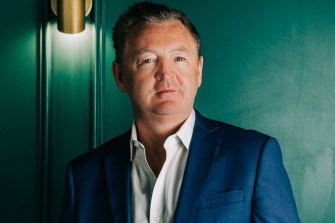 Luke Mangan: "After I qualified, I travelled, then settled in London. It was my escape."

I was very close to my maternal grandmother, Miriam Bailey, who passed away when I was 32. She lived in Croydon, about 20 minutes from us in Forest Hill [18 kilometres east of Melbourne’s CBD]. She was a fabulous cook and I remember the strong flavour of her trifle. The amount of sherry she put on the sponge was incredible!

My mother, Marie, was a trained nurse. She didn’t practise while I was a kid, as looking after seven sons was possibly a bigger job. She was always cooking, and I woke to the smell of stock being strained, of big stews being made. And when I became interested in cooking, we made cakes together, and then graduated to bread and soufflés.

School wasn’t great for me and I wanted to leave. My dad, William, a bank manager, wanted me to complete my HSC. But mum was supportive of me doing a cooking apprenticeship at 15. She was like, “Go and do what you want.” She was always there for me.

Mum could be feisty. Once, at the dinner table, my brother Tim said he didn’t want to eat his dinner. Mum had been cooking all day, and so picked up his plate and emptied it over his head. Everyone was silent. I was four years old but I’ll never forget that tension.

I was 14 when I had my first kiss – with Bernadette. I was at my aunty’s, practising cooking for dinner parties, and she was the waitress. After that evening we saw a few movies together.

My first proper relationship was with a girl named Kim. She lived in Portsea, the seaside Victorian town where I did the second half of my apprenticeship. We met through her mother, who was the laundry housekeeper at the hotel that housed the restaurant where I worked. We moved in together a year later.

Dad died when I was 19. He’d had a type of blood cancer. It was a tough time. After I qualified, I travelled, then settled in London. It was my escape. Kim came with me, but we broke up a year later: I was working 60- to 70-hour weeks at The Waterside Inn in Bray, one of the best restaurants in the world, while Kim was a nanny in London. I was in my own little world and probably didn’t think too much about how Mum was coping.

After a year I moved to a junior sous chef position at Launceston Place, South Kensington. While working in the butchery section, the kitchen manager introduced Lucy Allon as the new front of house. I thought, “Wow, she’s pretty.” I sent her notes in the dumb waiter asking for a date. Finally, she gave in.

Lucy is smart and determined, and in 1999 we opened Salt, our own restaurant, in Sydney. Nicole Kidman came with Tom Cruise. Kylie Minogue brought her mother for Mother’s Day. I was at dinner with Richard Wilkins a few years ago and Kylie was there. I didn’t realise how tiny she was until I saw a photo of the three of us.

The pressure of running Salt contributed to me and Lucy breaking up. I was a young chef; yelling and carrying on like an idiot. During that time we nearly went broke. We had almost 10 years together. Lucy is now married with two kids. She runs the Appetite for Excellence award program at my company, which nurtures young hospitality talent.

I met my wife, Belinda Achurch, while conducting cooking classes. We got married in 2015. Like any successful relationship, communication is key.

Mum remains the most significant woman in my life. She still lives in the family home in Forest Hill and we talk on the phone twice a day. Her short-term memory is not so great, but she’s in reasonable health.

When Mum came to Sydney, my brothers and I would take her on the P&O cruise ships, where I have my Salt grill restaurants. She still says, “I can’t wait to come up and go on a cruise.” Mum always sees the positive side, which is probably why she’s still going at 89. She’s a gutsy, determined woman.

Luke is currently focused on re-opening Luke’s Kitchen in Sydney after COVID.

This article appears in Sunday Life magazine within the Sun-Herald and the Sunday Age on sale October 25.

Balotelli is close to a move to Vasco da Gama. He was offered 2.5 million euros a year
Van Dijk - best Central defender of 2020, Trent-right, Robertson-left (ESPN)
Massimiliano Allegri: Ronaldo is a top player in terms of mentality. He has a new goal every year
Borussia Dortmund presented a collection with Spongebob as part of a deal with Nickelodeon
Woodward on Manchester United and trophies: there is a lot of work Ahead to achieve the stability needed
Neuer - best goaltender in 2020, Alisson-2nd, Oblak-3rd (ESPN)
Liverpool are Interested in 21-year-old Leipzig defender Konate
Source https://www.theage.com.au/culture/celebrity/the-motherly-advice-that-kicked-off-luke-mangan-s-career-20201021-p5676p.html?ref=rss&utm_medium=rss&utm_source=rss_culture