It's a good thing Rugby Australia chairman Hamish McLennan has lined up a who's who of business and sport to push Australia's case to host the 2027 Rugby World Cup. 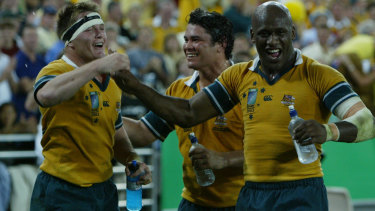 No cause to celebrate yet: Australia will need to sharpen its political edge to win the hosting rights for another World Cup.Credit:Jon Reid

The World Cup is about to get political again. Very political.

After the fiasco that was the 2023 hosting-rights process - which saw France win the bidding battle despite an official recommendation it go to South Africa, backed by an independent technical evaluation - World Rugby has been under heavy pressure to make changes.

In the next few months, the governing body will formalise those decisions and make them public. There was no mention of them overnight when World Rugby boss, the Australian Brett Gosper, spruiked the merits of awarding two consecutive men's and women's tournaments in one go.

But they're coming, and they'll effectively restore the hosting race to a democratic process.

The independent technical evaluation will stay, as will the council vote, which will see hopefuls vie for a majority of the 52 votes on offer in May 2022.

But a World Rugby board recommendation will likely be scrapped, making the decision a purely political one, with council members armed with the evaluation so they can make informed decisions.

World Rugby is getting out of the way and allowing the vote-wooing to take its natural course.

So McLennan, his new bid chief Kearns and their powerful board of advisers - Eddington, Howard, Coates and Eales, plus Gary Ella, Elizabeth Gaines and Olivia Wirth - better have their wits about them.

They will need to win hearts and minds. They will need to cajole council members, bargain for votes and trade favours. All after presenting a best-in-class commercial and business case that proves an Australian World Cup could be as good (read: lucrative) for World Rugby as it would be for Australia.

Australia has a poor recent track record on the politicking front.

The strength of Australia's bid is that it's a country that is a proven host of major events.

In 2018, RA sent a team to London to present to the council before a vote was taken on hosting rights for the 2021 women's World Cup. Australia had a superb bid centred around a Hunter-Newcastle tournament hub, backed by $10 million in federal and state government support, more than three times what rivals New Zealand could muster. They would bring the World Cup to a country in the middle of a women's sport boom.

Without a recommendation from the World Rugby board, the vote was won with an emotive pitch from the Kiwis, who put up former Black Fern Farah Palmer and All Black Mark Robinson to win over council members.

Palmer opened the presentation with a verse of the haka, later saying: "It made me feel like I had all of my whanau and my sisters with me while I was out there trying to do my best ... I just spoke from the heart, really."

For all of Australia's polish and groundwork, they were blown out of the water by a liberal pour of rugby romance and Kiwi aura. They also promised a World Cup final at Eden Park.

It was a bitter disappointment but a powerful lesson - there is no room for naivety in the bidding process. Build a case, by all means, but court those votes as if the game's future depends on them, and don't forget a sprinkling of magic.

McLennan will make further appointments in coming months and will not miss the hearts-and-minds angle. He and Kearns are both experienced networkers and deal-makers, while the presence of Eddington and Coates on the board will ensure all political angles are covered. Coates was recently re-elected as vice-president of the International Olympic Committee, while Eddington's time as British Airways chairman will bring a powerful network.

If they are smart, the Wallabies' Indigenous jersey and the team's modern identity as a multicultural brotherhood, reflective of wider Australia, will be front and centre.

"They've gone out hard and fast, they're assembling some really good people to advise them," Gosper told the Herald this week.

"The strength of Australia's bid is that it's a country that is a proven host of major events. Not least the Olympics but also a Rugby World Cup in the past. There's a lot of comfort in choosing a country like Australia, that works in their favour.

"Australia obviously has some good support from state and federal government so we know Australia will be a very strong contender."

The formal process starts in May next year, with the vote to go ahead in May 2022. The fact-finding period starts in February. Only Russia are confirmed rivals, pending an appeal against their ban from international sport.

RA is confident Australia is the leading southern hemisphere contender, after New Zealand, South Africa and Argentina all agreed to support their SANZAAR partner.

But Fiji and Samoa are new council members, while Oceania has two votes as a bloc. Japan's late switch to support France for 2023 - which came back to haunt them when South Africa would not support the Sunwolves' ongoing Super Rugby presence - is the case that proves no vote can be taken as banked. Until it is.

Call of nature, what can you do? Dyer explained why he ran to the dressing room during the match with Chelsea
Mourinho and Lampard shook hands before the penalty shootout. In the first half, they had a fight
Dest arrived in Spain to complete a transfer to Barca
Lionel Messi: I Am responsible for my mistakes. I wanted Barcelona to become stronger
Mourinho went to the dressing room in the 77th minute of the game with Chelsea to bring back Dyer, who was not replaced
Manchester City have announced the transfer of Ruben Dias from Benfica. Defender signed a 6-year contract
Zidane on Vinicius and Rodrigo's playing time: They're still boys. This is Real Madrid, these are the realities of football
Source https://www.theage.com.au/sport/rugby-union/the-world-cup-bid-changes-that-will-test-australia-20200814-p55lnh.html?ref=rss&utm_medium=rss&utm_source=rss_feed