Advocates for the elderly are warning of a hidden toll of abuse during the COVID-19 pandemic, as health fears and financial pressures converge to trap older Australians with perpetrators - often sons and daughters - leaving them at risk of exploitation and homelessness.

Seniors Rights Victoria manager Jenny Blakey said people hit with job losses and reduced work hours were moving into their elderly relatives' homes and promising to care for them, but instead racking up bills in the older person's name or pressuring them to guarantee loans.

"It becomes exploitative, rather than a choice," she said. 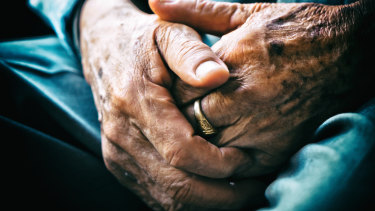 Older people are being exploited by relatives during the pandemic, advocates warn.Credit:iStock

"People are hitting up their parents or older people in their life to assist them financially," Mr Westcott said.

While such arrangements were often "nicely parcelled up as 'helping us out'", Mr Westacott said, they were often based on verbal agreements to repay the money that "may not eventuate."

Seniors Rights groups, along with the Australian Banking Association, are calling for a national register of powers of attorney to prevent fraudulent transactions and ensure that decisions are made in the older person's best interest.

Federal Attorney-General Christian Porter, who announced last year that he would lead the push for a national register at the Council of Attorneys-General, said he was still working with his state and territory counterparts towards implementing the scheme, recommended by Australian Law Reform Commission in 2017.

Mr Westacott said the cases he was seeing during the pandemic made the national register "more urgent".

One elderly woman who phoned the NSW Seniors Rights Service during the pandemic reported that her daughter and son-in-law had coerced her into signing over the title of her house, while another was left living in a caravan park after her family convinced her to sell her house.

The proceeds were placed in a joint bank account "for a rainy day", but the woman had not realised this meant she could not withdraw her own money without her grandson's signature. 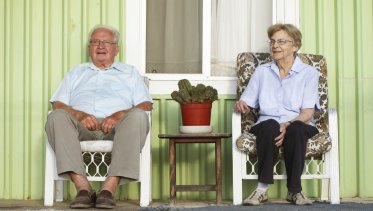 Elderly people are at risk of abuse during the pandemic. Credit:istock

An 85-year-old woman phoned the service after her adult grand-daughter, suspected of having a drug problem, moved into her house on the pretext of caring for her, instead leaving her three-year-old child with the older woman while she went out and then moving her boyfriend in without permission.

Ms Blakey said that while some Victorian hospitals had noticed an increase in presentations by elderly victims of physical abuse, call volumes to Seniors Rights Victoria's helpline had remained suspiciously flat.

"We suspect it's because people are less able to make contact, because they are under greater control of the perpetrator who's abusing them ... in a similar pattern to family violence," she said. "Once control has lessened, the calls will increase."

State governments do not report statistics on elder abuse victims who present to hospital, but social workers on Melbourne's Mornington Peninsula last week presented the local health service with data showing elder abuse presentations at hospital emergency rooms had spiked 59 per cent in a year.

Ms Blakey said, while health services were well placed to detect physical abuse, there was "not much intervention before it gets to that stage."

Housing for the Aged Action Group executive officer Fiona York said elder abuse was "a massively hidden problem" that became even more difficult to intervene in during the pandemic, as many older Australians were too frightened of the virus to reach out for help, even if they'd been reduced to couch surfing.

Mr Porter said that, while enduring powers of attorney were regulated by the states, "the lack of a national register has been identified as a weakness which leaves the elderly vulnerable to financial abuse."

"At the last Council of Attorney’s General meeting on July 27, participants agreed in-principle to the proposed broad policy design for a national register," he said.

"The Commonwealth was tasked to present a final proposal on the possible implementation and costing of the scheme and that work is ongoing."

Professor Briony Dow, director of the National Ageing Research Institute at the University of Melbourne's School of Population and Global Health, said 91 per cent of elder abuse was carried out by a family member, usually a son or daughter, with just nine per cent perpetrators in an intimate relationship with the victim.

Isolation experienced during the pandemic put older Australians at "increased risk", she said.

Ms Blakey said there had been a "mood shift" among callers to helplines during Victoria's lockdown, with heightened levels of anxiety and depression reported by those who found themselves trapped with their abusers - who often faced increased stress while dealing with their own mental health or substance abuse problems.

De Gea after 0-0 with Chelsea: Manchester United deserved more. The goalkeeper saved them
Lewandowski has scored every 37 minutes this Bundesliga season. He has 10 goals after 5 rounds
Azpilicueta about capturing Maguire: VAR can perform better. Why not take 20 seconds to review?
Real Madrid beat Barca at camp Nou for the first time since August 2017
Conte on Lukaku: in a year, he has improved in everything and has become different. I always called him an uncut diamond
Patrice Evra: Van de Beek doesn't need Manchester United. Why did we buy it?
Zidane on critics: We are not here to shut them up. We believe in what we do
Source https://www.theage.com.au/politics/federal/they-promised-to-look-after-their-elderly-relatives-instead-they-took-their-money-20200925-p55z4n.html?ref=rss&utm_medium=rss&utm_source=rss_feed

Thunder confirm they will take a knee during WBBL, Sydney derby washed out

4 Points: Tigers emphatically move on from 'an era of failure'

Man in critical condition after shark bite in north Qld

Berejiklian's approval rating high but her reputation has taken a hit

'The best-coached team that I've seen'

Over 50,000 masks at stadium as Sydney hosts biggest event since start of COVID-19

Barriers crucial for stars looking to soar in Golden Eagle

Race-by-race preview and tips for Newcastle on Monday

Richmond mindful of fans on lockdown after 2020 flag

'A big vote of confidence': Richards thrilled to keep Collett on Gytrash

'A carrot then a stick': Hospitality leaders slam Andrews

Buckhurst out of Melbourne Cup after 'disappointing' Cox Plate run

No crowds at this year's Melbourne Cup carnival

Dodgers fumble twice, Rays walk it off in bizarre finish to game four

Should Victoria be opening up now? Here's what readers are telling us

Dancers coast through the perils of working with natural splendour

How do you deal with this sort of disappointment?

'It popped': Houli played out grand final despite calf injury

Online festival proves you can make great opera in lockdown

Storm warning in place for Sunday afternoon, with possible hail

No regrets for Focus on Football leader amid Richmond dynasty

From the Archives, 1985: Uluru handed back to its traditional owners

Why everything looks Super for Jungle rumble

Classical music returns to Melbourne's stage with beauty and flair

What time does the NRL Grand Final start?

Traditionally a day for the faithful, on this Sunday Daniel Andrews prays for time

Have you seen Mark Robert Miller?

PM’s wife ‘unimpressed’ with his purchase

Some restrictions eased in Victoria

Developers ‘outbid’ by 103yo neighbour

Beyond Melbourne, the gyms are about to get a new workout