London: Astrology devotees are in uproar after a NASA website for kids about zodiac constellations gained traction on social media worldwide, throwing doubt on their star sign beliefs.

The four-year-old article talks about how the many constellations are defined and changed over time. It noted how the biggest constellation, Ophiuchus, the serpent-bearer, was left out by the Babylonians, when they defined the zodiac as 12 equal parts about three millenia ago. 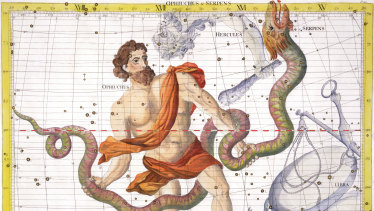 Constellation of Ophiucus from Atlas Coelestis, by John Flamsteed (1646-1710)Credit:Getty

Other cultures and traditions recognise as many as 24 constellations.

Ophiuchus — named after the ancient Greek word for "snake bearer" — straddles the celestial equator and comes into line for 18 days between November 29 and December 17.

Somehow this old post on the NASA website started circulating on social media this week, and then the mainstream media in the United Kingdom, leading to calls for astrologists to completely redraw the zodiac calendar.

Horoscope fans fear that they may have been following the wrong guidance all their lives, with Ophiuchus said to be clever, flamboyant but power-hungry.

Naomi Rowan, 22 said: "I couldn't sleep and found out that my star-sign has apparently changed and instead of a Sagittarius I am now an Ophiuchus. I'm not sure what the traits are, but perhaps it will make more sense to me than Sagittarius ever did."

The realignment has affected other star signs.

Mandy Southgate, from Kent, said: "No way I'm an Aries. Taurus forever. I'm going to ignore Ophiuchus just like I ignored Pluto not being a planet." 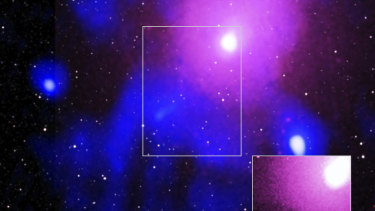 The Ophiuchus galaxy cluster viewed in a composite of X-ray, radio and infrared data. The bottom right image confirmed the record-breaking explosion created a crater so large it could hold 15 Milky Ways.Credit:NASA/AP

While it's not the first time the idea of Ophiuchus as a 13th zodiac sign has been put forward some astrologists are keen to stick to the status quo.

Sally Kirkman, a self-styled "consultant to the stars" from Blackpool, told The Daily Telegraph: "No one is going to have Ophiuchus as their star sign, it means nothing. All the star signs remain as they have since ancient times. In brief, Western astrology, which is the standard in many countries in the world, is based on the tropical zodiac.

"There is a beautiful symmetry in the 12 signs of the zodiac which ancients knew about and their hidden knowledge has been passed down throughout time.

"You won't find any accredited astrologer telling you that Ophiuchus is a star sign. Anyone who does tell you that it is a new star sign doesn't understand their craft."

With The Daily Telegraph (UK)

Lewandowski scored in 7 consecutive Champions League games. Only Ronaldo, Cavani and van Nistelrooy managed it
Langle scored Barcelona's 1st goal in the Champions League. In the fight for the ball, he pushed a Napoli player
Lewandowski scored his 12th goal in the Champions League. He leads the list of scorers
Paratici about Pirlo in Juve: A very natural decision
Fabio Capello: Have Pirlo is the advanced soccer idea. Perhaps too much
Gazizov about 2.5 million rubles a month for Ignatov: Crazy money, no one will give them. But I don't see any problems
Chelsea will release Bakayoko for 20 million euros. Milan is ready to pay 15 million or rent a midfielder
Source https://www.smh.com.au/world/europe/thirteenth-constellation-rewrites-the-stars-20200716-p55coq.html?ref=rss&utm_medium=rss&utm_source=rss_feed

'He gets his job done': Knights shift already a Green pasture after demolition of Tigers