Perhaps if Barnaby Joyce and John Barilaro had not been so hell-bent on allowing 60,800 hectares of native vegetation in 2018 being cleared in NSW there may have been no need for the SEPP to save koalas (''Fur and fury: why must we pay?'', September 13). Contrary to what Joyce suggests, the Premier has distanced herself from her deputy. Joyce cannot see the white-hot fury in the majority of the population who wish to save koalas not extinguish them. Lindsay Somerville, Lindfield

Joyce must think we city-dwelling Australians are mugs. We know where our fresh food comes from, and we know our long-term future depends on scientific and sustainable farming. His claim to represent country people in a war with city people is, of course, humbug. Just as Barilaro represents big land-holders and developers, Joyce speaks for big agribusiness, not the small land holders who form the basis of Australian horticulture. This deception has worked well for Joyce and the Nationals in the past. It is time that it ended. Norman Carter, Roseville Chase 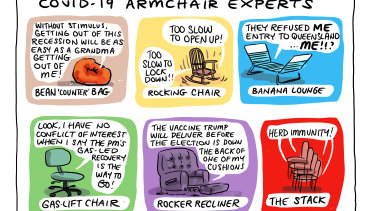 As a Sydneysider I love Joyce's idea of returning Sydney Harbour to its ''pre-white settlement of pristine beauty''. Bays back to sand and rocks, not turned into carparks for yachts or motor boats. I don't agree with much Joyce says but this is a beauty. Peggy Fisher, Killara

Thanks Barnaby Joyce for the koala analogy where the implied threat is that if NSW legislation triggers an environmental review of rural land proposed for alternate use, Sydney Harbour foreshores risk returning to pre-white settlement days. Another view is that Barilaro has a tin ear. He chose the wrong issue at the wrong time. His delivery was nothing more than crude blackmail. Taxpayers have a right to be affronted, whether politically engaged or not. Little wonder Barnaby’s on the backbench. Russell Murphy, Bayview

I am horrified to hear of the of the proposed last-minute amendment to the government’s strata law amendment bill (“Nail in the coffin of democracy”, September 13). The issue is not about pets or people’s rights to keep pets. Rather it is about communal living and communities having the right to make by-laws which govern the way in which residents wish to live. I am appalled that the government or members of any party would rush through an amendment such as this with absolutely no thought of the consequences to the people who have spent a considerable amount of money to buy into and live in communities. It is ridiculous to believe that “regulations will narrow its scope”. Complicated regulations only widen the scope for dispute. Jo Cooper appears to have purchased an apartment in a building which did not allow pets knowing that she intended to flaunt the by-law and is now trying to force her fellow residents to live in a way which they did not choose. What would you say if you lived in a house and the government sought to intervene in your living arrangements? What is more bizarre is the involvement of the Animal Justice League which feels that keeping a dog in a high-rise tower is justice. For who? Surely not the dog. Judith McDonald, Abbotsford

I really feel for the children living in houses so big that they feel isolated (“Uncrowded house: Sharing bedrooms and living spaces may benefit kids”, September 13). Here’s an idea, rent out a wing of your massive house to homeless people, or hire a small army of au pairs to fill up your mansion and give some of the destitute international students and workers stuck here with no money due to the pandemic some support. This is truly a first world problem that would seem to have some easy fixes. Barry O’Dwyer, Earlwood

The schlock of our lives

Like many Australians I had no interest whatever in the 2000 Olympics (''The single breathless minute that united a nation'', September 13). The 2000 opening ceremony was typical Aussie schlock - all that was missing were blowflies, lamingtons and crocodiles. Of course, Cathy Freeman was magnificent - our ambassador to the world. But then she never became a real ambassador, did she? Ambassadorships are reserved for party hacks like Alexander Downer, George Brandis, Joe Hockey. And we do have our first Indigenous minister, but as Minister for Indigenous Affairs - not foreign minister. What sanctimonious hypocrites we are - nothing but tokenism, weasel words and easy virtue. Michael Boylan, Glebe

Arteta about 0:1 with Leicester: I Don't know why the hell our goal was canceled. It is difficult to create space when 10 people are sitting behind the ball line
Rodgers on 1-0 with Arsenal: Leicester deserved to win. Vardy is a world-class player
Juve without Ronaldo could not beat Verona and Crotone in Serie A
Vardy has scored 11 goals in 12 games against Arsenal in the Premier League. Only Rooney has more
15,000 Teddy bears were planted at the Heerenveen match as part of a campaign to fight cancer. Toys sold for 230 thousand euros
Adidas and Pharrell Williams have reinvented the old forms of Real Madrid, Arsenal, Manchester United, Bayern Munich and Juve. The design is hand-made and celebrates imperfection
Barcelona filed a complaint about the refereeing of the match with Real Madrid to the Spanish football Federation
Source https://www.smh.com.au/national/nsw/tough-nutted-nats-up-a-gum-tree-on-koalas-20200915-p55vye.html?ref=rss&utm_medium=rss&utm_source=rss_national