US President Donald Trump says he will demand drug tests for this week’s debate with Joe Biden, in a new slur aimed at his Democratic rival’s mental capacity.

After weeks of attempting to sow doubt over the former vice-president’s state of mind, Trump stepped up his jibes today, tweeting that he was willing to take a drug test at the event – provided Biden does the same. 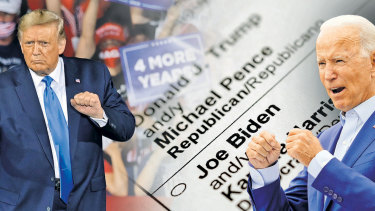 Donald Trump and Joe Biden are set to face off in the first of the Presidential debates this week.Credit:AP

“I will be strongly demanding a Drug Test of Sleepy Joe Biden prior to, or after, the Debate on Tuesday night," he said.

“Naturally, I will agree to take one also. His Debate performances have been record setting UNEVEN, to put it mildly. Only drugs could have caused this discrepancy???” 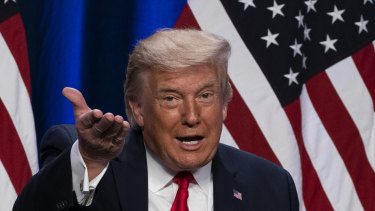 Respected Fox News Sunday anchor Chris Wallace will moderate proceedings, which will take place on Wednesday morning at 11am (AEST) and feature six topics over 90 minutes.

Both candidates will be grilled over their records, as well as the issues of coronavirus, the economy, election integrity, protests, and the Supreme Court nomination.

While Biden has spent much of his time behind closed doors in recent days prepping for the debate, Trump has continued with his gruelling schedule of travelling to battleground states for campaign rallies, where he often hits out at his political rival's work ethic.

“He’s a low-energy individual,” the President told a rally in Middletown, Pennsylvania yesterday – a seat that flipped to the Republicans in 2016. “You need a president with a lot of energy to deal with President Xi of China, President Putin of Russia, or Kim Jong-un [of North Korea].” 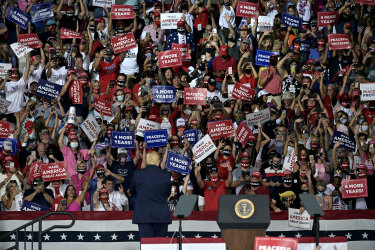 Donald Trump is trailing Joe Biden in polling he travels the country for campaign ralliesCredit:AP

It is not the first time that Trump has claimed without evidence that Biden uses drugs to enhance his debate performances, referencing his rival’s occasionally patchy performances during the Democratic primaries last year and earlier this year.

Biden, however, who is ahead in the polls, has generally laughed off the comments, describing them as an attempt by the President to deflect from his own problems, such as the global pandemic that has so far killed more than 200,000 Americans.

Trump, 74, became in 2017 the oldest person to assume the US presidency. If Biden, 77, wins the election he will take over that title.

The debate will take place as the confirmation fight over the Supreme Court intensifies this week, after Trump yesterday named 48-year-old Catholic conservative Amy Coney Barrett as the person he wants to replace liberal icon Ruth Bader Ginsburg.

While the nomination is likely to proceed because Republicans have the numbers in the Senate, Democrats have vowed to fight the process and use the issue to highlight what they believe is at risk, including abortion rights, immigration reform, and the Affordable Care Act, also known as Obamacare.

"In the middle of a pandemic, Donald Trump is trying to force through confirmation of a justice who will help him destroy Obamacare,” Biden tweeted yesterday.

"Health care is at stake. Protections for pre-existing conditions are at stake. We can't let them win."

Trump did little to allay those concerns, noting on Twitter: "Obamacare will be replaced with a MUCH better, and FAR cheaper alternative if it is terminated in the Supreme Court. Would be a big WIN for the USA!”

Our weekly newsletter will deliver expert analysis of the race to the White House from our US correspondent Matthew Knott. Sign up for the Herald's newsletter here, The Age's here, Brisbane Times' here and WAtoday's here.

Ronaldo has a bald haircut: Success is measured by the obstacles you overcome 😉 💪 🏽
UEFA on the European Premier League: She's bound to get bored. The Champions League is the best tournament in the world
Salzburg sold Holand and Minamino - and has already gathered new potential stars. The season started with 35 goals in 8 games
Sulscher twice outplayed Tuchel: first he mirrored the scheme (helped to contain), and then released Pogba in time (helped to add to the attack)
Barcelona - the first team to score for two 17-year-old players in a Champions League match
Atalanta's development has reached a crucial point: the club will soon turn into either Napoli or Roma. Miranchuk - a symbol of change
Sharonov joined the coaching staff of Cyprus Paphos
Source https://www.smh.com.au/world/north-america/trump-calls-on-biden-to-join-him-in-a-drug-test-for-presidential-debate-20200928-p55zsb.html?ref=rss&utm_medium=rss&utm_source=rss_feed