Washington: US President Donald Trump on Thursday, local time, signaled he might not accept rule changes for upcoming presidential debates which organisers have said will be needed to reign in unruly behavior.

Following a chaotic debate on Tuesday that saw Trump regularly interrupt and talk over his Democratic challenger Joe Biden as well as the moderator, America's presidential debates commission said it would adopt changes to allow for a "more orderly discussion" with the next debate scheduled for October 15 in Miami. 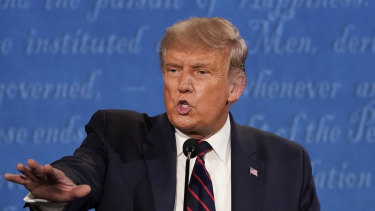 US President Donald Trump during the first presidential debate.Credit:AP

There was immediate speculation that this could include a mute button to limit the interruptions which plagued the initial encounter between Trump and Biden, the first of three before the November election.

But Trump asked in a tweet on Thursday: "Why would I allow the Debate Commission to change the rules for the second and third Debates when I easily won last time?"

He did not indicate whether a change in rules would affect whether he participated or not. Both campaigns agreed to the rules of Tuesday night's debate, which had envisioned six 15-minute sections in which each candidate had two minutes to answer a question before beginning back-and-forth.

The 90-minute face-off on Tuesday triggered widespread criticism of Trump and, to a lesser extent, Biden. The Republican president repeatedly bullied Biden and questioned his intelligence, while the Democratic nominee called Trump a racist, a liar and the worst president ever.

The two candidates will face off at the polls on November 3. While Biden leads Trump in most national public opinion polls, polls also show that the two are neck-and-neck in several states that could determine the winner of the contest.

More than 2 million voters have already cast ballots, with a surge of early and mail voting expected this year due to the coronavirus pandemic.

Lucescu on the Juventus defeat: Maybe 0:2 is a lot for such a match. We played very well
Pique may miss the match with Juventus due to removal in the game with Ferencvaros
Gnabry contracted the coronavirus. Bayern play Atletico tomorrow
Fati is the first in the history of the Champions League to score 2 goals under the age of 18
Messi scored in the 16th consecutive Champions League season and repeated Giggs' record
Bruno did not score a PSG penalty at the first attempt, but the referee asked for an Interruption due to Navas' exit from the goal line
Koeman is the fifth coach to manage 6 teams in the Champions League
Source https://www.smh.com.au/world/north-america/trump-signals-he-might-not-accept-changes-to-debate-rules-20201002-p5619a.html?ref=rss&utm_medium=rss&utm_source=rss_feed