Washington: US President Donald Trump says he will pick a woman to fill the Supreme Court seat left vacant by the death of Ruth Bader Ginsburg and expects to reveal his nominee this week.

Trump vowed to move rapidly to start the replacement process, telling a campaign rally in North Carolina on Saturday (local time), "I will be putting forth a nominee next week."

Trump and Republican Senate leader Mitch McConnell have both vowed to move quickly to fill Ginsburg's seat, but have not said if they intend to force an appointment before the November 3 presidential election. 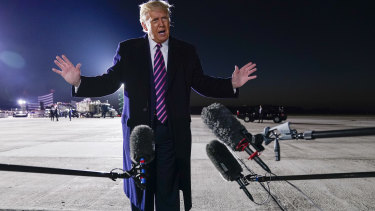 The confirmation process for a Supreme Court justice typically takes around three months, but there are just over six weeks remaining until election day. Even if they lose the White House and their Senate majority, Republicans could still fill the seat in the "lame duck" session that runs until January 3.

"It will be a woman – a very talented, very brilliant woman," Trump said at the rally in Fayetteville. "We haven’t chosen yet, but we have numerous women on the list."

Amy Coney Barrett, whom Trump previously appointed to the US Court of Appeals for the Seventh Circuit, is seen as the front-runner for the spot. 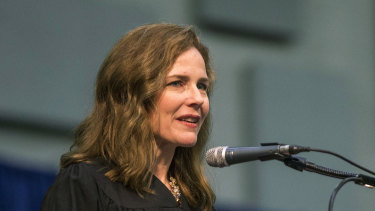 Barrett is a devout Catholic who has criticised the 1973 Roe vs Wade decision that legalised abortion across the US. She is only 48 years old – a factor that makes her especially appealing for conservatives given Supreme Court justices have lifetime terms.

Trump is also reportedly considering Barbara Lagoa, a Hispanic judge from Florida, and Allison Jones Rushing, who is in her late 30s.

Republican Senator Susan Collins – a moderate who is facing a tough re-election fight in her state of Maine – said that whoever wins the presidential election should nominate Ginsburg’s replacement.

Democrats would have to convince another three Republicans to join Collins to stop Republicans filling Ginsburg's seat on the nation's most powerful court by the end of the year.

The death of Ginsburg, a progressive icon who played a crucial role in the development of laws against sex discrimination in the US, has led to an outpouring of grief among Democrats and prompted a surge of donations to the party.

Democrats have accused Republicans of hypocrisy given they blocked Barack Obama from attempting fill a vacant Supreme Court seat in 2016 because it was an election year.

In a video to Instagram followers, New York congresswoman Alexandria Ocasio-Cortez pleaded with young voters to show up on November 3 rather than feel demoralised by Ginsburg's death.

"November is about survival," Ocasio-Cortez said. "Voting for Joe Biden is no longer about whether you agree with him. It's a vote to let our democracy live another day."

Some Democrats are already threatening radical steps – such as expanding the number of Supreme Court judges – if Republicans fill the seat this year. There have traditionally been nine judges on the Supreme court, but this can be changed.

"If Mitch McConnell and Donald Trump ram through someone from Trump’s horrifying shortlist during this legislative session, the next Congress must respond by expanding the Supreme Court," Mondaire Jones, the Democratic candidate for a safe House of Representatives seat in New York, said in a statement.

"We must expand the Supreme Court to 13 seats, and allow President Biden to fill those vacancies."

Yuran headed Khabarovsk SKA
Brugge forward Dennis on goal for Zenit: I said that I only score grandees, but it was a joke
PSG defender Kimpembe Pro 1:2 with Manchester United: We can only blame ourselves
Lopetegui Pro 0:0 with Chelsea: Sevilla showed a good team game
Rashford on victory over PSG: Manchester United now have a strong position in the group
Nagelsmann victory over Istanbul: Not fully satisfied with the game Leipzig was fatigue, not the most effective pressure
Goalkeeper Brugge Croat about 2:1 with Zenit: We proved that we should not be considered outsiders of the group
Source https://www.smh.com.au/world/north-america/trump-vows-to-nominate-brilliant-woman-for-supreme-court-this-week-20200920-p55xcn.html?ref=rss&utm_medium=rss&utm_source=rss_feed