Australia's coal miners are headed for a $17 billion collapse in export earnings this year as the shock of the coronavirus crisis persists and more Asian power utilities switch from coal to gas.

The projected declines across 2020-21, contained in a federal government report to be released on Monday, come after a succession of coal companies reported sharp full-year profit contractions including New Hope Corporation, which took a 69 per cent hit, and Whitehaven Coal which fell 95 per cent. 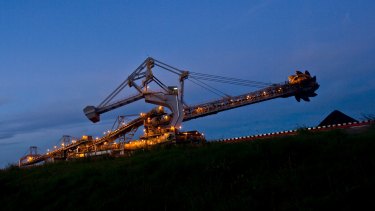 Swiss giant Glencore last week suspended operations at most of its coal mines in the Hunter Valley in New South Wales for at least a fortnight in a bid to curtail output in the face of falling demand.

Exports of metallurgical coal – the coal used in steelmaking – are projected to shrink 34 per cent from $35 billion to $23 billion as prices hover around four-year lows, according to the federal Industry Department, while thermal coal – used in power generation – is set to fall 25 per cent from $20 billion to $15 billion.

Describing the thermal coal market as "tumultuous", the report notes a combination of factors had driven thermal coal prices to levels not seen in 14 years. These included the virus-driven industrial downturn weighing on energy consumption, a hardening of China's import restrictions to support its local suppliers, and the ongoing transition away from coal-fired electricity to reduce emissions, the report said.

"At current prices, a significant proportion of Australian thermal coal production is loss-making," it said.

The benchmark price for top-quality NSW thermal coal has fallen from $US68 a tonne to less than $US55 this year, well below the average of almost $US100 a tonne over the 2019 financial year. At a price of $US50 a tonne, one-third of exports were cash-negative, the report said.

Analysts say although power demand in Asia's key coal centres had returned to year-ago levels after collapsing by as much as 30 per cent during the depths of the lockdowns, the thermal coal market still remained deeply challenged.

"One issue is that there has been a significant amount of demand destruction between March and June that leaves us with an overhang of supply that we've got to burn through before we can see a decent recovery," Wood Mackenzie Asia-Pacific head of coal Rory Simington said.

"But just as important are those other structural issues in play prior to the pandemic – historically low gas prices that have decimated coal demand in Europe, Chinese import quotas, and the longer, slow-burn of pressure from renewables."

The thermal coal market has been badly affected by Chinese government policies to avoid seaborne coal. While unofficial limits are often imposed by Beijing as a way to support its domestic miners, a souring of diplomatic relations between China and Australia this year over calls for a coronavirus inquiry prompted the Chinese government to instruct utilities to avoid Australian coal in particular

In the past fortnight, however, analysts have noted greater Chinese appetite for Australian cargoes, lifting benchmark prices to $US59. Mr Simington said the trend was "surprising", but it was to soon to tell if it was sustainable

Slumping coal exports and softer prices for other commodities have led to the federal government downgrading forecasts for overall resources and energy export earnings to $256 billion in 2020-21 and $252 billion for 2021-22 – a steep reduction from last year's record-high $290 billion.

Federal Resources Minister Keith Pitt said the figures, although down on last year, were impressive and demonstrated the resilience of the mining industry amid unprecedented challenges of COVID-19.

"Robust commodity earnings will be more important than ever to the Australian economy as the country emerges from the largest global contraction since the 1930s," he said.

"Australia's reputation as a reliable, low-cost supplier of mineral and energy products remains
intact, with virtually no operational COVID-19 shutdowns, unlike some of our competitors."

Among Australia's best-performing commodities is the steelmaking ingredient iron ore, which has surged above the sky-high price of $US120 a tonne amid robust demand from Chinese steel mills and weakening supply from other exporting nations such as Brazil. The report forecasts iron ore to achieve $97 million alone in yearly export earnings, just shy of last year's record $102 billion.

Gold exports have also performed exceptionally well and are forecast to reach a record high of $31 billion in 2020-21, becoming Australia's third-largest commodity export behind iron ore and LNG.

La Liga President on Messi's departure: It won't be a drama for us. And his reputation will suffer
Ronaldo is a fan of the UFC. Rooting for Khabib, training with Conor, signed up for all the top fighters
Only Milan have not lost points this season in the top 5 of the European leagues. Aston Villa lost 0:3 in the
🎮 We made a game about Khabib - fight for him and try to fill up Geiji
Tebas about klasiko: the Game of the best teams in the world. The most important match of club football
Leeds forward Bamford scored a hat-trick. He has 6 goals in 6 Premier League games
Moyes on the spectators in the stadiums: People watch matches in cinemas, why can't they do it on the street?
Source https://www.theage.com.au/business/companies/tumultuous-time-australia-s-coal-miners-face-17b-export-collapse-20200925-p55z7d.html?ref=rss&utm_medium=rss&utm_source=rss_feed

'Quite an active day': Strong winds and thunderstorm warnings for Sydney

‘I Didn’t Freak You Out, Did I?’ Oklahoma Police Pull Drivers Over to Give Out Cinnamon Rolls

Manhunt after man stabbed in the back

‘IT’S GOING AWAY’: US shatters coronavirus record in a single day

Where the US election will be decided

The travel photographer who follows colours over fashion trends

US faces half a million COVID-19 deaths by end of February, study says