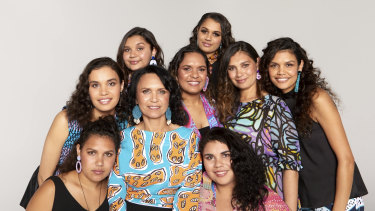 When the first season of Family Rules began filming in 2016, Shenika Bennell – second eldest of the Rule daughters – already had a bit of reality TV under her belt. The year before, she’d been one of the contestants in modelling competition The Face Australia. “It was different!” she laughs. “I had to get used to the camera always being there. But I love modelling, so it didn’t put me off.”

It meant that when the observational documentary about Shenika, her eight sisters, and her mother Danielle got under way, she was able to give the younger girls the benefit of her experience. “At the start of season one we all got together and I said: ‘No acting – what you see is what you’re gonna get’.”

The advice certainly took. One of the pleasures of Family Rules is how natural all the girls are in front of the camera – and how little we get of the tears and tantrums that are the bread and butter of other soft-scripted shows. Sure, the sisters argue. Quite a bit. But there’s nothing ugly or personal. On the contrary, one of the defining characteristics of the series is how functional the Rule family is.

Which is not to say it was all smooth sailing.

“I think we all struggled with different aspects,” Bennell says. “I guess all my sisters have their little things they found hard. A lot of them are really shy. I know I struggled when it came to parenting. There’s a bit of pressure – everyone has an opinion on parenting. But in the end I thought, this is how I parent and I’m happy with it.”

On the whole the entire family has tried to be open about who they are and how they live. But in the current season Bennell had to fence off a couple of no-go areas. As season three opens, she’s heavily pregnant. By the end of the first episode she has a new baby girl. We know her mother and her husband Trent were both there for the delivery. “But when I was first approached about season three I said straight away: No labour (on camera). No delivery. It’s not culturally appropriate. Men don’t need to see that.”

What we do see every season are the ways in which the family incorporates traditional culture into their lives. “It’s very, very important that my kids (Bennell now has four) grow up knowing their culture. My children have that Noongar connection through their father. And my mum’s Noongar too. But with my dad’s culture – it’s important for me to take them back to Norseman. Because he is no longer with us, he’s not around for us to ask him things. So I want to be able to teach them as much as possible.”

She says there’s no particular conflict between the two worlds the family inhabits. Rather, the Bennells and the Rules face the same challenges the rest of us do in finding time for the things that really matter. She and her husband both work. There’s a mortgage to pay. “But I was just saying to Trent this morning that I haven’t been back to Norseman for a while. Life takes over. You get busy. It’s just about realising it is important, and putting aside that time to be able to get back on to country.”

Lovren will make his debut for Zenit in the match against Loko, Lunev will not play due to injury
Real buy players if we sell Bale (ESPN)
Novikov on the composition of Dynamo: the Management is ready to go to strengthen
Pedro will miss a month after shoulder surgery
Agent gencha: He passed the medical examination. I think he will sign a contract with CSKA on Tuesday
Lewandowski on Chelsea: They are playing very well, but we are Bayern
Juventus wanted to sign defender Akieme, but Barcelona refused
Source https://www.smh.com.au/culture/tv-and-radio/tv-lead-story-mmag-12-july-20200701-p557wm.html?ref=rss&utm_medium=rss&utm_source=rss_feed