The University of Queensland is now officially running on 100 per cent renewable power, with its major solar farm at Warwick coming online.

The 64-megawatt solar farm has already been brought online after two years of development and will be officially opened on Friday, marking a major milestone for the university. 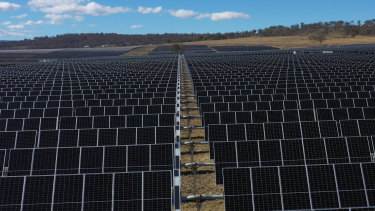 UQ's new solar farm at Warwick is being officially opened on Friday, completely offsetting its power use.

UQ vice-chancellor Peter Høj said the university is now the first in the world to have its entire energy consumption offset by renewable energy.

"As an institution we wanted to look at how you could use renewable energy sources in a more stable fashion," Professor Høj said.

"It’s about being a knowledge leader, and learning from that and inspiring people to take up the technology themselves."

The $125 million project is predicted to produce 160,000 megawatt hours of power a year, the equivalent of taking almost 50,000 cars off the road for a year or avoiding burning more than 20,000 tonnes of coal.

It’s also enough to fully power 27,000 average homes, which it will likely do as it will hook into the state’s energy grid directly.

Rather than offsetting the university’s power consumption directly, the Warwick plant, along with the smaller existing plant at Gatton, now produce enough power feeding into the main grid that it equals and could potentially exceed the power the university uses across all its campuses.

The money generated by selling power into the grid is also expected to completely offset UQ’s $20 million annual power bill.

Professor Høj said the solar farm was the sort of project that a university could lead the way on, because they could afford to try out new technologies to prove to the private sector that they were viable.

"We can afford to do something that is not entirely viable from the start, and make the mistakes, and say to people we tried that one, that one worked, don’t go down that rabbit hole," he said.

In addition to being an asset for the university, it is also a teaching tool, with engineering students due to be sent to the facility as part of their course material, as well as more unusual collaborations.

"The farm is actually in fields and so there is a lot of grass, so the problem you have is how do you keep the grass down?" Professor Høj said.

"Because we run an agricultural campus, we’re sending sheep in. And the sheep really liked it because not only is there lots of grass, but in the heat of the day they can lie in the shade of the solar panels."

Professor Høj has overseen the drive to get the university off the grid over the last few years, first through the installation of rooftop solar arrays on campus buildings, and more lately through the use of industrial battery systems to store power.

He is due to retire at the end of the month, and says being able to achieve the project’s goal is the perfect final note before heading off into the sunset.

"Renewables will, in my view, be an incredible asset for Australia, but we’ve got to learn it so it makes a lot of sense," he said.

"Because once you have cheap energy it opens up so many possibilities."

Barcelona believes that Messi will be fit for the 1/4 final of the Champions League, despite being bruised in the match against Napoli
Nagelsmann on rejecting Real Madrid in 2018: I Didn't think going there was the right move
Ole Gunnar Solskjaer: We will see a better Pogba in the coming seasons. He is approaching the peak
Lothar Matteus: Bayern need to make a lot of mistakes to lose to the current Barca
Pedro said goodbye to Chelsea: it Was an honor to play for the club and be a member of a big family
Tammy Abraham: Lewandowski is the best striker in the world
Dinamo Brest will play Astana, Celtic will play CR Reykjavik in the 1st round of Champions League qualification
Source https://www.smh.com.au/national/queensland/uq-now-on-100-per-cent-green-energy-with-warwick-solar-farm-20200716-p55csn.html?ref=rss&utm_medium=rss&utm_source=rss_national