More than 60,500 new COVID-19 infections were reported across the United States on Thursday, according to a Reuters tally, setting a one-day record as Americans were told to take new precautions and the pandemic becomes increasingly politicised.

The total represents a slight rise from Wednesday, when there were 60,000 new cases, and marks the largest one-day increase by any country since the pandemic emerged in China last year. 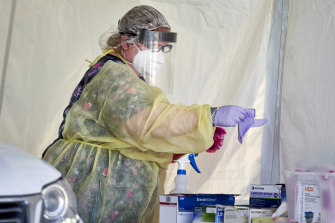 A nurse prepares to administer a coronavirus test in Nebraska this week.Credit:AP

As infections rose in 41 of the 50 states over the last two weeks, Americans have become increasingly divided on issues such as the reopening of schools and businesses. Orders by governors and local leaders mandating face masks have become particularly divisive.

"It's just disheartening because the selfishness of (not wearing a mask) versus the selflessness of my staff and the people in this hospital who are putting themselves at risk, and I got COVID from this," said Dr Andrew Pastewski, ICU medical director at Jackson South Medical Centre in Miami.

"I know we've had a lot of different blips," DeSantis said. "We're now at a higher blip than where we were in May and the beginning of June."

Florida is one of the few states that does not disclose the number of hospitalised COVID patients. But more than four dozen Florida hospitals reported their intensive care units reached full capacity earlier this week.

In Texas a group of bar owners sued Governor Greg Abbott, a Republican, saying his June 26 order closing them down violates the state constitution, the Dallas Morning News reported.

Dr Robert Redfield, director of the US Centres for Disease Control and Prevention, said on Thursday that keeping schools closed would be a greater risk to children's health than reopening them.

California and Texas, the two most populous states, announced record increases in COVID deaths on Wednesday.

California has seen cases and hospitalisations surge, even though it imposed one of the strictest lockdowns.

Dr Anthony Fauci, the top US infectious disease expert, said on Friday that he has not briefed President Donald Trump in at least two months and not seen him in person at the White House since June 2, despite a coronavirus resurgence that has strained hospitals and led several states to pause reopenings.

Fauci told the Financial Times he was "sure" his messages were sent to the President even though the two have not been in close contact in the past several weeks.

The comments from the Trump administration's director of the National Institute of Allergy and Infectious Diseases came as Trump has been critical of Fauci and spoken openly about issues on which they disagree.

In a Thursday interview with Fox News' Sean Hannity, Trump said Fauci had "made a lot of mistakes" but called him a "nice man." Trump also said "most cases" of coronavirus would "automatically cure. They automatically get better".

Fauci also in the Financial Times interview said Trump was incorrect in claiming 99 per cent of coronavirus cases were "harmless" and may have conflated some statistics.

"I'm trying to figure out where the President got that number," Fauci said. "What I think happened is that someone told him that the general mortality is about 1 per cent. And he interpreted, therefore, that 99 per cent is not a problem, when that's obviously not the case."

The World Health Organisation reported a record increase in global coronavirus cases on Friday, with the total rising by 228,102 in 24 hours.

The biggest increases were from the US, Brazil, India and South Africa, according to a daily report. The previous WHO record for new cases was 212,326 on July 4. Deaths remained steady at about 5000 a day.

Global coronavirus cases exceeded 12 million on Wednesday, according to a Reuters tally, marking another milestone in the spread of the disease that has killed more than 555,000 people in seven months.

Maria Van Kerkhove, technical lead on the COVID-19 pandemic at the WHO, also said on Friday that airborne transmission of the new coronavirus had always been a concern but that droplets appeared to be the most common infection route.

"Aerosol transmission is one of the modes of transmission that we have been concerned about since the beginning, particularly in healthcare settings ... where we know these droplets can be aerosolised - which means can stay in the air longer," she told an online briefing from Geneva.

The WHO released new guidelines on the transmission of the coronavirus on Thursday that acknowledged some reports of airborne transmission but stopped short of confirming that it spreads through the air, a route that cannot be blocked by the social distancing now common around the world.

The Andean country has reported just under 134,000 cases of COVID-19 and 4714 deaths. More than 32 per cent of cases have occurred in the capital, along with a fifth of deaths. 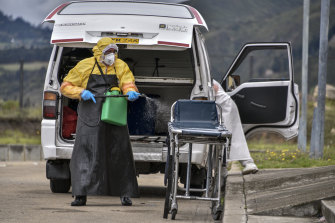 A funeral worker sanitises equipment used to transport the body of a person who died from COVID-19 in Bogota.Credit:Getty Images

"Nobody in Colombia has the same challenge we do," Mayor Claudia Lopez said in a video broadcast.

The measures are a return to those declared in late March by President Ivan Duque as part of an ongoing national quarantine. The lockdown is set to continue until August 1, but many restrictions have already been lifted, especially in municipalities without any recorded COVID cases.

British Prime Minister Boris Johnson said tighter rules on wearing face coverings may be needed to stop a resurgence in COVID-19 infections, and that he would like to see them worn more frequently in shops in England.

"I do think we need to be stricter in insisting that people wear face coverings in confined places where they are meeting people that they don't normally meet," Johnson said in a pre-recorded question-and-answer session with the public.

Britain has Europe's highest coronavirus death toll, with almost 45,000 confirmed deaths, and weekly figures on Friday showed a small rise in the COVID-19 reproduction rate, although the number of new infections continues to fall.

People in England are only required to wear face masks on public transport and when visiting hospitals, but on Friday Scotland made it compulsory to wear them in shops as well.

Just over half of British adults who left their homes last week wore a mask, rising to 89 per cent of people on public transport, according to official data published earlier on Friday.

Coach Of Brentford: We went from a mid-level team to the third team of the season. This is an incredible achievement
Burnley are not going to sell Tarkowski for less than 50 million pounds
Lester wants to rent Trincou at Barca with the obligation of ransom for 50 million pounds
Scott Parker: Fulham have a lot to progress. And I am happy about it
Manchester United are threatening to pull out of negotiations for Sancho if Borussia do not reduce the price from 120 million euros
Cesc about Casillas: You are a mirror to look into
Lone mascots are another symbol of the year
Source https://www.theage.com.au/world/north-america/us-sets-one-day-record-with-more-than-60-500-covid-19-cases-20200711-p55b3g.html?ref=rss&utm_medium=rss&utm_source=rss_feed

A ‘WORRYING WORLD’: Aussies need to prepare for life without vaccine

Councils to tap into $250m pool for public spaces

Victoria's fate will be ours without renewed lockdown

Data centres in hot demand with remote working on the rise

Virus reminder: governments need to be better, not smaller

Your Daily Horoscope for Wednesday, August 5

The career investment that’s worth more than money

Tim Minchin has his eye on $10m mansion

Be wowed by this jaw-dropping transformation