All but one of Australia’s top-ranked universities slid down the international rankings this year, as their recognition among global academics and employers declined.

The University of Melbourne was the only tertiary institution in the world’s top 50 to buck the trend, rising four places from 37th to 33rd in the 2023 QS rankings. 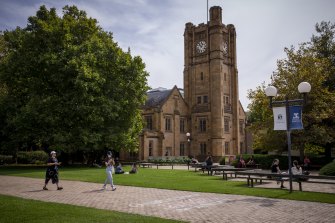 The University of Melbourne has risen to 33rd in the world in the QS global rankings.Credit:Wayne Taylor

QS Quacquarelli Symonds, a global higher education analyst that has ranked the world’s universities annually for the past 18 years, said two years of closed borders had caused two-thirds of Australian universities to lose international students proportionally and 79 per cent to experience a proportional decline in international academics.

Although Australian universities “enjoy a solid global reputation”, all but one of the 38 universities QS ranked had suffered a decline in reputation since last year, the company said.

But these falls were countered by an improvement in the impact and influence of most universities’ research, which was key to many universities outside the top 50 increasing their overall ranking.

The Australian National University in Canberra retained top spot among Australian tertiary institutions but slipped from 27th to 30th and is now just three places ahead of Melbourne. 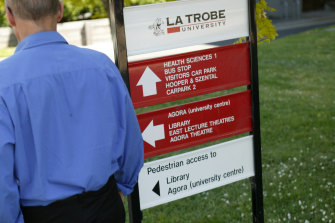 La Trobe is the biggest improver among Australian universities in this year’s global rankings.Credit:Erin Jonasson

QS said La Trobe’s rise was “extraordinary” and mainly due to its increase in academic citations per faculty.

“La Trobe University has grown its research output by 37.7 per cent since 2016, nearly three times the national average (13.1 per cent),” the company said in announcing the results.

The university produced highly cited research in medicine, in fields including disability management and cancer. La Trobe was not the only Victorian university to make impressive gains. Deakin jumped 17 places to 266 and Swinburne jumped 25 places to 296.

Victoria University, which has its major campus in Footscray, was the only Victorian institution to fall, dropping 100 places from the 601-650 grouping to 701-750.

Angel Calderon, RMIT University’s principal adviser in institutional research and a QS board member, said Australian universities had performed better in the rankings over the past two years than many had expected, given their heavy losses of international students and staff cuts in the pandemic.

But he said their declining international reputation should not be dismissed.

“It’s the third consecutive year we are seeing a weakening in our reputational scores. The previous two years it was a slight decline, but this year it’s bigger, so we’d better pay attention to this,” Calderon said.

He said Australia’s solid university rankings were mainly attributable to doing well in having research widely cited and used.

But he said universities’ capacity to research is under pressure, given international student fees cross-subsidise the cost of research.

QS’ report is among a number of global university rankings released annually. The Massachusetts Institute of Technology was ranked first, for the 11th consecutive year, followed by Cambridge in Britain and Stanford in the US.