Village Roadshow has secured a further $70 million in funding from its banks and the Queensland government as coronavirus pandemic-related restrictions continue to put financial pressure on the family-run business.

The theme park and cinema operator, which is in exclusive takeover talks with private equity firm BGH Capital, told the ASX on Thursday that it was still losing money despite re-opening Sea World and Warner Bros Movie World. It said that the new funding from the lenders and the Queensland Treasury Corporation would be used to keep the business operating over the next 12 months. 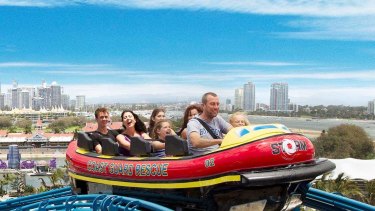 Sea World on the Gold Coast has re-opened, but parent company Village Roadshow is still strapped for cash.

The company's theme parks were given the go-ahead to reopen at 50 per cent capacity after three months in June. The restrictions, which forced the company to close the parks, wiped about 80 per cent off the company's value and pushed its shares down to a near-decade low of 77 cents.

Village, which had net debt of $280 million at the end of the last financial year, also announced a $35 million shareholder equity raise on Thursday to improve liquidity. The raise needs to be completed by February next year or, in the event a deal with BGH does not occur, three months after termination of a transaction.

The company has been in exclusive negotiations with BGH about a takeover since May when it received a $2.40 non-binding proposal. Talks have been extended four times. But in the event the talks lead to a transaction, the deal could be blocked by Village’s largest independent shareholder, Mittleman Brothers. The New-York based fund manager has previously said a sale at a $2.40 a share offer would be “shameful”.

Citi downgraded Village from buy to neutral on Wednesday, warning that the theme park industry could take longer to recover than anticipated and that there were risks surrounding the BGH bid.

An investors note said that an international deal between cinema chain AMC and Comcast - which will shorten the gap between a movie’s theatre release and its availability for home viewing to less than three weeks - could have a negative impact on Village’s exhibition business and impact cinema attendance.“

Lampard on relegation from the League Cup: we Need to keep a positive attitude. Everything will come if Chelsea score second, leading the score
Call of nature, what can you do? Dyer explained why he ran to the dressing room during the match with Chelsea
Mourinho and Lampard shook hands before the penalty shootout. In the first half, they had a fight
Dest arrived in Spain to complete a transfer to Barca
Lionel Messi: I Am responsible for my mistakes. I wanted Barcelona to become stronger
Mourinho went to the dressing room in the 77th minute of the game with Chelsea to bring back Dyer, who was not replaced
Manchester City have announced the transfer of Ruben Dias from Benfica. Defender signed a 6-year contract
Source https://www.smh.com.au/business/companies/village-roadshow-secures-70-million-lifeline-20200806-p55j8j.html?ref=rss&utm_medium=rss&utm_source=rss_feed

As the rest of the world limps along, China’s economy is surging

Japan photo creeps the world out