Football-starved fans from across the state will finally get their taste of AFL action from next week when the first of several rounds featuring rotating interstate clubs kicks off at Optus Stadium.

The real thirst for action will be quenched next Sunday, when Fremantle and West Coast mark their return home in a Western Derby clash, with their supporters also granted first dibs on stadium supplier Gage Roads' new Pipe Dreams Coastal Lager. 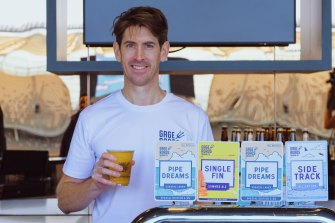 Brewing on the aptly named lager from the Palmyra-based brewery was finished just in time for the 51st clash between the cross-town rivals, with a sell-out crowd of 60,000 people expected – should WA move to phase 5 restrictions on Friday.

Gage Roads and fellow stadium supplier Mrs Macs will also relish the return of AFL in Perth after 119 long days that left the industry and fans frustrated and in fear football might not be played at all in WA this year.

The craft brewer has reported an uptake in takeaway sales of its range of craft beers during the pandemic and wanted to celebrate footy's return to the $1.8 billion stadium.

WA footy fans would be the first in the country to try the new beer before it was made available nationally from August.

"Pipe Dreams is inspired by the traditional European style, so it has a light colour with traditional noble hop aromas and a light citrus zest over the top," head brewer Ross Brown said.

"It’s all natural with no preservatives or additives, brewed with nothing more than water, hops, yeast and malt."

The brewery produces 14 million litres of beer each year and has installed new equipment from Germany that gives an unparalleled level of sophistication for any craft brewery in Australia.

Gage has not been quiet in isolation, brewing two limited releases from its Atomic Project range.

The Cryo Red Alert is a red ale supercharged with Amarillo and Centennial Cryo Hops for an intense floral and earthy red ale.

Project brewer Nick Ivey said cryo hops were becoming a favourite among craft brewers because of the intense aromas and flavours they produced.

The hops are created by concentrating the lupulin and essential oils in the hop flower and removing most of the vegetable matter.

Gage's second release, Loop the Lupe, was the first beer the brewery had made using only cryo hops, a challenge it was keen to tackle.

Thursday's clash between Geelong and Collingwood would be the first in Perth featuring two non-WA teams and, for Mrs Macs, a chance to showcase a WA pie to Victorian football fans, who are offered only Four'n Twenty products at fixtures back home.

Optus Stadium staff have spent the past few months in preparation for the return of its boutique client.

"We have undertaken a deep clean of retail and premium product spaces, installation of sanitising stations, sanitising of all equipment and areas, upgrades to stadium security and CCTV systems and decommissioning and now recommissioning of all electrical equipment and infrastructure that had meant big savings in utility consumption," chief executive Mike McKenna said.

The Queen + Adam Lambert concert on February 23 was the venue's last event.

“Football is a major avenue for the people of WA to connect with family and friends, it’s a key component of our community and culture and an opportunity for outdoor social activity and engagement,” Mr McKenna said.

Optus Stadium also employed 3000 casual staff, 300 security and 200 cleaners, with 60 per cent of staff female, a demographic hard-hit during COVID.

Javier Mascherano: Messi is the main reason why Barcelona can beat any team
Barcelona is looking for a new coach. Pochettino, Koeman, Xavi are among the candidates (ESPN)
I just want to show you my dog. Klopp's cute video call to the Liverpool newcomer
Willian to Arsenal: third client Kia Joorabchian over the last year, for the contract was reduced officers of the club
Tiago Alcantara-Messi among the Midfielders. His ball movement and control of matches is an aesthetic pleasure
Yeovil of England's 5th division about De Gea: No, I'm not Interested. Sorry, David
Henderson is the best player of Liverpool in the 2019/20 season
Source https://www.theage.com.au/national/western-australia/wa-footy-fans-get-first-taste-of-new-optus-stadium-brew-as-afl-returns-west-20200626-p556ih.html?ref=rss&utm_medium=rss&utm_source=rss_national