Western Sydney Wanderers are doing their best to prevent rivals Sydney FC from lifting the A-League premiership, going so far as lending their training pitch to Wellington Phoenix this week ahead of the New Zealanders' meeting with the Sky Blues.

A Sydney win against the Phoenix in Friday night's A-League re-opener will effectively seal them the premiers plate. Third-placed Phoenix, who have six regular-season matches to play compared to second-placed Melbourne City's three, can still displace the Sky Blues on goal difference but would have to win their final five games and hope Sydney lose their last five to pip the Sky Blues ot the premiership. 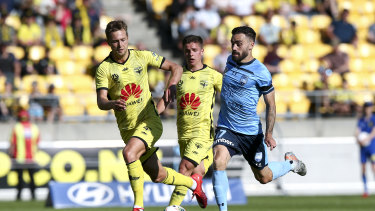 Sydney FC's match against Wellington will be the new re-opener. Credit:Getty

However, Wellington's ambitious quest to stop Sydney has been given a helping hand from their fiercest rivals Western Sydney, who have given Wellington access to their state-of-the-art training field. A Wanderers spokesperson said the club offered the Phoenix use of one of their four training fields in Blacktown for the week leading into the clash, after Wellington were forced to vacate their previous training ground at Football NSW's base in Glenwood.

The Phoenix began training in Blacktown on Sunday after making way for Western United to arrive at Glenwood and undergo their quarantine. Wellington's match against Sydney at Netstrata Jubilee Stadium in Kogarah is set to be the new season re-opener after the forced quarantine of the Victorian clubs in Sydney prompted the postponement of Thursday night's match between Western United and Melbourne Victory. That fixture will be one of many rescheduled in a revised draw set to be released on Tuesday.

“The final schedule will be released tomorrow with no impact to this weekend’s games and minimal changes excepting Melbourne-based teams, A-League boss Greg O'Rourke said. "Fans will be able to attend selected matches in line with government guidelines and I look forward to the teams returning to the business of playing football.

“The revised Hyundai A-League regular-season schedule will recommence on Friday 17 July with Sydney FC facing Wellington Phoenix at Netstrata Jubilee Stadium and will be open for a limited number of members and fans to attend."

The three Victorian teams are training while in quarantine in Sydney's west, staying at Football NSW's facility in Glenwood and at the Marconi Club in Bossley Park.

In Romania, a special champion: everything was decided in the match, the format of which was chosen 3 hours before the whistle
Danny rose: I was stopped by the police last week: is This a stolen car? Where did you get it?. And this happens regularly
Barcelona refused to sell for 60 million euros Trinca u, bought from Braga for 31 million. The club count on him
Chelsea will compete with Everton for Regilon. Real Madrid is ready to sell him
Espanyol asked La Liga to cancel the flight. The Catalans have been in the relegation zone since the fifth round
Inter have not yet decided on Conte's future. Everything will be decided after the Europa League
Haji resigned as Viitorul's coach
Source https://www.theage.com.au/sport/soccer/wanderers-slight-sydney-fc-by-giving-pheonix-use-of-training-base-20200713-p55bno.html?ref=rss&utm_medium=rss&utm_source=rss_feed