The WBBL's eight clubs are taking part in a Indigenous barefoot circle ceremony instead of taking the knee as part of a player-driven initiative to start the tournament on Sunday.

As Australian sport grapples with how to acknowledge the Black Lives Matter movement, the country's female cricketers are continuing a rite that started last season. 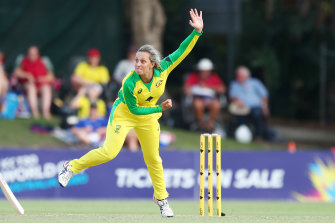 Australia star Ash Gardner, who is of Indigenous heritage, took part in a barefoot ceremony with other WBBL players on Saturday.Credit:Getty Images

A group of 15 players, including the five Indigenous players in the league – Ash Gardner, Hannah Darlington, Anika Learoyd, Ella Haywood and Mikayla Hinkley – and eight club captains took part in a barefoot ceremony on Saturday.

They then decided players from each team would conduct their own circles before games on Sunday.

The national men's team was slammed by West Indies great Michael Holding for not taking a knee during the tour of England.

England captain Heather Knight had urged WBBL players to take a knee but her Australian colleagues believe the barefoot ceremony is a more appropriate manner to acknowledge Indigenous customs.

"I just think it is positive thing that we’ll have one consistent act across the competition to not only recognise first nation’s people but to reinforce our commitment against racism in this country and around the world," national vice-captain and Sydney Thunder skipper Rachael Haynes said.

"It was really important for leaders of all teams – and all also the playing cohort – that we were doing something that was symbolic and sensitive to the situation. I’m really pleased we’ll do this.

"I think the great thing about it is it’s another learning opportunity, to understand why we’re recognising the piece of land we’re playing on and the people it belongs to. I feel really positive about it and I’m glad the competition is united in its approach."

Players will wear the Walkabout Wickets emblem, designed by Aunty Fiona Clarke, on their team strip. The league will also celebrate Indigenous culture during NAIDOC week next month.

Darlington, 18, spoke to her teammates this week about her heritage.

"It’s a common practice for the Indigenous [cricket] girls to have a yarning circle, and to chat about their cultures," Darlington said.

"Coming into a team where not everyone might be aware of Indigenous culture is really nice. It would be very special if anything I’ve said had a powerful impact."

Meanwhile, Australia's superstar Ellyse Perry will make her return to top flight cricket after almost eight months out of the game.

There had been doubts if the all-rounder would be able to bowl upon her return from a serious hamstring injury but Perry has been cleared to showcase her skills with bat and ball against crosstown rival the Thunder. 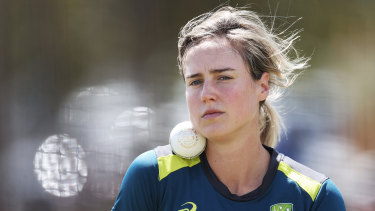 Ellyse Perry makes her return from injury for the Sydney Sixers on Sunday.Credit:Getty Images

Perry has not played an official game since tearing her hamstring off the bone in Australia's final group match of the Twenty20 World Cup in March.

She had been aiming to return at international level during the white-ball series against New Zealand but suffered a minor injury to another part of the muscle.

"She’s good to go. She’s been bowling and batting unrestricted at training, I don’t see any reason why she is not going to play," Sixers coach Ben Sawyer, who is also part of the national women's team's set up, said.

"She has worked amazingly hard in her rehab to get to this point and she should be applauded for the effort that she has made to not only return but to also work on aspects of her game to make her even better and I am excited to see that out on the park this tournament."

This season's WBBL is being played entirely out of Sydney due to the coronavirus pandemic. Cricket Australia has set up a hub in Sydney Olympic Park to house players, coaches and support staff for the duration of the 59-game tournament.

The WBBL this season features 21 internationals, all of whom undertook 14 days of quarantine to take part in the biggest Twenty20 league in the women's game.

Brisbane Heat
Star spinner Jess Jonassen takes over as captain of the defending champions, who have a considerable hole to fill in the batting after Beth Mooney's move west to Perth.

Melbourne Renegades
Amy Satterthwaite's return is a huge boost for one of last season's semi-finalists while in Molly Strano, Sophie Molineux and Georgia Wareham they have one of the best spin combinations in the league.

Melbourne Stars
National captain Meg Lanning is back from the west as part of wholesale changes to a squad which finished bottom, while new coach Trent Woodhill is one of the sharpest thinkers in the Twenty20 format.

Perth Scorchers
Meg Lanning's move home has been offset by Beth Mooney's arrival from Brisbane while the signing of New Zealand all-rounder Sophie Devine and England leggie Sarah Glenn gives them scope to improve on a semi-final finish.

Sydney Sixers
The glamour team of the league with world-class pair Ellyse Perry and Alyssa Healy, and star in waiting Ash Gardner. Remarkably settled for a side which missed the finals for the first time but questions will be asked if they stumble again.

Sydney Thunder
The western Sydney club will be aiming for finals after signing all-rounder Sammy-Jo Johnson and English pair Heather Knight and Tammy Beaumont. Watch out for teen sensation Phoebe Litchfield ... after she finishes her exams.

Balotelli is close to a move to Vasco da Gama. He was offered 2.5 million euros a year
Van Dijk - best Central defender of 2020, Trent-right, Robertson-left (ESPN)
Massimiliano Allegri: Ronaldo is a top player in terms of mentality. He has a new goal every year
Borussia Dortmund presented a collection with Spongebob as part of a deal with Nickelodeon
Woodward on Manchester United and trophies: there is a lot of work Ahead to achieve the stability needed
Neuer - best goaltender in 2020, Alisson-2nd, Oblak-3rd (ESPN)
Liverpool are Interested in 21-year-old Leipzig defender Konate
Source https://www.theage.com.au/sport/cricket/wbbl-won-t-take-a-knee-but-will-instead-conduct-pre-game-indigenous-ceremonies-20201024-p56877.html?ref=rss&utm_medium=rss&utm_source=rss_feed