'We are not immune': Empathy call as cases rise in regional Victoria

A regional Victorian health service boss has called for calm and empathy in the community as coronavirus infections spread beyond Melbourne’s borders.

There were 27 active cases in rural local government areas not subject to the lockdown on Monday, compared with five this time last week. 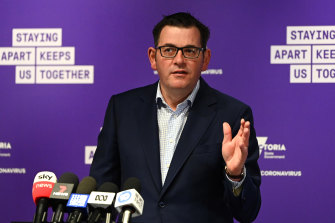 Premier Daniel Andrews is hopeful Victoria is past its second peak of coronavirus infections.Credit:Getty

This is the highest number of active cases in regional Victoria since the Department of Health and Human Services started publishing this information on May 7.

But there are no plans to extend the lockdown beyond Melbourne and the Mitchell Shire, which are subject to stage three restrictions.

Premier Daniel Andrews said any decision on whether to lock down the entire state would be based on the caseload and an assessment of the individual circumstances of each positive case.

He said controlled outbreaks may show spikes in infection rates “but it wouldn’t necessarily tell you the full picture”. 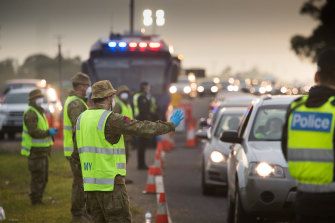 “The quicker you can find those people, lock them down, have them tested, that's how you can bring control to something that might look numerically significant,” he said.

Of the 27 active cases in regional Victoria, there are five in Greater Geelong, four in Greater Bendigo and three each in Baw Baw, Bass Coast and Greater Shepparton.

There are two in Moorabool, and one each in Campaspe, East Gippsland, Macedon Ranges, South Gippsland, Surf Coast, Swan Hill and Warrnambool.

Mitchell Shire, which is not part of metropolitan Melbourne but which is part of the lockdown because of its higher infection rate, currently has 12 active cases.

“This is not the time for people to blame others or throw vitriol at each other over social media or in public,” she said.

“This is not about people who come to visit or people who live here. Everyone is vulnerable and everyone needs to do the right thing.”

Ms Child said there were no COVID-19 patients at its health sites at Wonthaggi Hospital or on Phillip Island and no staff had tested positive.

She said no Bass Coast Health staff had tested positive.

“However, just as we predicted several days ago, there is a likelihood that our region will have positive cases now and into the future – we are not immune to community transmission.”

The West Gippsland Hospital is also testing staff after one employee returned a positive test.

This week the Australian Medical Association’s Victorian branch called for testing sites to be set up at checkpoints bordering Melbourne to protect regional parts of the state.

“Bureaucrats must ensure the vital service transport workers provide is kept front of mind when making decisions around the border crossing and transport infrastructure,” he said.

Of the 1612 active cases in Victoria on Monday, 1549 were in locked-down parts of the state (Greater Melbourne and Mitchell shire), 27 were in rural or regional Victoria and the location information for the rest was not yet known.

Craig Butt joined The Age in 2011 and specialises in data-driven journalism.

The trained bear was brought to the dressing room of the Sakhalin Resident
De Ligt had shoulder surgery and will miss 3 months
Modibo – infected with coronavirus Barcelona player. The disease passes without symptoms
Lichtsteiner finished his career. The former Juve and Arsenal defender is 36 years old
Matuidi left Juventus. The midfielder will move to Inter Miami Beckham
Goetze turned down Beckham's Inter. Mario wants to play in Europe
Tonali will move to Inter after the end of the Europa League
Source https://www.theage.com.au/national/victoria/we-are-not-immune-empathy-call-as-cases-rise-in-regional-victoria-20200713-p55bl8.html?ref=rss&utm_medium=rss&utm_source=rss_national