We tried to lean in. It left some of us medicated and depressed

Shortly after Sheryl Sandberg released her battle-cry of a book, Lean In, nine years ago – in which she urged women to lean in to their careers, rather than out – I was too tired to do what I felt like doing, which was to start tearing stuff apart with my bare hands.

Instead,I spat my uncensored feelings out all over the place in a moment when using my inside voice would have been advisable. 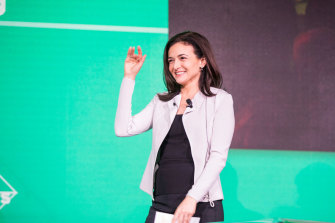 Sheryl Sandberg released her viral book Lean In nine years ago in which she urged women to lean in to their careers, rather than outCredit:Getty Images

“I guess I should talk about how much support I’ve been given here, how amazing so many of you have been,” I said, standing in the middle of the newsroom while holding a slice of cake on a paper plate, at my maternity leave send-off. “But let’s face it,” I added with a nervous chuckle. “I’m over it.” By “it”, I meant the struggle to keep building my career, which, at too many points, led me to hastily and half-heartedly pat one of my sick kids into bed, while inside I stressed about finishing my latest article.

Fearful as I was that yet another maternity leave would kill, once and for all, any gusto I had for my career, this wasn’t exactly the picture of journalistic ambition I had long aspired to give off.

And now that Sandberg has announced that she’s quit her job as the number two at Facebook (now Meta), I have a few thoughts about the pressure she heaped on women to create a “better world”.

For one thing, it helped leave some of us depressed and medicated.

At the time of Sandberg’s book’s launch, I’d been “leaning in” to work while trying to raise my children for seven years – picture one of those clown heads at a circus side show, swivelling left and right and missing the balls being thrown at it at every turn, but with a soundtrack of howling babies. Rather than “underestimate [my] own abilities”, as Sandberg cautioned, I kept my foot “on the gas pedal”.

And I had a lot more help than many. It’s not just that I’m white and middle class, with the privileges that come with those realities. I was also born tightly wound and raised by a dad with only intermittent work and a mum who never had the luxury of having a job she actually liked. This gave me a lifelong fear of failure and a burning desire for meaningful work.

So, when I was experiencing the abdominal cramps that I knew would soon lead to a miscarriage early in a pregnancy many years ago, I carried on with that day’s assignment with a smile.

This is the price you just had to pay, I’d say to myself, for your kids to know that women’s careers are just as important as men’s careers.

When my kids would tell me, with downcast eyes, that I’d forgotten to attend another school event, I’d feel my heart in my throat, but also, secretly, the internal glow of queasy righteousness. This is the price you had to pay, I’d say to myself – backed by Sandberg’s lauded “movement” – for your kids to know that women’s careers matter as much as men’s.

Sometimes, this righteousness turned to anger – sometimes directed at my children – as I struggled with my fear about the loss of career, the meaning and status it provided, and my guilt over how often I turned my kids away.

They’re the sort of gut-punch experiences that have driven a lot of women I know to feel depressed.

Recently, a friend’s six-year-old declared that when she becomes a mother, “I’ll pay attention to my kids”. “That really hurt,” says my friend, who is writing a book after many years of rejection. “I fantasise about a life where I can just drink wine and watch cat videos, which is probably exactly what I was doing before I went on this Sheryl Sandberg-esque journey.”

Another woman I know quit her much-cherished job as a designer not long after she lashed out at one of her kids.

“I smacked her out of complete frustration,” she says of the incident, which happened in the car in the chaotic morning rush. “I hit her hard. I hit her with intention. I’ve never forgotten it.”

Now, she’s on antidepressant medication. “I should have gone on it way sooner,” she says. “We’re [expected to be] superhuman and we don’t need help, we can do it all ... [and] be like the Sheryl Sandbergs of the world.”

They’re moments that are driving more women to lean out – and find greater happiness in doing so.

“They’re having these conversations with themselves; what would be their biggest regrets on their deathbed?” says Kirsty Levin, creator of The Parents Village. “That they haven’t hit that C-level on their career, or that they don’t have a great relationship with their family?”

“They’re having these conversations with themselves; what would be their biggest regrets on their deathbed? That they haven’t hit that C-level on their career, or that they don’t have a great relationship with their family?”

Leaning out won’t be the answer for all women – and it’s an unimaginable luxury for many – but leaning in is a goal with flawed assumptions: that women gaining power and wealth is the only factor needed for a “better world”, and that professional productivity is the ultimate sign of success. (Sandberg might be a billionaire, but she’s also become known as the Typhoid Mary of surveillance capitalism for her role in helping Facebook profit from monitoring its users.)

My designer friend who has leaned out is not only calmer than ever and present for her children, but on her way to reinvigorating her career in a more joyous, and sane, form. “For the first time in 10 years, I actually can breathe,” she says.

Today, after I file this, I’ll be switching off early to hug two of my children who are home with the flu, instead of pitching the next piece.

I love my career and find more meaning in it than I ever have. But I’ve been inspired by a different manifesto.

A life of meaning is not synonymous with living an achievement-oriented existence focused on “usefulness”, wrote Viktor Frankl, the Holocaust survivor and psychiatrist who wrote the 1946 book, Man’s Search For Meaning. Rather, it is love that is “the ultimate and the highest goal to which man can aspire... The salvation of man is through love and in love.”

As for Sandberg? She’s announced she’s moving into philanthropy.

Make the most of your health, relationships, fitness and nutrition with our Live Well newsletter. Get it in your inbox every Monday.