The first AFL preliminary final at Perth's 60,000-seat Optus Stadium shapes as an epic contest between West Coast and Melbourne but the fight for a ticket to the 1.20pm match has already begun for Eagles fans.

Members from both clubs can buy tickets from 9am until 1pm, (11am for In The Wings/Eagles Nest/Rising Stars members) and 2pm for the general public.

The AFL allocates finals tickets evenly among clubs and any remaining from Melbourne's quota would be reallocated to West Coast to on sell mid-week. 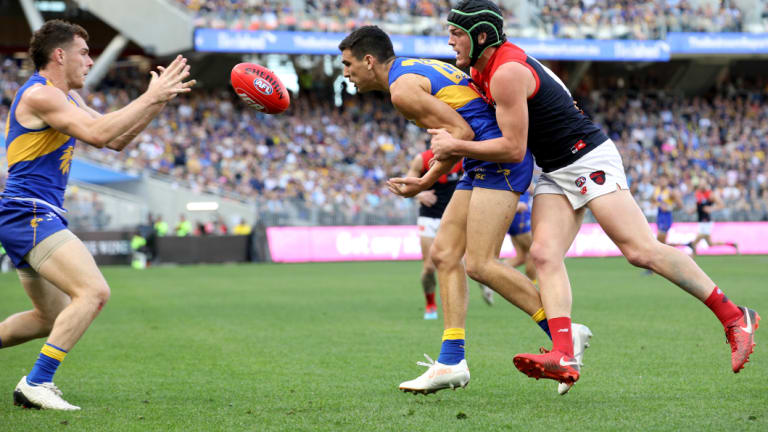 Melbourne were too good for West Coast just four weeks ago at Optus Stadium.

The club has urged the blue and gold army to rally behind the players at the free session when they hit the track for the 60-minute session.

Fans will be in full voice come bouncedown on Saturday afternoon at the $1.8 billion venue, where West Coast has a 10-3 record in 2018.

Melbourne has won its past two games in Perth against the Eagles, including the round 22 upset that kickstarted their impressive four-match winning streak into the finals.

The Demons have since beaten traditional September heavyweights Geelong in week one and Hawthorn last Friday to earn a realistic shot at breaking the club's 54-year AFL premiership drought, with Saturday's victor to face either Richmond or Collingwood in the grand final.

About 5000 Melbourne fans are tipped to travel to Perth for the clash, their club's first preliminary final appearance in 18 years.

The Australian Hotels Association predicted the influx of interstate supporters would generate $5 million for the WA economy.

The unusual start time for an AFL match in WA would likely encourage footy fans travelling to Perth to stay for at least two nights.

Demons fans face airfare fees between $1400 and $2000 to fly to Perth, about the same price West Coast supporters are being quoted to fly to Melbourne for the AFL grand final on Saturday week.

The lowest-priced ticket to Saturday's penultimate AFL playoff is $65.

Those attending the free Eagles session on Monday should gather outside gate D from 9am at Optus Stadium (Swan River end of stadium precinct near Matagarup Bridge). No public transport is available to the precinct on weekdays, with limited parking on site and nearby.

Zinedine Zidane: People always talk about Real Madrid, because This is the most important club in history
Lukas Podolski: Sane hasn't reached the top level yet. He needs to play for the national team, win the Euro or the world Cup
Police arrested a 12-year-old boy in the case of threats against Zaa
These people are sick. They need help. The fear and loathing of the North London Derby
Farfan's goal could not be counted: before that, the referee called from the goal, and CHorluka just took the ball and ran forward with it
Son has scored 10+ goals for Tottenham in the Premier League four seasons in a row
Milan are Interested in the striker of Lille Osimana
Source https://www.theage.com.au/national/western-australia/west-coast-v-melbourne-fight-for-finals-tickets-begins-for-fans-20180917-p5047e.html?ref=rss&utm_medium=rss&utm_source=rss_national

From the Archives, 1997: Search for answers after hospital's deadly demolition

Bask in the big blue views from this family abode

Take pole position at the Bathurst 1000 with iconic home

CBD Melbourne: Back at you boss, magistrate says

Back at you boss, Clisdell says

Why are fish wars heating up all over the world?

Why are so many women reluctant to have their picture taken?

Get the egg nog, Christmas has come early - in Pascoe Vale, at least

Have we lost confidence in Daniel Andrews to get it right?

Yes, it's a weird season, but it seems the fans don't care

How you can be one of Australia’s top TV reviewers

This exception to the rule makes no sense

Tigers down Swans in second lowest-scoring game of AFL era

Rebecca felt hopeless before she joined a class action

WWII 'warbirds' get $1.1b Brisbane parallel runway off to flying start

'We are prisoners': Fenced exercise yards at lockdown tower slammed