Queensland wants New South Wales to record 28 days of zero community transmission cases, where authorities are unable to link the new case to a known source, before it will consider reopening the border dividing the states.

Community transmission figures for NSW remained largely stable in the two months before Queensland announced in June it would reopen its borders on July 10. 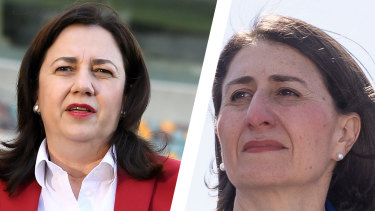 NSW says it may never reach the threshold set by Queensland to reopen its borders, with Premier Gladys Berejiklian warning that 28 days of no community transmission is not feasible.Credit:Getty Images, Brook Mitchell

NSW was on track to reach the target on October 6, but with a new case last week and authorities unable to make a quick, definitive link to a known infection, the border clock was reset to zero.

Queensland Chief Health Officer Jeannette Young said cases must be linked to another infection within 48 hours or she would treat them as community transmission.

The last time Queensland opened its borders to all of NSW was on July 10, after making the announcement on June 30.

The trigger for a border opening with NSW will be reached on October 22 if no mystery cases of COVID-19 are found before then.

Data from NSW Health revealed the tally of community transmission cases on May 1 was 362.

While the tally only increased by two mystery cases across the two months before the border decision was made, the total fluctuated each day as health authorities linked suspicious diagnoses to known cases or clusters.

On June 30, the day Queensland announced it would reopen the border, there had been 364 mystery cases since the start of the pandemic.

But all of NSW was declared a hotspot on August 8, when the total amount of unlinked cases rose to 379, and the border was slammed shut again.

The data shows the total number of community-transmitted infections in NSW on August 1 was 375, compared with September 30, when the total was 393, an increase of 18 mystery cases over the two-month period.

Byron Shire Council deputy mayor Michael Lyon questioned whether Queensland Health did not trust NSW Health's tracing and that was the reason for the reluctancy to fully reopen the border.

"While NSW may be satisfied that previous case was linked to a known cluster, I can see Queensland's point of view, their health experts may have a diff point of view because they might not be so confident," he said.

"But if Queensland Health is not in doubt about NSW Health's contact tracing being accurate, then they are being unreasonable.

"I don't think this is an automatic case of 'shifting the goalposts', Queensland Health might just be using a different methodology.

"So we might argue this current situation is a benefit for us, certainly in terms of our visitation."

There has been debate between health experts about whether hotspot declarations should be cancelled after 14 days or 28 days.

University of Queensland virologist Ian Mackay told Brisbane Times last month there would be little risk to the community if Queensland decided to lower the benchmark from 28 days to 14.

He said while some people might still have COVID-19 after 14 days, it was unlikely they would be infectious and the risk of spreading it was small.

"I think we've learned now that that 14 days is probably enough time to cover most people leaving the infectious phase," he said.

But Dr Young said Queensland would stick with the 28-day rule.

"Well, 28 days was what we discussed at a national level as being the safest amount of time to allow," she said.

Koeman is the fifth coach to manage 6 teams in the Champions League
Messi is playing his 17th season in the Champions League for Barcelona. This is a club record
Pirlo is the 3rd coach in the history of Juve to win a debut away match in the Champions League, after Capello and Lippi
Georginho Wijnaldum: Pickford went for an idiotic tackle. In matches with Everton, this often happens
Cech is included in Chelsea's Premier League bid. He ended his career as a player in the summer of 2019
Chiellini is in 3rd place for Juventus in the Champions League. Only Buffon and Del Piero played more
Eric ten hag: Liverpool is the best team in the world. But the game with Aston Villa showed that they are not perfect
Source https://www.smh.com.au/politics/queensland/what-community-transmission-was-like-last-time-queensland-opened-up-to-nsw-20201001-p5613p.html?ref=rss&utm_medium=rss&utm_source=rss_feed