Early in All Our Shimmering Skies, seven-year-old Molly Hook is reading tombstones with her mother, Violet, in the cemetery the family owns on the outskirts of Darwin. The year is 1934 and the person doing much of the grave digging is plucky Molly with the shovel she calls Bert.

Violet is going away, she tells Molly. "Promise me you'll make your life grand and beautiful and poetic and where it's not poetic you'll write it so," Violet says. 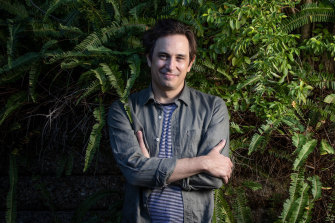 Later we meet World War II Zero pilot Yukio Miki, struggling with grief and his commitment to the Japanese war effort. His father, a maker of famous knives, taught him "… the wonders and importance of story. The finest blades are forged not with steel, son … but with story."

Many fine novelists worry away at the same themes, a tongue drawn to a loose tooth. We've seen Trent Dalton's preoccupation with the power of words and stories to transform damaged children before, in his debut novel, Boy Swallows Universe. We've also seen the powerlessness of childhood, a visceral thing in his hands. The thing that makes his work so remarkable, though, is his seamless and plausible blending of reality and the mystical.

Magic, or at least the possibility of it, is again important in All Our Shimmering Skies, but not as literary technique added on a whim. Dalton's fantastical elements are a logical psychological progression for Molly. As in his earlier work, childhood trauma becomes the architect of a different kind of reality. And Molly's trauma is especially gruesome, though the novel never feels manipulative or overly sentimental. 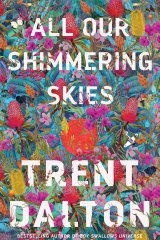 The story becomes more compelling as it progresses. By the time Molly is 12, Australia is at war and most of Darwin is evacuated, though not Molly or her family. Without her mother for protection, Molly is horrifically abused by her father and sadistic uncle Aubrey. One scene in the graveyard is particularly chilling. Then the Japanese bombers come.

For Molly, imagination is a survival tool and her fancies have their own rationale. Her family haven't always been diggers of graves — for generations they've been driven by a lust for gold and have shown voracious carelessness in the way they destroyed the land to find it. Molly believes that an Indigenous "sorcerer", Longcoat Bob, cursed her grandfather long ago for stealing gold. This curse is the reason for the cruelty and debasement of her father and uncle — the hearts of all Molly's kin are destined to turn to stone.

Guided by poetic clues etched on the back of her grandfather's prospecting pan and the advice of writers such as Emily Dickinson and Shakespeare, she heads off to find Longcoat Bob and have the curse lifted, but she's not alone. Greta, the beautiful actress girlfriend of Uncle Aubrey who's suffered one too many of his beatings, goes with her.

Molly's mother told her the sky is her best friend and Molly finds many examples to confirm this. The sky saves her life. It talks to her and sends her gifts, including Yukio, when he parachutes from his doomed plane almost at her feet.

Dalton's Northern Territory is a magnificent wild Eden and there's splendour in his smallest descriptions. In time All Our Shimmering Skies becomes a mythic quest as Molly is driven to find Longcoat Bob before her own heart turns to stone and she loses the ability to care for anyone. She leads Greta and Yukio into the wilds of northern Australia, with danger ahead and in pursuit.

The similarities between Dalton's two novels are too explicit to be ignored but they don't diminish his achievement here. It's unfair to compare any novel to Boy Swallows Universe, which has sold more than 500,000 copies in Australia alone and was longlisted for the Miles Franklin literary award. I adored it, but it wasn't perfect.

Neither is All Our Shimmering Skies. It's unnecessarily repetitive and baggy and could easily lose 80 pages. There's too much symbolism and metaphor and Yukio's fortuitous knowledge of exactly the right English words strains credibility more than the fantastical events.

It's also a work of shimmering originality and energy, with extraordinary characters and a clever, thrilling plot. On paper, Uplifting Australian Gritty Fantasy Gothic seems an unlikely mix, yet somehow it works brilliantly. Dalton's novels are companion pieces exploring how traumatised children cope and evolve under the most dreadful of circumstances, while also being cracking good reads. I found All Our Shimmering Skies unputdownable.

When explaining how an actor cries on cue, Greta tells Molly to shut her eyes and imagine "that dark and scary and fragile place where you've been before … you go there enough times you realise that dark place is actually your sacred place". At the same time there is magic all around us, the novel says, if only we lift our gaze to the skies and look.

Toni Jordan's most recent novel, The Fragments, is published by Text.

La Liga President on Messi's departure: It won't be a drama for us. And his reputation will suffer
Ronaldo is a fan of the UFC. Rooting for Khabib, training with Conor, signed up for all the top fighters
Only Milan have not lost points this season in the top 5 of the European leagues. Aston Villa lost 0:3 in the
🎮 We made a game about Khabib - fight for him and try to fill up Geiji
Tebas about klasiko: the Game of the best teams in the world. The most important match of club football
Leeds forward Bamford scored a hat-trick. He has 6 goals in 6 Premier League games
Moyes on the spectators in the stadiums: People watch matches in cinemas, why can't they do it on the street?
Source https://www.theage.com.au/culture/books/what-trent-dalton-did-after-swallowing-the-universe-20200924-p55yuu.html?ref=rss&utm_medium=rss&utm_source=rss_culture

'Quite an active day': Strong winds and thunderstorm warnings for Sydney

‘I Didn’t Freak You Out, Did I?’ Oklahoma Police Pull Drivers Over to Give Out Cinnamon Rolls

Manhunt after man stabbed in the back

‘IT’S GOING AWAY’: US shatters coronavirus record in a single day

Where the US election will be decided

The travel photographer who follows colours over fashion trends