Where the doughnuts are good for you

Comeco Foods in Newtown might be the most inclusive cafe in Sydney: its food is entirely vegan and gluten-free. Anyone used to dodging their way around a menu because they have a shellfish allergy, are a coeliac diner or can’t eat meat will feel incredibly welcome here. And even if you face no dietary roadblocks, you should head to Comeco Foods anyway, because this Japanese cafe is worth a visit (or three). 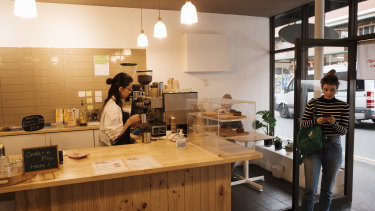 Great care goes into its signature sourdough doughnuts: the staff grinds organic brown rice and mixes it with other ingredients, leaving the dough to ferment for two to three days before frying the doughnuts to order in rice bran oil.

Enjoy them topped with raspberry custard, the caffeinated punch of coffee and cocoa, sprinkled with cinnamon sugar or filled with spiced apples. There’s an Asian influence, too: the sourdough doughnuts are available with the green tea complexity of matcha custard, a sweet adzuki bean paste or a savoury filling of Japanese curry.

These snackable pastries may have a crowd-pleasing quality, but they’re inspired by one individual: a boy who can’t eat conventional doughnuts due to severe gluten, egg, nut, seed and dairy allergies. Co-owner Yu Ozone wanted to create something he could enjoy without any risk of him going into anaphylactic shock, so she spent a long time developing these treats. 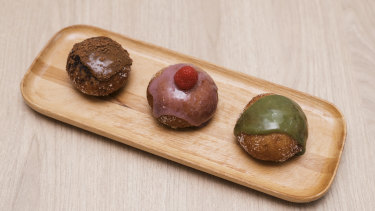 Steering clear of baking staples (such as egg, dairy and wheat) while trying to make something delicious is a real feat, and she’s pulled it off at Comeco Foods. Not only that, but Ozone also grinds the flour in-house, so she can confirm there’s no risk of allergens contaminating her food.

There’s not a single trace of gluten, egg or peanuts in Comeco Foods’ kitchen either, with separate dishes and washing sponges used for anything involving the cafe's nut products. This conscientious approach is why Ozone ensures her kitchen is open. “We would like to customers to see what ingredients we use,” she says. “If there is any concern, we would like to be asked.”

Ozone also practices what she preaches — she had to cut dairy, egg and gluten from her diet after these allergens left her constantly ill — so she knows what it’s like having to forensically scour the entire ingredient list of a dish. It’s what led to her starting Comeco Foods in 2017: she wanted to create vegan and gluten-free food that other people could enjoy, too, including her husband, Masa Haga. The business has existed in market-stall and pop-up form previously, but it opened as a permanent eatery down Newtown’s south end in May.

This cute cafe serves doughnuts through the week, and vegan sushi on the weekend. So if you’re there on a Saturday or Sunday, you might see staff blowtorching serves of the excellent barbecue sushi roll, which is wrapped in charred inari (tofu) and flavoured with eggplant miso.

Or perhaps you’ll see them topping lotus chips and curry mayonnaise on the sukiyaki roll, or raining chilli flakes on the shiitake mushroom tempura sushi coated in chilli mayonnaise. 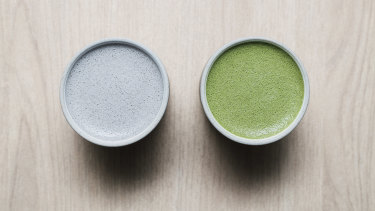 The black sesame and matcha lattes at Comeco Foods in Newtown. Credit:James Brickwood

And like any good cafe, you can ask for coffee here. But try the black sesame latte prepared with tahini, organic maple syrup and soy milk. It’s more proof that Comeco Foods can offer something that’s vegan and gluten-free, and it doesn’t feel lesser — just full-flavoured and delicious.

Main attraction: Doughnuts and sushi that anyone can enjoy — the sugar-dusted doughnuts and flavour-packed sushi rolls are all vegan and gluten-free.

Must-try dish: The mocha coffee custard doughnut and, if they’re available, the barbecue sushi roll, which is blowtorched to order.

Insta-worthy dish: Raspberry custard doughnut with its bright-pink coating and berry on top – or the elaborate curry sukiyaki sushi roll.

Drinks: From $4 for single-origin coffee, but consider trying the black sesame and matcha lattes, given Comeco Foods’ Japanese focus.

Prices: From $5 for a sweet potato brownie to $18 for frozen vegan karaage (in take-home form).

Open: Tue-Fri midday to 5pm (doughnuts only); Sat-Sunday 10am to 2pm (for doughnuts and vegan sushi).

Thomas Tuchel: If both legs were intact, you could have seen my 40-meter sprint
PSG saved Tuchel's pet: Choupo-moting got everyone for free, managed not to score from a centimetre, and now pulled Paris to the semi-finals of the Champions League
Gian Piero Gasperini: The worst part is that we were so close. I can only thank the guys
Neymar was the player of the match Atalanta-PSG. He gave an assist
ПС PSG suffered through the entire quarter-final and turned it over in 149 seconds. Lifted the Italian curse and went so far in the Champions League for the first time in 25 years
ПС PSG's pain was transformed into happiness: in three minutes, the suffering stars turned into celebrating kings
The club from Italy won't win the Champions League for the 10th year in a row. This is an anti-record
Source https://www.smh.com.au/lifestyle/health-and-wellness/where-the-doughnuts-are-good-for-you-20200709-p55ai9.html?ref=rss&utm_medium=rss&utm_source=rss_feed

It's not just Andrews, everyone is running for cover

'Dude, where's my pay rise?': Wage figures not quite what they seem

Super-spreaders could be key to controlling COVID-19

The Kid Laroi, the pride of Waterloo, takes on the world

NBA round-up: Clippers lock up No.2 seed with win

Sollykeeper: Billionaire Lew gives retailers a lesson on how to win during COVID

Pay freeze for MPs with 234,800 Queenslanders out of work

McGregor's sacking the right decision... about a year too late

Stage four lockdown offers a chance to find our path out

Football For Fires charity match cancelled due to COVID-19

Waterhouse focuses on the Up And Coming instead of trials

Queensland man charged with defrauding $10 million from his employer

The alarming statistics showing the Waratahs can't back up big wins

Starc adds muscle in effort to get speed gun up

NRL star stood down after walk out

Jolted into the 21st century, AMP faces its cultural awakening

Horse at centre of viral text wins like Winx

Bring your own poetry to this saga of familial love

Complaints to state's corruption watchdog to be kept secret before elections

Binna Burra to reopen for visitors one year after fire devastation

Goodman defies pandemic with $1b profit as e-commerce demand builds

Victory will rise after 2020 debacle

'It's hard not to be excited': Berry's spring stars return

Cats weighing up whether Dangerfield can follow the Lethal model

Doedee out for season in another Crows blow

'I wasn't comfortable with it': McGregor's last straw at the Dragons

'We hope our inspiration is infectious': Moulin Rouge set for 2021

From the Archives, 1980: Political murder in a quiet Sydney street

‘I wasn’t dealing with it’: Sacked Mary breathes fire at Dragons over selection fiasco

Jacinda’s 'be kind' message passed by some people entirely

Crash through or crash trying: The strategy behind rugby's power play

Socceroos grounded for 2020 as next year fills up fast

One million people out of work for first time: ABS

Man of Contradictions: Joko book a warning to Australia about a pragmatic president

No sex, please. I may be a vampire but this is Twilight

Glamour and destruction live side by side in Beirut. But has it finally reached breaking point?

'Danger on the doorstep': No sign of Queensland border opening any time soon

Victorian council elections likely to be postponed amid COVID-19 risks

Racing.com a blueprint for other sports, says Seven boss

Massive rebuild on horizon for Victory after dispiriting season