Avril Haines’ journey to the top of the national security world reads more like a movie script than the path of a woman about to make history as America’s first female spy chief. 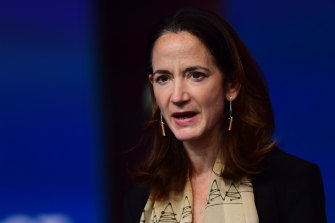 But it was Haines' work for the Obama administration — where she helped oversee a controversial drone strike program — that solidified her professional reputation, firstly as the deputy director of the CIA and later as Obama’s deputy national security adviser.

“She’s a fierce advocate for telling the truth,” Biden said as he announced her appointment.

“If she gets word of a threat coming to our shores, like another pandemic or foreign interference in our elections, she will not stop raising alarms until the right people take action. People will be able to take her word because she always calls it as she sees it.”

If Haines is confirmed by Congress, she will become the first woman to lead America’s intelligence community — a coalition of 17 organisations ranging from the National Security Agency to the FBI and the State Department. 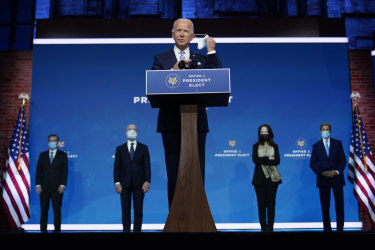 It’s the kind of shift that many believe is sorely needed in the aftermath of Donald Trump, whose critics say spent the past four years undermining national security, politicising key intelligence roles and ignoring the expert advice of his own agencies.

Note, for example, last year’s firing of inspector-general Michael Atkinson, the public watchdog who informed Congress of a whistleblower’s complaint that Trump had abused his office by trying to pressure Ukraine to open an investigation into the Biden family.

Or the appointment of loyalists who could do the President’s bidding: acting director Richard Grenell, who declassified documents to amplify Trump’s “Obamagate” theories; and the current Director of National Intelligence, John Ratcliffe, who released unverified information involving Hillary Clinton and squeezed Democrats out of intelligence briefings.

And then, of course, there was the 2018 Helsinki summit, when Trump stood on the world stage and said he believed Vladimir Putin’s claims that there had been no Russian interference in the 2016 election — despite the contrasting views of his own security agencies.

“President Putin says it's not Russia,” Trump declared after the pair held face-to-face talks. “I don't see any reason why it would be.” 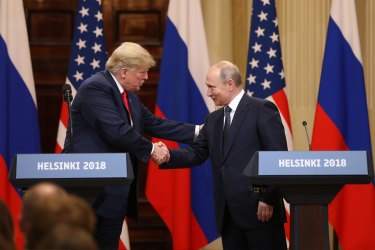 US President Donald Trump shakes hands with Vladimir Putin, Russia's President, during a news conference in Helsinki, Finland, in 2018.Credit:Bloomberg

Haines’ appointment, like the rest of Biden’s cabinet picks this week (many nominations draw on personnel from the Obama era, when Biden was vice-president) marks the start of a vastly different approach to Trump's national security and foreign policy.

Her job will be to keep America safe, advising the President on everything from cyber attacks to terrorism, pandemic threats and the ever-shifting geopolitical landscape.

But while her nomination is likely to be approved by the Senate, she has already encountered resistance. Some have raised concerns about her support for Gina Haspel — the first female director of the CIA — whose nomination by Trump in 2018 became controversial after it emerged she had been a proponent of torture techniques such as waterboarding.

Others are alarmed by her role in the Obama administration’s controversial drone program — a CIA policy that centred around targeted killings of terrorists but also resulted in the deaths of civilians. 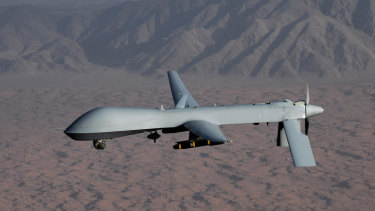 Haines helped set up the legal framework for the strikes and was often required to weigh in on whether suspected terrorists could be lawfully killed under the program.

“Avril Haines as Director of National Intelligence is not good,” tweeted Sarah Lazare, a web editor for the progressive monthly magazine, In These Times. “She was one of the authors of Obama's 'Presidential policy guidance', the infamous drone playbook that made targeted killings all over the world a normal part of US policy.”

Supporters, however, say Haines’ history is testament to her character as an unapologetic “truth teller”, a pragmatist instead of an ideologue, and someone prepared to make some tough calls — even if they're contentious or unpopular.

In 2015, for instance, after CIA personnel were found to have hacked the computers of Senate staffers who were writing a Senate Intelligence Committee report on CIA torture, it was up to Haines to work out whether they ought to be disciplined. She opted against it, overruling the CIA Inspector-General.

Those who know the 51-year-old lawyer expect more polarising decisions in her new, groundbreaking role.

As she told Biden at this week’s press conference: “I have never shied away from speaking truth to power and that will be my charge as Director of National Intelligence.

“I've worked for you for a long time and I accept this nomination knowing that you would never want me to do otherwise… even when what I have to say may be inconvenient or difficult. And I assure you, there will be those times.”

Understand the election result and its aftermath with expert analysis from US correspondent Matthew Knott. Sign up to The Sydney Morning Herald's newsletter here, The Age's here, Brisbane Times' here and WAtoday's here.

The judge was wrong. It can't be that in the moment with De Gea there is no foul, but with the 2nd goal of Manchester United-there is. Maguire about 1:2 with Sheffield
Juventus are Interested in Auar
Ex-CSKA forward Denis Popov has been appointed head coach of SKA Rostov
Solskjaer after 1-2 with Sheffield: Manchester United have no time to feel sorry for themselves. Saturday's match with Arsenal
Brother Chalova moved to the Serbian Subotica
Barcelona will not sign Garcia in the winter due to financial problems
Rodgers on the draw with Everton: It was unlucky that Leicester did not score the second goal
Source https://www.theage.com.au/world/north-america/who-is-avril-haines-joe-biden-s-new-spy-chief-20201127-p56ig3.html?ref=rss&utm_medium=rss&utm_source=rss_feed

Pedestrians run for cover as car races through central Melbourne