Like a marriage on the rocks, Benji Marshall and the Wests Tigers put on a brave face for the sake of the kids, or in this case, the fans.

While the Marshall-Tigers break-up may have appeared amicable, beneath the surface the relationship has sadly deteriorated to the point where Marshall will be nursing more than just a knee injury over the summer as he searches for a new club. 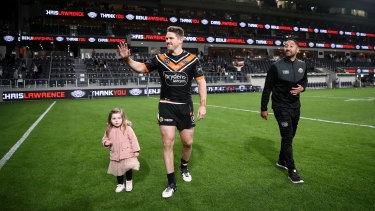 Benji Marshall takes a farewell lap with Chris Lawrence and his daughter.Credit:Getty

The Tigers legend is so hurt by the club's decision not to re-sign him, and the fact he read it in the Herald first, that he rejected an invitation for his family to join him on the field after his final game on Saturday night.

In fact, Marshall decided against bringing his wife Zoe and son Fox to the game at all. He walk around for his lap of honour on his own despite the retiring Chris Lawrence being accompanied by his daughter Emme and wife Kathryn.

This was despite the fact that the Tigers managed to get an exemption from the NRL to allow Lawrence and Marshall to have their children and partners on the field at full-time. Lawrence took up the offer, but Marshall declined despite his wife and child attending and posing for photos at his 250th game for the Tigers six weeks ago before he was told his contract wouldn't be renewed.

The Tigers have tried to farewell Marshall in style, but the five-eighth didn't want any fanfare made about his last game for the club. He is adamant he will continue his career elsewhere, but at this stage it appears more likely we may have seen Marshall in the NRL for the last time.

The knee injury was a sad end to Marshall's second-coming at the Wests Tigers, but his teammates say the sadness set in the moment he found out he wasn't wanted. He has since shown his disappointment with an unwillingness to help the club facilitate a farewell befitting the champion playmaker.

He will always be remembered for his time at the Wests Tigers, but his legacy extends beyond the 2005 grand final triumph.

His true legacy is the impact he has had on a generation of footballers who grew up dreaming of being Benji Marshall, many of whom are now creating their own paths in the NRL. 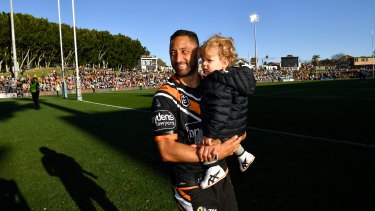 Benji Marshall with son Fox at Leichhardt Oval for his 250th game.Credit:NRL Photos

Panthers five-eighth Jarome Luai is a prime example. "Benji was my guy. He was my go to," Luai said. "The first game of footy I watched was the '05 grand final. I still remember it. We were camping away with the family, and the guys next to us brought a TV with them. They were Tigers fans and it rubbed off on me. It's my first ever memory of rugby league.

"Benji's been my guy ever since. Whenever I play against Benji, I'm star struck. Even with Shaun Johnson, too. Those two guys will always be idols to me. I've seen a photo 'work until your idols become your rivals'. Those two are definitely that for me."

Brown in the mix for Eels

The Parramatta Eels are planning on naming Dylan Brown in their side for Saturday night's qualifying final against the Melbourne Storm at Suncorp Stadium.

Brown underwent surgery on a syndesmosis injury he suffered in the round 16 loss to South Sydney and is touch-and-go to return in time for the Storm clash. 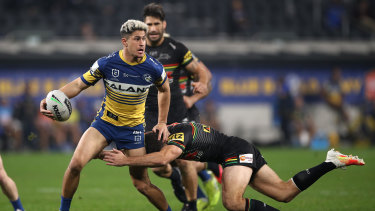 Dylan Brown is a chance to return in the first week of the finals.Credit:Getty

Coach Brad Arthur hopes to name the five-eighth on Tuesday, however a training session earlier that day will determine whether the young Kiwi is any chance of lining up against Cameron Munster and the Storm.

"We'll give him every chance to play and see how he goes on Tuesday at training before we name the team that afternoon," Arthur said.

"He's going well but we won't put him at risk. If he's right to go we'll play him, but if not we won't hesitate to wait until the next game we play."

What would the finals series look like if Sydney Roosters supremo Nick Politis got his way when he suggested that competition points from the first two rounds should be wiped clear when the NRL season returned from the COVID break?

Politis questioned the integrity of the competition, with many dismissing the Roosters chairman's claims as sour grapes given his side side was sitting towards the bottom of the ladder with back-to-back losses to open the season.

THE POLITIS LADDER VS NRL LADDER

Donaghy not tripped up

There's plenty of conjecture about the future of the Melbourne Storm as their coach, captain and chief executive all ponder their next move with the Brisbane Broncos circling the trio.

There have been suggestions doing the rounds that Storm chairman Matt Tripp has sidelined CEO Dave Donaghy from the club's negotiations to retain Craig Bellamy due to a perceived conflict of interest, but that's not the case.

Tripp had taken on responsibility for negotiations with Bellamy before the Broncos head-hunted the chief executive for the role set to be vacated by the departure of Paul White. 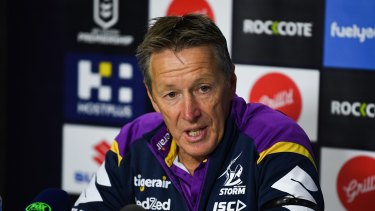 Craig Bellamy fires up after the loss to the Dragons on Sunday.Credit:NRL Photos

Donaghy won't be involved in Storm negotiations with Bellamy, who has reportedly been offered a five-year, $5 million deal to be coaching director at the Broncos from 2022.

Bellamy has signalled that next year will be his final year as a head coach, but he's previously indicated that the end was near only to extend his tenure. The Storm will be hoping that is the case once again, but the fact Bellamy's family reside in the Sunshine state could prove hard to ignore at this point in his life.

Brugge forward Dennis on goal for Zenit: I said that I only score grandees, but it was a joke
PSG defender Kimpembe Pro 1:2 with Manchester United: We can only blame ourselves
Lopetegui Pro 0:0 with Chelsea: Sevilla showed a good team game
Rashford on victory over PSG: Manchester United now have a strong position in the group
Nagelsmann victory over Istanbul: Not fully satisfied with the game Leipzig was fatigue, not the most effective pressure
Goalkeeper Brugge Croat about 2:1 with Zenit: We proved that we should not be considered outsiders of the group
Manchester United won again in Paris with a late Rashford goal. An unexpected hero - a 22-year-old reservist who has not been on the field since December 2019
Source https://www.theage.com.au/sport/nrl/why-benji-marshall-didn-t-want-his-family-with-him-at-his-last-tigers-game-20200926-p55zkv.html?ref=rss&utm_medium=rss&utm_source=rss_feed

'Sad waste': Even Jacki Weaver and Jack Thompson can't save this film