State, territory, federal and New Zealand food ministers are expected to be closely split when they meet on Friday to weigh up the label recommended by Food Standards Australia and New Zealand. It has black, white and red text stating "PREGNANCY WARNING: Alcohol can cause lifelong harm to your baby". 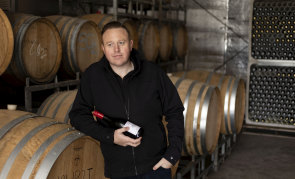 Mr Carpenter, who has been using the voluntary DrinkWise label since 2017, rejected the argument that the new label would too costly for manufacturers to roll out because it requires them to use red ink, a call made by Alcohol Beverages Australia and echoed by federal food minister Richard Colbeck.

"I don't see a particular issue with that," he said.

"Wine is a vintage product - we print our labels yearly, so there isn't an issue in terms of updating that label [with the new pregnancy warning]."

The director of the Lark Hill Winery in Bungendore, NSW decided to speak out about the issue because he believes winemakers have a "social responsibility" to help reach the tens of thousands of Australian women who continue to drink after finding out they are pregnant.

The Australian Institute of Health and Welfare's Drug and Alcohol Survey 2019, which canvassed the habits of 22,274 people, found that while fewer women were drinking while pregnant than three years earlier, about one-third of the 300,000 women who give birth each year continued to do so.

Western Australian health minister Roger Cook, who strongly supports the recommended label along with New Zealand, the ACT and the Northern Territory, said "effective mandatory labelling to increase awareness of the dangers of alcohol during pregnancy" was "long overdue".

"It is time to put the safety, health and well-being of our babies and our future generations first," Mr Cook said.

Sources have told The Age and Sydney Morning Herald that NSW, South Australia and the Commonwealth are expected to vote in favour of the industry peak body's request for the requirement to use red ink on the label to be removed, and that Queensland will abstain from the vote, with Victoria and Tasmania undecided.

Alcohol Beverages Australia chief executive Andrew Wilsmore has said mandating red ink would cost manufacturers $400 million, but FSANZ found this to be an overestimate and the cost would be outweighed by savings through reducing the rate of babies born with fetal alcohol spectrum disorder.

Epidemiologist and former Australian of the Year Fiona Stanley called on the ministers to support the FSANZ label, saying allowing alcohol to be sold without it would be like "selling thalidomide without a warning of the risk of birth defects."

Professor Stanley said resistance to the label on cost grounds was "immoral" given the heavy social and economic costs of children born with fetal alcohol spectrum disorders, which FSANZ estimated hit $27.6 billion over 20 years in health costs alone.

"We remain resolute that this new labelling must contain the colour red," Mr Slevin said.

"It is the colour that is consistently rated as conveying a warning message to the community, and it will stand out more clearly."

Spain, Germany and France have two clubs in the 1/4 final of the Champions League, England and Italy have one each
In the last three meetings of Barca and Bayern in the playoffs, the future winner of the Champions League passes on
Chelsea conceded 7 goals for the first time in two matches of the play-off series in European competitions
Buffon-Pirlo: Now I have to call you mister!? Good Luck, Andrea
Insigne is the first Italian to score for real at the Bernabeu and Barca at the camp Nou
All 11 Barca players touched the ball before Messi's goal against Napoli
Cakir cancelled out Messi's goal and awarded penalties to Barca and Napoli
Source https://www.theage.com.au/politics/federal/winemaker-backs-tough-new-pregnancy-warning-label-ahead-of-tight-vote-20200710-p55b1h.html?ref=rss&utm_medium=rss&utm_source=rss_feed