Winter in Melbourne is here and it has announced itself in a frosty way.

Only four days into the season and freezing temperatures, icy rain, snow flurries and destructive winds seem to have become the norm, reminding us of the true meaning behind ‘coat weather’.

Blustering blizzards and gale force winds of up to 100 km/h will lash through the state’s Alpine region on Sunday, the Bureau of Meteorology said. Snow will dust the mountaintops, including Mt Hotham, Falls Creek and Dinner Plain. 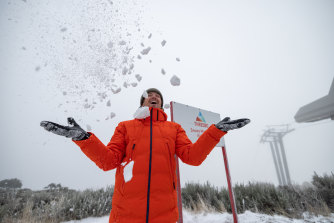 Blizzard warnings are in place for Victoria’s alpine region as the entire state braces for another cold front.Credit:Thredbo Media

This news may be welcomed by ski retreats, many of which began their winter season a week early this year, but the State Emergency Service warned that conditions such as these could prove extremely dangerous and advised residents to be extra alert while the warnings were in place.

“A deep low is expected to move west of Tasmania this evening and extend a vigorous cold front across western Victoria early on Sunday morning,” meteorologists wrote in a statement on Saturday morning.

Inner Melbourne experienced a low of eight degrees on Saturday, inching its way to only 16 degrees at its warmest point. Although not the coldest day on record so far this year, Thursday could see temperatures dip further to a high of only 11 degrees to equal record-low temperatures for 2022 that were recorded last week.

The bureau warned at the time that winds and sporadic icy showers would make the ‘feels like’ temperature plummet to around two or three degrees, thus explaining why Melburnians were already reaching for the thick socks and wool-lined jackets.

Areas like Dinner Plain fared even worse last week, reaching a high of minus 1.5 degrees and a low of minus 3.2 degrees.

Today, the bureau warned residents in Victoria’s southwest of extreme wind gusts of up to 90 km/h through the night on Saturday and into Sunday, urging people to remain indoors.

While icy showers and thunderstorms could leave most of the state scrambling to get indoors, Victoria’s northeastern ranges and elevated parts are at most risk of blizzards and strong winds.

“Winds are expected to gradually ease below warning thresholds during Sunday morning, however are likely to persist in Alpine areas throughout Sunday,” the bureau said.

The SES advised people to stay indoors and away from windows wherever possible. They urged residents to avoid driving and to watch out for floodwater, live electricity wires, debris, damaged roads and fallen trees.

Consistently wet, windy, wintry weather is forecast for Melbourne, the Gippsland districts and Wimmera region, with minimum temperatures remaining between a brisk six and eight degrees in the week to come for Melbourne.

Melbourne should expect rain on Sunday morning, accompanied by temperatures ranging between 10 and 13 degrees throughout the day. Monday will bring similar temperatures, though dipping slightly lower to eight degrees at its coldest point and also the chance of some hail – so keep your cars covered.

These warnings follow a litany of alerts issued by the bureau since the beginning of winter in Victoria. Senior bureau meteorologist Jonathan How said Melbourne was in the midst of an expected ten-day streak of temperatures below 14 degrees, the likes of which has not been reported since 1998.