Matthew Wolff, playing in only his second major, stole the show at an unforgiving Winged Foot with a scorching start and steady finish to grab an unlikely two-shot lead over big-hitting Bryson DeChambeau on Saturday.

Wolff, 21, began the day four shots behind overnight leader Patrick Reed but erased that deficit in seven holes en route to a five-under-par 65 that tied the low round of the week and brought him to five under overall. 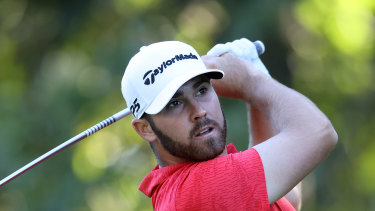 Matthew Wolff of the United States plays his shot from the 14th tee during the third round of the 120th U.S. Open Championship on September 19, 2020 at Winged Foot Golf Club in Mamaroneck, New York.Credit:Getty Images

"I like to go out there and do what I feel comfortable with, rip dog and see how it goes from there," said Wolff, who will look to become the first player to win the U.S. Open in his tournament debut since Francis Ouimet in 1913.

"I feel comfortable with every part of my game so I don't like to shy away from things when I'm feeling confident, and I'm probably going to do the same tomorrow."

The front nine at Winged Foot is one of the more daunting stretches in golf but a steadfast Wolff came out firing lasers at tricky pin positions and reached the turn with a blistering five-under 30 after five birdies.

Wolff, who hit just two of 14 fairways, made his lone bogey at the par-four 16th but responded in style with a birdie at the last after sticking his approach shot to 10 feet.

DeChambeau (70), who began the day one shot back of Reed, made a bogey-bogey start but leaned on his power to chase down Wolff and squandered a chance to finish within one shot of the lead when he two-putted from six-feet for a closing bogey.

Former British Open champion Louis Oosthuizen (68) was four shots back of Wolff while Hideki Matsuyama (70) and Xander Schauffele (70) were each a further shot adrift.

The leading Australia is Adam Scott at nine-over.

World number 10 Reed (77) drained a nine-foot birdie at the ninth to share the lead but fell apart over a nightmarish inward nine during which he made six bogeys and a double-bogey to fall into a share of 11th place, eight shots back of Wolff.

Sharonov joined the coaching staff of Cyprus Paphos
Yuran headed Khabarovsk SKA
Brugge forward Dennis on goal for Zenit: I said that I only score grandees, but it was a joke
PSG defender Kimpembe Pro 1:2 with Manchester United: We can only blame ourselves
Lopetegui Pro 0:0 with Chelsea: Sevilla showed a good team game
Rashford on victory over PSG: Manchester United now have a strong position in the group
Nagelsmann victory over Istanbul: Not fully satisfied with the game Leipzig was fatigue, not the most effective pressure
Source https://www.smh.com.au/sport/golf/wolff-steals-show-at-u-s-open-leads-dechambeau-by-two-20200920-p55xcb.html?ref=rss&utm_medium=rss&utm_source=rss_feed