At 19, Melbourne mother Tanisha Kandiah only just fits the description of Teen Mom Australia, the local version of MTV reality series Teen Mom (hence the spelling). Having grown up watching the original, Kandiah applied, unsuccessfully, for the debut season of Teen Mom Australia after her daughter, Bianca, was born. Now with Bianca an adorable toddler, Kandiah is the show’s newest cast member.

“I was having bad anxiety after Bianca was born so I wanted to normalise (the experience of teenage parenthood),” says Kandiah. “It’s such a taboo. Being a young mum, everyone expects you to have it all figured out and it’s not always like that. I wanted to make more awareness of that, and I wanted people to know that they are going be OK. It’s not the end just because you have a kid.” 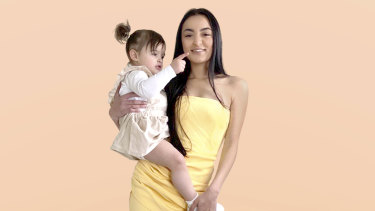 Family Planning Alliance Australia spokesperson Dr Deborah Bateson hopes the series will start conversations. According to her recent paper in the Australian Journal of General Practice, births in women and girls under the age of 20 in Australia have fallen from 18.4 per 1000 in 2008 to 9.5 per 1000 in 2018. Yet teenage pregnancy remains a global health issue that can lead to intergenerational cycles of poverty and ill health.

“It’s important that we respect and support the choices made by young women and that we validate the experience of teenage mothers,” Dr Bateson says. “The good thing is that (the series) shows some of the challenges — subsequent unplanned pregnancies, relationship issues, custody, returning to work, body image after pregnancy — the less glamorous side of things.

"That gives the community a chance to talk about those challenges. It’s about getting that balance right. Obviously, the people who make reality television are in the business of getting viewers.”

As with the three returning cast members, all aspects of Kandiah’s life are on display, including her troubled relationship with her mother, who was also a teenage parent.

“Teen Mom Australia is more of a documentary, whereas the American one is more for entertainment,” says Kandiah. “The Australian one is just girls doing their thing and trying to make it work.”

Bianca’s dad, 20-year-old Dante, took some convincing before he agreed to participate.

“Dante is a very private person," Kandiah said. "He did the show as a favour to me. We are a family whether we’re together or not. I think it’s good to get the dads’ side out and tell their stories, but I guess in society, (the responsibility) is put more on the mother.”

Kandiah sees her involvement in the series as more of an opportunity than a privacy risk. Her Instagram account is a modest collection of styled selfies. Her bio lists a talent management agency.

“I want Bianca to be able to look back when she’s older and see us trying to do the best that we can for her, and that it was hard sometimes, but we just want her to be happy … I’ve always had this mentality that what people say about you is none of your business, so I’m trusting my instincts and focusing on why I’m doing this, which is for my daughter.”

It’s a bold move for teenage parents to go public, says Dr Bateson, and one that should be respected.

“They’re reminding us that those experiences are unique to everyone. I would encourage people watching to think through some of the key things that are shown and chat about it with your friends.

"We know that teenage mothers can be vilified or subject to bullying on social media, and we have to be sensitive to those issues. We should celebrate people who’ve put themselves out there.”

Bridget McManus is a television writer and critic for Green Guide. She was deputy editor of Green Guide from 2006 to 2010 and now also writes features and interviews for Life & Style in The Saturday Age and M magazine in The Sunday Age.

Barcelona transferred a 5 million Euro bonus to Borussia for Dembele's transfer. Catalans have already paid more than 130 million
Ramos and Benzema out of Real Madrid's bid for the Champions League match with Inter
Griezmann on Messi: I admire Leo, and he knows it. We have a great relationship
Rooney on the possibility of a move to Barca in the 2010/11 season: Thinking about it. Could fit in perfectly
Hooray, in England they will let the audience into the stands again! While up to 4 thousand and not everywhere, but the clubs are happy 😊
Solskjaer about the match with Istanbul: these are the Champions of Turkey, it will be difficult
Gasperini on the nomination for the best coach of the year award: If we beat Liverpool, maybe I'll get a few votes
Source https://www.smh.com.au/culture/tv-and-radio/young-mums-tackling-the-teen-taboo-20201019-p566jd.html?ref=rss&utm_medium=rss&utm_source=rss_culture

Noosa Schoolies: A night in the life of police