Victorian Liberal leader Michael O'Brien says his party will end Labor's era of political dominance at the next election, a win he hopes will be fuelled by younger people whose livelihoods have been hurt by the lockdown's social and economic effects.

The Opposition Leader, speaking candidly to Liberal Party members at a private forum on Wednesday night, argued the party needed to better articulate its values to voters and use social media to drive engagement with the community. 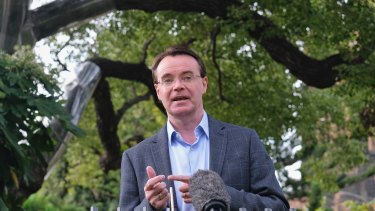 Liberal leader Michael O'Brien has been a loud critic of the Andrews government during the pandemic.Credit:Luis Ascui

"Clearly we've got work to do because, in Victoria at least, Labor has won too many elections and we haven't won enough.

"We are going to turn that around."

Mr O'Brien has come under public and internal pressure over his political tactics during the pandemic and there is intense speculation within the party he could face a leadership challenge next year, according to 12 Liberals including shadow ministers, former MPs and party officials. The party figures, some of whom are from Mr O'Brien's faction within the party, spoke on the condition of anonymity to discuss party affairs.

Public polling reported by The Age last month showed Labor in a dominating electoral position and Mr O'Brien with a 15 per cent approval rating despite Labor's hotel quarantine failure and the government losing several ministers this year. Mr O'Brien's approval rating is similar to other state opposition leaders who have struggled to shift attention from state premiers at a time of crisis, and opposition leaders have historically struggled to make inroads until closer to the time of an election when voters focus on the alternative government.

The Liberal leader's remarks about the November 2022 election come as an audit into branch stacking in the Liberal Party – which is close to being finalised – found evidence of people paying for other people's memberships, a common sign of branch stacking. Victoria's corruption watchdog is assessing allegations of misuse of taxpayer funds by federal minister Michael Sukkar, whose office was linked to branch stacking allegations central to a major audit of the Victorian branch.

Mr O'Brien was the keynote speaker in an online forum, virtually attended by hundreds of party supporters, to discuss potential reforms to the Victorian Liberals' party platform – a guiding principles document that has not been updated since 2002.

Speaking alongside party president Robert Clark, the state leader said gaining the support of young people whose livelihoods had suffered due to pandemic restrictions would be paramount to winning the next election, saying social media engagement on Liberal MPs' pages had been "huge".

About 500 new members have joined the Liberal Party in recent months and party officials attribute the above-average gains to anger directed at the Labor government during the protracted lockdown.

"There is an opportunity there for us to talk to a young cohort who previously have had very little interest in politics but value their freedoms and see the Labor government has been instrumental in taking them away," Mr O'Brien said, adding that MPs would increase their focus on social media as a communications tool.

"What we see now is a spark, and we need to make sure we turn that spark into a flame of interest."

Mr O'Brien said it was clear not enough Victorians understood Liberal values – which he said included smaller government, lower taxes and decentralisation – and partly blamed the media for perceptions of the party.

Dr Nick Economou, senior politics lecturer at Monash University, said the state Liberals had a difficult task holding the government to account when the public was focussed on the government driving down daily case numbers. He said the next election would be fought on the state's economic recovery, an area of strength of conservatives parties that espouse free enterprise.

"The good thing for [Mr O'Brien] is the next election isn't until 2022," Dr Economou said.

"If some of the darker economic predictions about the consequences of the lockdown turn out to be true, then Mr O'Brien, or whoever leads the party, won't have to worry about values, they'll simply say Labor presided over an economic disaster."

Roman Abramovich: Lampard's status at Chelsea remains unshakeable. He is an iconic figure for the club
Chelsea have sacked Lampard
Sergi Roberto can recover for the game with Athletic on January 31. He missed more than 2 months
Giggs on Bruno and Cantona: There are similarities, but Eric has 4 Premier League titles and a Cup. This is an indicator
Hertha legend Dardai will once again take over as head coach of the team
Tuchel will take charge of Chelsea
Okko Sport will show all the remaining matches of the Italian Cup this season
Source https://www.smh.com.au/national/victoria/youth-the-key-to-turn-around-of-coalition-fortunes-michael-o-brien-20201127-p56ifq.html?ref=rss&utm_medium=rss&utm_source=rss_national