Friday, 14 August 2020_The US government has for the first time seized vessels allegedly carrying Iran’s gasoline to Venezuela, the Wall Street Journal reports. 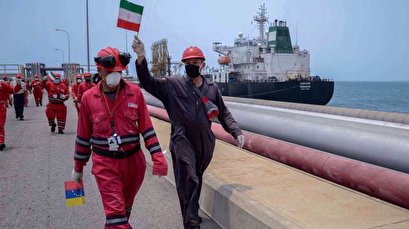 In the past, Iran managed to send five ships -- Fortune, Forest, Petunia, Faxon and Clavel -- carrying Iranian fuel to Venezuela in May and June to help revive oil refineries in the South American country, which is suffering from a severe fuel shortage caused by US sanctions.

Iran’s fuel shipments have drawn the ire of the US, which has imposed draconian sanctions on Iran and Venezuela with the aim of crippling their oil sectors.

Last month, US prosecutors lodged a lawsuit to seize the gasoline aboard four other tankers that Iran wants to ship to Venezuela, a move seen as the latest attempt by the administration of US President Donald Trump to further exert economic pressure on the two countries.

The lawsuit sought to stop the flow of revenues from oil sales to Iran, which was sanctioned by the US, the Wall Street Journal reported on Thursday, citing US officials.

The US seized the four vessels, called Luna, Pandi, Bering and Bella, on the high seas recently and they are now en route to Houston, the WSJ added.

It also noted that top administration officials are likely to meet the tankers at an event planned to mark the docking.

According to one official, no military force was used to seize the vessels.

The United States had threatened stiff sanctions against foreign governments, shipping firms, seaports, and insurers if they aid the Iranian tankers.

In a letter to United Nations Secretary General Antonio Guterres in May, Iran's Foreign Minister Mohammad Javad Zarif issued a stern warning against the US' provocative acts through dispatching its naval forces to the Caribbean Sea with the goal of disrupting the course of Iranian tankers carrying fuel for Venezuela.

Zarif described "the illegal, dangerous and provocative US threats [against the Iranian tankers]" as a form of piracy and a big threat to international peace and security.

Meanwhile, Iranian ambassador to Venezuela Hojat Soltani has dismissed the report as another "lie" and “psychological warfare” by the United States.

He tweeted that “neither the vessels are Iranian, nor their owners or flags are related to Iran.”

Akhmat will sign Russian midfielder Montpellier Aduev
Juventus are set to sign Chiesa. To do this, the club wants to part with Khedira, Bernardeschi and Douglas Costa
Mido: I'm waiting for Koeman's reaction to Messi's words. He insisted on my departure when I spoke about Ajax
Suarez took number 9 at Atletico. It belonged to Morata
Moyes will manage West ham from home against Wolverhampton
Morata on Ronaldo: we all know what kind of player he is. He is happy that I am at Juventus
Ole Gunnar Solskjaer: Making players happy is not my job. I have to let out those who will achieve results
Source https://www.yjc.ir/en/news/47437/us-seizes-iranian-fuel-cargoes-for-first-time-wsj