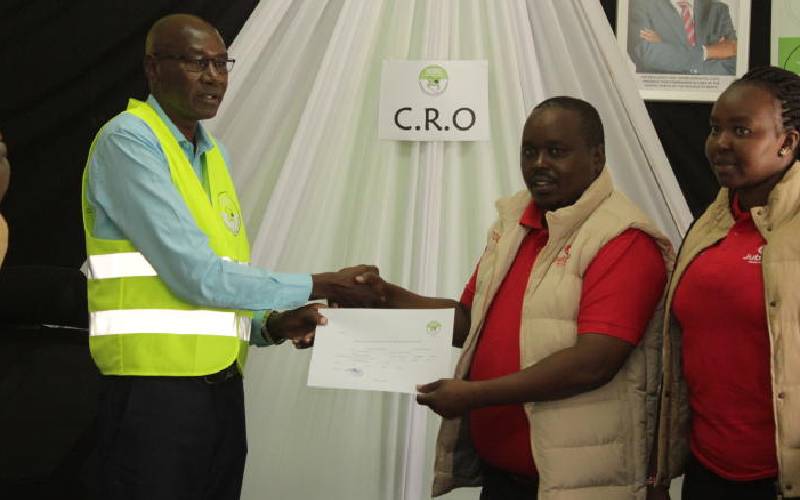 The Independent Electoral and Boundaries Commission(IEBC) has cleared Elgeyo Marakwet governor Alex Tolgos to vie for the senator seat.

Tolgos who appeared before the officers of IEBC early Sunday morning was cleared and handed over the certificate after he presented his documents.

Tolgos, who is exiting the governor seat after serving two terms, will battle for the Senate seat on a Jubilee ticket under Azimio Alliance with the incumbent Onesmus Kipchumba Murkomen of UDA.

Murkomen who is one of Deputy President William Ruto loyalists is seeking to defend his senatorial seat for the third time.

Addressing the press outside the IEBC offices in Iten, Tolgos said he is ready to face his high School rival, Murkomen, for the seat.

He said during his tenure as governor, there was a disconnect between his office as the implementer and the Senate office whose mandate is to oversight and champion for more resources to counties.

“Vying for the Senate seat was not an easy decision, many have been asking why I want to be elected as the senator, it is clear, my record speaks louder,” said Tolgos.

Murkomen was cleared by the UDA party unopposed after his competitors withdrew from the primaries.

In 2017, he retained the seat through Jubilee ticket, garnering over 97 percent.

Chepsaigut becomes the first woman to vie for Keiyo North, which is currently held by Dr James Murgor who lost in the UDA primaries.

She said her leadership is for equality and development including clean piped water to every homestead, good roads and better education for all.

"Women are equally qualified for the seat. I want to bring the face of a woman and servanthood," she said.

She will battle it out with Adams Kipsanai of UDA if cleared by IEBC during the August General Election.

The candidates who included former Saboti MP Wafula Lazaro and businessman Allan Chesang contesting senator seat urged for the disqualification of any candidate found instigating violence to advance his or her political interest.

"We have committed ourselves to peaceful campaigns and those found fanning violence should be punished," said Ole Ndiema after being cleared by IEBC.

Speaking outside Kitale Museum, the candidates promised to conduct violence free campaigns and asked the electoral agency to ensure free and fair elections.

"We are going to play our part to ensure peaceful campaigns, and we expected IEBC to ensure the elections no rigging," said Ole Ndiema.

They urged the agency to ensure a conducive environment for the election. ​