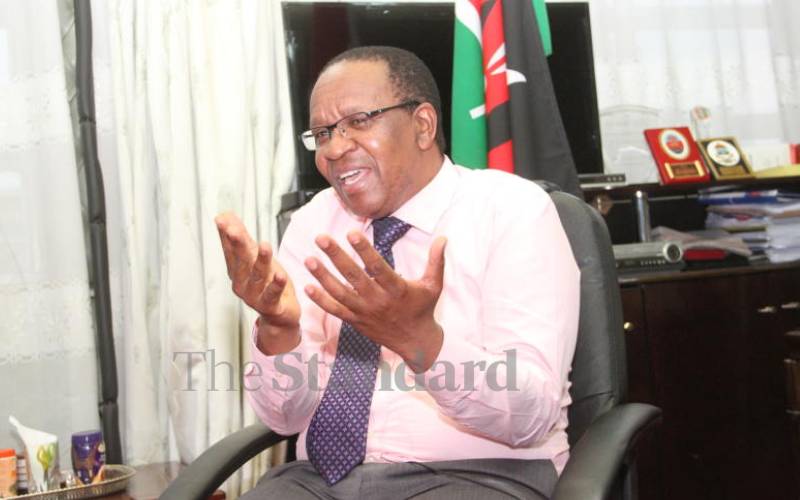 The party yesterday wrote to the Intelligence Service Complaint Board, protesting what it calls abuse of intelligence reports by Dr Kibicho.

Through its lawyers, the party decried the utterances attributed to the PS on the eve of Madaraka Day, where the PS reportedly claimed that reports by NIS showed the Azimio candidate would secure a first-round win in the August 9 elections with 60 per cent of the vote.

“Particularly, it is the duty of the Director-General of NIS to put in place mechanisms and systems to ‘prevent disclosure of classified information’ thus ensuring that no circumstances arise where such information is deployed outside constitutional and statutory frameworks as well as established guidelines and protocols,” says lawyer Elias Mutuma in the letter dated June 7.

“…the complainant is aggrieved by reckless and negligent release of NIS reports or polling information for use by the PS Interior to advance the interests and cause of the Azimio Party and to undermine the confidence of Kenyans in the fairness of the presidential electoral process.”

The party is calling for investigation by the board to find if Dr Kibicho’s utterances were based on official NIS reports, and whether the NIS Director General authorised the report.

UDA also wants to know what remedial measures have been taken. “Unless the Board or the Office of the Director-General of NIS provides a reasoned and acceptable finding or explanation to the complaint herein within 14 days of this letter, the complainant shall pursue further legal action to safeguard a peaceful electoral process that now stands compromised by the unlawful, unconstitutional and reckless use of intelligence information by the Principal Secretary for Interior to further the interests of a political party.”

The development comes just days after UDA’s secretary-general wrote to the Director of Public Prosecutions to prosecute State officials, including Cabinet Secretaries and Principal Secretaries, it claims are engaging in politics.

“It is a matter of public notoriety that five Cabinet Secretaries and one Principal Secretary are actively engaged in planning and execution of campaigns for the Azimio La Umoja presidential candidate. We have several documented cases of partisan political activities and we are ready to furnish your office with the details,” said Veronica Maina.

She said the involvement of State officials in campaigns raises doubt about their objectivity and neutrality.

She SG dismissed the argument by the officials that they are at liberty to support any candidate, saying Article 38 of the Constitution cannot be applied in a manner that it negates Chapter Six on leadership and integrity, and that a free and fair electoral process requires a neutral bureaucracy.

“The continued participation of Cabinet Secretaries and Principal Secretaries in the political activities of Azimio Coalition is hence brazenly contrary to Section 16 of the Public Officers and Ethics Act, 2003, as read with Section 23 of the Leadership and Integrity Act, 2012,” she said.

The party pointed out that the Election Offences Act demands that a public officer who engages in politics is fined Sh1 million or jailed for three years.