The launches on February 26 and March 4 did not demonstrate ICBM range but were likely meant to evaluate the new system before conducting a test at full range in the future, potentially disguised as a space launch, according to a statement from Pentagon spokesman John Kirby.

North Korea had not given many details about the tests, other than to say they were in preparation for the launch of a military spy satellite. 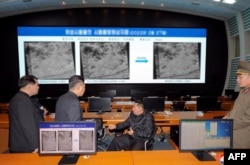 Kim announced plans to 'build a number of new elements in the launching ground so as to launch the military reconnaissance satellite and other multipurpose satellites by diverse carrier rockets in the future,' said a report by the Korean Central News Agency.

A day earlier, Kim said the spy satellite would provide 'real-time information' on the movements of 'the aggression troops of the U.S. imperialism and its vassal forces' in the region. None of the reports said when such a launch would occur.

North Korea had not conducted an ICBM launch since 2017, during the height of tensions between Kim and former U.S. President Donald Trump. A year earlier, North Korea had attempted to launch a satellite. The United States and its allies view North Korean satellite launches as thinly disguised tests of long-range missile technology banned by U.N. Security Council resolutions.

A satellite launch would dramatically raise tensions on the Korean Peninsula. On Thursday, conservative former prosecutor Yoon Suk-yeol was declared the winner of South Korea's presidential election. Yoon has promised a much more forceful approach to North Korea.