Yoon, a conservative, is expected to take a hardline approach toward North Korea and China.

'The alliance between the United States and the Republic of Korea, our economies and our people, is ironclad,' a State Department spokesperson told VOA, adding that President Joe Biden 'looks forward to working with the new administration to further expand our close cooperation.'

Yoon is expected to form a transition team before taking office in May, replacing outgoing President Moon Jae-in, who is constitutionally barred from running for a second five-year term.

While U.S. officials declined to forecast future Washington-Seoul ties, a large degree of continuity can be expected.

On foreign policy, Yoon is seen as an advocate for a policy of 'peace through strength' with North Korea and is more vocally critical of Beijing.

A South Korean Confucian scholar exits after casting his vote in the presidential election at a local polling station in Nonsan, South Korea, March 9, 2022.

Experts say he will have to manage both North Korea's expanding military capabilities and the intensifying U.S.-China rivalry.

During a recent webinar, Kathy Moon, the SK-Korea Foundation chair of Korea Studies at the Brookings Institution, said that Yoon appeared to desire 'to side more with the United States and take a harder line toward China. That includes military cooperation with the United States that would really ruffle China's feathers.'

Moon said the U.S. should use caution in its engagement with Yoon 'at least for the next year or so' because he is known to be an 'absolute novice' in the foreign policy arena. 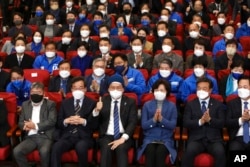 Members of the Democratic Party of Korea react as they watch a television report on an exit poll of the new president at the party's situation auditorium in the National assembly, in Seoul, South Korea, March 9, 2022.

Scott Snyder, a senior fellow for Korea studies at the Council on Foreign Relations, said the importance of the U.S.-South Korea alliance is not up for debate, given its high level of support among the South Korean public and the current U.S. foreign policy.

'At present, one would not think that (the U.S.-South Korea alliance) is necessarily a big issue, especially with the Biden administration focusing on reinforcing alliance cooperation,' said Snyder.

State Department officials have said that the U.S. shares a goal of complete denuclearization of the Korean Peninsula, and that its ironclad commitment to the defense of South Korea remains unchanged. The U.S. will continue its coordination with allies, including South Korea and Japan, to stay constantly ready to engage in serious and sustained diplomacy with North Korea.