The two sides focused on cooperation in defense and counterterrorism between their two militaries, saying this would contribute to “regional and global peace”.

It is yet to be seen how this bilateral cooperation will promote peaceful resolution of conflicts.

Russia has already threatened global peace by invading Ukraine, while Myanmar’s military has shattered the peace in Southeast Asia by staging a coup and bloody crackdown on civilians. Moscow is supplying weapons including jet fighters that Myanmar’s junta is using to bomb armed resistance and civilian targets. It has also trained more than 7,000 Myanmar military officers since 2000. 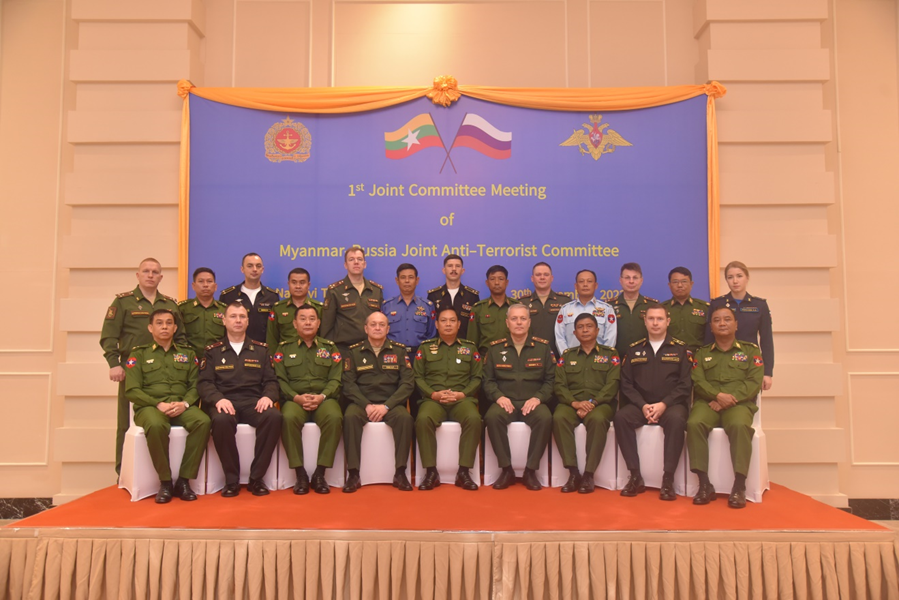 Members of the Myanmar-Russia Anti-Terrorist Committee pose for a group photo.

A day after being hosted by Min Aung Hlaing, the Russians took part in the first meeting of the Myanmar-Russia Anti-Terrorist Committee, jointly chaired by Colonel-General Rostislavovich and Myanmar’s Lieutenant-General Moe Myint Tun. The junta did not reveal what was discussed at the meeting.

But with the military regime labeling the parallel National Unity Government, its parliamentary body, and its People’s Defense Force (PDF) armed wing as terrorists, the meeting signals further help from Russia to crush the popular revolt in Myanmar.

According to a recent panel discussion by military sympathizers aired on Myawaddy TV, a military mouthpiece, Russia will soon provide counterterrorism training, expert advice, and modern weapons and technologies to crush the PDFs.

Shunned by the world, the Myanmar and Russian regimes are enjoying an unprecedented level of friendship as they cement comprehensive ties ranging from business and education to nuclear technology and tourism.

On Nov. 19, Min Aung Hlaing conferred honorary titles on the Russian defense minister, his deputy, and a technical expert.

In the second week of November, a Russian trade delegation from Fund RC-Investments, an investment platform of the Roscongress Foundation, sent by Putin on a special mission to promote commercial ties with Myanmar, met junta boss Min Aung Hlaing and his ministers in Naypyitaw. Meanwhile a delegation of rectors from Russian universities arrived in Naypyitaw last week to explore potential for cooperation in the education sector.