DO NOT PUBLISH UNTIL TOM SAYS SO

The Canadian airline crew held in sometimes-frightening conditions in the Dominican Republic after reporting contraband hidden on their plane finally made it back to Canada Thursday, ending a bizarre, seven-month ordeal in the Caribbean nation.

The group was greeted at Toronto’s Pearson airport by family members they last saw in person in April, as the crew set off on a trip that was supposed to last barely 24 hours.

The two pilots, two flight attendants and mechanic with tiny Pivot Airlines were freed to leave the Dominican Republic after prosecutors there announced two weeks ago they had insufficient evidence to charge the group.

Their seven passengers have also been cleared to exit the country.

Meanwhile, Pivot CEO Eric Edmondson urged the federal government Thursday to launch an investigation of aviation in the Dominican Republic, saying commercial airliners are being used routinely to smuggle drugs out of the island.

A million Canadian vacationers a year travelled to the country before the pandemic.

“Narco-trafficking is directly tied to tourism,” Edmondson charged. “The airplanes that fly the tourists in are flying narcotics out.”

The Canadians’ troubles began as they were about to take off from the resort town of Punta Cana on April 5, the flight chartered by an Alberta company that said it was entertaining potential investors and their guests. A different crew had flown the passengers there several days earlier.

When mechanic BK Dubey discovered a sports bag inside the “avionics bay” — a compartment accessed from the outside of the CRJ-100 jet — the airline notified the RCMP and local police. Dominican authorities eventually found eight bags inside the area reserved for wiring and computer equipment, announcing the luggage contained 210 kilograms of cocaine.

And then the Canadians who had reported the stash were arrested and sent to jail. 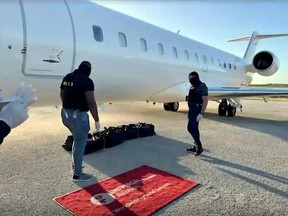 Video released by the Dominican Republic authorities shows law enforcement officers going through what is allegedly the cocaine seized on a Canadian chartered airliner in April. The Canadian flight crew were detained for months despite video evidence showing they were not involved. Photo by DNCD

For nine days they were kept in cramped cells, the men saying they were harassed and threatened daily by accused drug traffickers who demanded the foreigners transfer money to them or face violent retribution.

The group was eventually freed on bail, though prosecutors had argued they should be kept locked up for 12 months as the case was investigated, and later appealed the decision releasing them.

Their passports confiscated, the Canadians were ordered to stay in the Dominican Republic. They did, but faced death threats outside prison and lived under armed guard for much of the time, according to Pivot.

Finally on Nov. 11, prosecutors belonging to the Public Ministry announced they were ending their case against the Canadians — “acting responsibly, since the investigation had not obtained sufficient evidence to substantiate the accusation.”

Edmondson said he hopes that Transport Canada will look into aviation in the Dominican Republic and its role in narcotics trafficking.

Police there have often accused airport workers of helping run drugs, like in an alleged attempt last December to smuggle 47 kilograms of cocaine on a flight to Toronto. In a striking parallel to the Pivot incident, U.S. customs officers discovered cocaine hidden in the avionics bay of a plane that landed in Philadelphia from Santo Domingo, D.R., in August.

“I hope that the Dominican Republic takes what we bring to light seriously, and more so that Transport Canada takes it very seriously,” said Edmondson.

Prosecutors had alleged at the bail hearing, without offering evidence, that the Pivot flight was itself an elaborate front for drug trafficking.

But as Pivot hired a private security firm to investigate the hiding of the contraband, the Canadians say police never interviewed them, let alone laid charges.

Meanwhile, the airline obtained airport security video in August that it says shows an unrelated third-party stashing bags in the plane’s avionics bay in the middle of the night, while the crew were in their hotel. Dominican authorities have had the footage since April.

Prime Minister Justin Trudeau raised the Canadians’ plight with Dominican President Luis Abinader earlier this year, as did Foreign Affairs Minister Melanie Joly with her counterpart. In response to a question from Conservative Sen. David Wells last month, Transport Minister Omar Alghabra warned that the Dominican Republic risked sending a message to the world that it’s unsafe for commercial air crews to fly there.

The Airline Pilots Association, North America’s largest pilots union, and unions representing the other Pivot employees, had issued advisories warning airline crews flying into the country to beware of such perils.

Pivot’s plane — which previously flew Air Canada Express flights under contract — was its main source of revenue, said Edmondson. Having it stuck in the Caribbean for seven months has had “more than a major impact.”

But Pivot’s owner, private equity firm Binder Capital of Calgary, has kept the airline afloat and ensured no employees had to be let go, he said. The jet was ordered released by a Dominican judge and Pivot expects to have it back in Canada shortly, said the CEO.

Finalists announced for Golden Horseshoe Athlete of the Year

Liberal MP tops all others with $21.9K spending on ‘protocol gifts.’ Here’s what he spent it on

Four things Budget 2023 made clear, and the questions it provoked

What we know and don’t know about the Chinese balloon

Letters: Amira Elghawaby ‘is not embattled’

After State of the Union speech, Biden heads to key 2024 campaign states

Uganda says it will not renew term of U.N. human rights office

In The News for Feb. 8: Will the premiers say yes to the feds’ health care offer?

US forces returning to Philippines to counter China threats

Mill closures threaten to punch holes in the fabric of rural B.C. towns

Black Canadian justice strategy still in the works, as advocates call for reform

Bear with us — Parks Canada is updating its booking system, but some campers aren't happy

Russia’s war on Ukraine latest: Zelenskiy due in London on rare trip abroad

LeBron rewrites playbook on athlete activism on way to the top

Death toll from Syria-Turkey quake rises to more than 8,700

The ‘Chosen One’ fulfills destiny as James claims scoring record

IEA: Asia set to use half of world’s electricity by 2025

Uganda says it will not renew mandate of U.N. human rights office

Four takeaways from Biden’s State of the Union speech

Arkansas takes care of business on road, cruises past Kentucky

United Airlines flight turns around after fire in cabin

Vernon, B.C. RCMP searching for woman missing over a month

Woman, 69, dies after being hit by SUV in crosswalk on northeast Calgary street

Biden highlights economy, spars with Republicans in State of the Union speech

Investors’ reactions to Biden’s State of the Union speech