A man from the Saddle Lake Cree Nation, east of Edmonton, made the discovery of a lifetime while working on a project in his yard.

Jarrod Cardinal was digging a hole for a project in his yard — until his shovel struck a hard object roughly six feet in the ground. 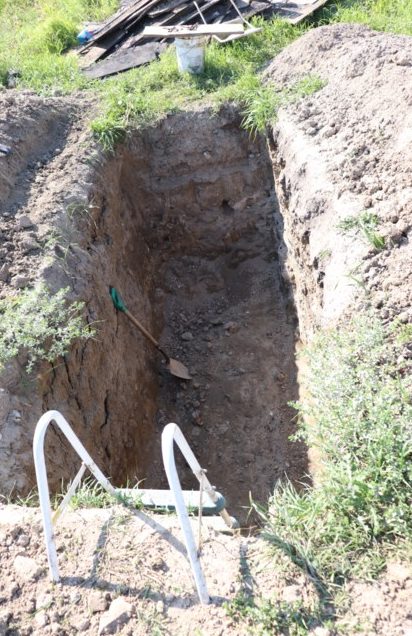 Jarrod Cardinal was digging a hole when he found a mammoth tusk on the Saddle Lake Cree Nation, Alta. in September 2022. Supplied

“I didn’t really know what is was at first,” Jarrod Cardinal said, not thinking much of it. “It was getting dark — I took it out of the dirt and threw it to the side.”

He didn’t get a closer look until the next day.

“I thought it was wood at first. I was just puzzled by it. I didn’t know what it was, I thought maybe this is a tusk or something,” Cardinal said.

“We’re like, ‘What is a tusk doing here?'” said Cardinal’s sister Carol Buffalo, who was there when he found the object.

A mammoth tusk was found by Jarrod Cardinal on the Saddle Lake Cree Nation, Alta. in September 2022. Courtesy: LakelandTODAY.ca via Global News

Pictures of the mystery find were sent to a paleontologist at the University of Alberta. Not only is it old — but it comes from an animal you only see or hear about in museums.

“An expert verified and they told us it was a mammoth tusk. He’s an expert in that field and right away he said it was authentic,” Cardinal said.

The vast majority of woolly mammoths have been extinct for about 11,000 years, since the end of the last ice age.

They were known to have roamed parts of Alberta, but finding part of one is something Cardinal said he would have never thought he’d come across.

“I was just blown away! I didn’t know what to think about it at first,” Cardinal said.

News of the fossil find had sparked a buzz of excitement for some on the Saddle Lake Cree Nation.

“Its popular now, everyone keeps walking up to him to asks to see it because we’ve never seen something like that —  it’s just in the museums you see it,” Buffalo said.

Cardinal stopped digging the area, not wanting to damage any other possible fossils in the ground.

He plans to hold on to the fossil for a now, but welcomes further expert examination of the tusk and the site where it was found.

If a homeowner or business thinks they have found a fossil while digging a basement or dugout, they’re advised to stop their work, take photos and record where the fossil was, and call or email the Royal Tyrrell Museum of Palaeontology in Drumheller.

Sacred Indigenous stone to be returned to original site in Alberta

From how to pronounce ‘Kyiv’ to Lisa LaFlamme, here’s what Canadians Googled in 2022

Police call not to search for women’s remains ‘a breach of human dignity,’ AFN hears

TRAIKOS: It turns out Leafs may have dodged a bullet in not landing a top-end goalie last summer

Pierre Poilievre: Addiction policy is broken. We must fix it

Opinion: Alberta’s Sovereignty Act is constitutional but it needs nuance

Alberta women’s shelters are under-resourced, leading people to be turned away: report

What the latest Bank of Canada rate hike means for inflation, consumers

Condemned Arizona killer pleas for the needle to give family ‘closure’

Putin calls nuclear weapons a tool of deterrence in Ukraine

Working one day a week in person might be the key to happier, more productive employees

Sharpton says film debuts at ‘critical point’ in US politics

Man, woman arrested after series of robberies in Mississauga: police