Nine years after losing three of her limbs to a life-threatening bout of sepsis, Ottawa’s Christine Caron is devoted to helping others cope with the often painful aftermath of the same condition.

Caron leads two support groups for people suffering from post-sepsis syndrome and another for those struggling to deal with their amputations.

Sepsis can be a life changing medical event and many survivors deal with post-traumatic stress, chronic pain, fatigue and reduced organ function.

“There are many people suffering with brain fog and pain from vascular damage after surviving sepsis,” said Caron, 58, a mother of four and a new grandmother.

“It’s strange to say, but I’m one of the lucky ones: I don’t have the same joint and vascular pain that a lot of these people have.”

Sepsis is a life-threatening condition resulting from the body’s runaway response to a serious infection. It can be triggered by a bacterial, fungal or viral infection, including COVID-19, and, if not identified and treated promptly, can led to septic shock, organ failure and death.

Caron’s life-and-death struggle with sepsis began in May 2013 after one of her four dogs, Buster, a three-year-old Shih Tzu, accidentally bit her left hand during a game of tug-of-war.

The bacteria commonly found in dog and cat saliva, Capnocytophaga, can infect people. In rare cases, it can lead to serious illness, including sepsis.

“It wasn’t a deep bite, just a break of the skin,” Caron remembered. “There was no redness around it, no pain.”

She washed and disinfected the wound, but some of her other dogs also licked her hand. 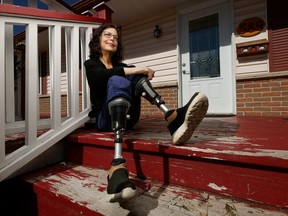 Christine Caron went through rehabilitation to learn to walk and live with prosthetic limbs, but it was another five years before she fully recovered from post-sepsis brain fog and speech problems. Photo by Tony Caldwell /Postmedia

It was a Saturday. She was a single-parent of four children who worked full-time while also looking after four dogs. “I was used to going 100 miles an hour all the time,” she said. “My feet hit the ground in the morning and I just started going.”

Two days after the bite, she noticed she hadn’t gone to the bathroom all day and thought it strange. She would later recognize it as a sign that her kidneys were shutting down.

On Tuesday, during her daily half-hour run, she didn’t make it more than a block. She went to work, but felt so ill that she returned home and slept. Later that evening, she asked a friend to take her to an after-hours clinic in Orléans, but they arrived to find the clinic closed, so Caron decided to go to hospital in the morning.

She spent most of the night in the bathroom with nausea. She thought she had a terrible flu or pneumonia.

“I should have called an ambulance, but my brain wasn’t working properly,” she said.

Caron made it to the Montfort Hospital the next morning and passed out in the waiting room.

She woke from a coma more than one month later only to be told she needed to have three limbs amputated because the blood-clotting associated with sepsis had stemmed the blood flow to her extremities and destroyed much of their tissue.

It was only then, she said, that she learned for the first time about sepsis.

She went through rehabilitation to learn to walk and live with prosthetic limbs, but it was another five years before she fully recovered from post-sepsis brain fog and speech problems.

“That’s one of the other reasons I started these support groups: because you go from having all of this support to being left on your own,” she said. “There’s no support for survivors.”

Caron wants more research into post-sepsis syndrome and more help for those who suffer from it. She also wants more information made available to people so they can recognize when sepsis has taken hold.

“If you recognize those signs and bring them to the attention of a doctor in the emergency room, you can walk out of the ER, rather than be wheeled out,” said Caron, who told her story this past week to mark sepsis awareness month.

One reason sepsis kills so many people — more than 9,000 each year in Canada — is that it’s often hard to recognize as a medical emergency.

Most sepsis cases start at home, and a campaign has been launched by the Sepsis Alliance, a U.S.-based charity, to help people recognize its symptoms. Warning signs include chills or fever, a high heart rate and shortness of breath. People with sepsis can also have extreme pain or discomfort, clammy or sweaty skin and can exhibit signs of confusion or disorientation.

The Sepsis Alliance recommends: “Watch for a combination of these symptoms. If you suspect sepsis, call 911 or go to a hospital with an advocate and ask, ‘Could it be sepsis?’”

Airbnb has a plan to fix cleaning fees

Barbara Kay: As this B.C. teacher found out, even speaking the truth in class is enough to get an educator cancelled

Enebla: Ethiopian cookbook invites everyone to the table

Montreal comes in at No. 8 on list of most child-friendly cities — after Toronto

NP View: It is immoral to pressure Ukraine to negotiate with Vladimir Putin

Fitness: There are ways to keep more teens in the game

Montreal weather: We got rain coming, but it isn't white

Pockets of shelling across Ukraine as wintry warfare looms

Soccer-Ecuador and Senegal to battle for last 16 place

Soccer-Wales heading for exit door, but live in hope against England

A no-fuss royal: Why Princess Anne's profile could be on the rise

Exploring a memory: Designer recreates a dress for Diana

Blues rally from 3-goal deficit to top Panthers in OT

Hurricanes get past Flames 3-2 to end skid

Avalanche get jump on Stars, pull away to win

Suns lean on Deandre Ayton to squeak by Jazz

Blues rally from deficit to top Panthers in overtime

Ukrainian refugees in Okanagan brace for Christmas away from home

No. 6 Gonzaga looks to find rhythm again vs. Xavier

Jets attempt to stick to winning ways vs. Blackhawks