Deadly Neighbours: A Tale of Colonialism, Cattle Feuds, Murder and Vigilantes in the Far West

We tend to think of Canadian history as a tidier version of what happened south of the border. Americans had genocidal “Indian Wars.” Canadians had “peace, order and good government.”

This version is largely rubbish. The Canadian nation state was a disaster for the Indigenous nations that had flourished here for millennia, and the story is laced with blood and colonial dispossession. It runs from the massacres of the Beothuks to the murderous “clearing of the plains” so memorably chronicled in James Daschuk’s 2013 study to unmarked graves outside residential schools to missing and murdered aboriginal women today.

B.C. historian Chad Reimer is doing his best to replace the soothing banalities of earlier colonialist histories of Canada with his deeply researched and eloquently argued studies. His focus is on the areas that flank the U.S./Canada border in western B.C., where Sumas Prairie lies on one side of the line and Washington state’s Nooksack Valley lies to the south.

In his magisterial Before We Lost the Lake, Reimer tells the story of the Sema:th nation, the lake that had been at the centre of their livelihood and culture for millennia and the profound damage done when settlers drained the lake, appropriated the land and displaced the original occupants. Reimer followed up on this study with a blend of documentary research and true crime excitement in his 2020 The Trials of Albert Stroebel.

In Deadly Neighbours, Reimer is back on the beat, telling a complex story of cattle theft, murder and racist violence on the Sumas Prairie. The book opens with Canada’s only known racist lynching. The “deadly neighbours” of the title, a mob of white settlers in the Nooksack Valley, crossed the border on cold a February night in 1884 and seized a Sema:th teenager named Louie Sam. 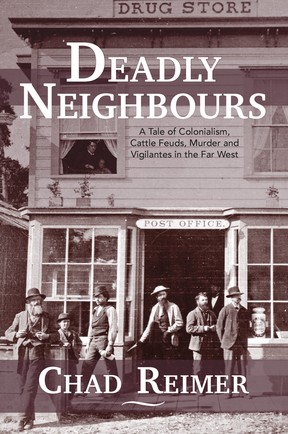 Reimer tells this gruesome tale well, drawing on extensive archival research. He makes a compelling argument that the key crime here is the ongoing horror of Canadian colonialism. Anyone who cares about B.C. history or about the still unfinished work of truth and reconciliation will find this a useful, if heartbreaking, read.

Tom Sandborn lives and writes in Vancouver. He welcomes your feedback and story tips at tos65@telus.net

More news, fewer ads, faster load time: Get unlimited, ad-lite access to the Vancouver Sun, the Province, National Post and 13 other Canadian news sites for just $14/month or $140/year. Subscribe now through the Vancouver Sun or The Province.

COLD CASE: Who were victims Susan Tice and Erin Gilmour?

TRAIKOS: Which NHL teams currently on outside looking in have best chance of making playoffs

Republicans in one Arizona county refuse to certify election results

LILLEY UNLEASHED: Is Justin Trudeau getting ready for a spring election?

White House on Trump dinner with white supremacist: No place for these ‘vile forces’ in U.S.

One on one with Legault: I will protect anglo rights, premier says

Tiger Woods withdraws from his tournament with foot injury

AGAR: Where donation dollars go when you add at the cash register

WORLD CUP: How each team can get through to next round

John Ivison: Canada’s modest Indo-Pacific ‘strategy’ has much to be modest about

No. 3 Virginia prepared for Michigan’s ‘quality’

Panthers forward Tkachuk returns to province where he was loved, and loathed

For many Canadians, Giving Tuesday is the most wonderful day of the holiday season

Man arrested, charged for series of thefts across western Canada

No. 1 Houston puts new top ranking up against Norfolk State

N.B. ‘bird man’ rescues homeless roosters: ‘No sleeping for me’

Hurts looks ‘so good’ in Sunday night win over Packers

Man punched in the face during violent arrest in Abbotsford

WORLD CUP NOTES: Brazil a treat to watch in Qatar

The 20 richest neighbourhoods across Canada