Bulls & Bears: Baseball is on a hot streak going into the playoffs

Bulls of the week

Going into week five of the 17-game NFL regular season campaign, the high-flying Philadelphia Eagles continue to operate in a bull market. They’re the last undefeated team standing at 4-0.

In soccer, the Vancouver Whitecaps appear to have staged a coup in hiring former Canadian women’s national team goaltender Steph Labbe — three-time Olympic medallist and Tokyo 2020 Olympic champion — as general manager of women’s soccer. It’s both a brilliant appointment and a long overdue breath of fresh air for the Whitecaps organization.

In baseball, Aaron Judge has a few days off as his New York Yankees await the winner of the wild card series between the Cleveland Guardians and Tampa Bay Rays. In the meantime, Cory Youmans — the Dallas fan who caught Judge’s record-setting 62nd home run ball — is considering what to do with the hot piece of baseball history. His options include accepting US$2 million or more from a U.S.-based auction house or negotiating a deal with the Yankees. The Judge watch only reinforced how hot sport memorabilia is these days.

Yet there’s nothing hotter this week in the business of sport than baseball’s new wild card format, coming as it does in a year in which MLB-TV clocked more than 11.5 billion minutes watched, a record number. With a series of attractive matchups — including the Toronto Blue Jays hosting the Seattle Mariners, Philadelphia Phillies at the St. Louis Cardinals and the New York Mets home to the San Diego Padres — all that MLB needs now is as many of the four best-of-three series to go the distance and ride on the coattails of the juggernaut NFL audiences on Sunday. 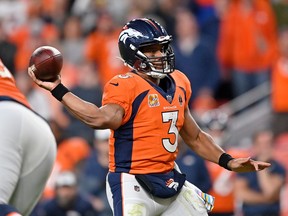 Russell Wilson of the Denver Broncos passes during a game against the Indianapolis Colts at Empower Field At Mile High on Oct. 6, 2022 in Denver, Colorado. Photo by Dustin Bradford /Getty Images

Bears of the week

CBS won the week by drawing an American television audience of 24.6 million viewers in the late afternoon window last week — dominated by Green Bay’s entertaining win over New England — while NBC was solid in the Sunday Night Football prime time slot with 20.9 million tuning into Kansas City’s win over the Tampa Bay Buccaneers. Yet after two big weeks, the NFL served up a dud on Thursday Night Football; a 12-9 snooze fest in which the Indianapolis Colts stunned the Denver Broncos and knocked them down to 2-3.

It wasn’t a night to remember for Amazon Prime, exclusive rights holders in the U.S. Yet it was even worse for Russell Wilson and the Broncos offence. Wilson and a fourth-round Seattle draft pick were traded to Denver in exchange for the Broncos’ first and second round selections in each of the next two drafts, along with a fifth-rounder earlier this year. He will also cost the Broncos US$243 million over five years — or an average of US$49 million per season. This year’s tab will be US$57 million, US$50 million of which is a signing bonus. None of those numbers add up given his performance to date in Broncos orange-and-blue.

Yet no one in sport had a worse week than Hockey Canada, the national governing body that is now officially embarrassing itself with its stance on the sexual assault scandal that has plagued the organization for much of 2022.

The pushback by Hockey Canada’s board of directors in support of CEO Scott Smith has led to unprecedented commentary and potential intervention by Prime Minister Justin Trudeau, sports minister Pascale St-Onge and several provincial hockey associations, not to mention the loss of significant sponsorship dollars this past week alone.

Marketing communications executive and sport business commentator Tom Mayenknecht is a principal in Emblematica Brand Builders and the host of The Sport Market on BNN Bloomberg Radio 1410 and TSN Radio nationally. Follow Mayenknecht at: twitter.com/TheSportMarket

More news, fewer ads, faster load time: Get unlimited, ad-lite access to The Vancouver Sun, the Province, National Post and 13 other Canadian news sites for just $14/month or $140/year. Subscribe now through The Vancouver Sun or The Province.

‘The Phantom of the Opera’ extends its long Broadway goodbye

Timberlake, Bieber among musicians with most fake Instagram followers

Hanes: Montreal's 2023 budget confirms property owners are shouldering too much

Noah and Olivia most popular Canadian baby names in 2022

USMNT fends off Iran 1-0 to advance to knockout stage

Montreal's 2023 budget: Residential property taxes to rise an average of 4.1%

Mexico, US appear headed for dispute over GM corn

As pediatric ERs are overwhelmed, where can Quebec parents turn if their children are sick?

Vatican Swiss Guard slayings back in spotlight with new book

1 man arrested, police looking for 2 others in connection with Kitchener robbery

Mexico open to deal with U.S. on GMO corn as farmers demand clarity over ban

Witnesses failed to save pregnant woman who was beaten to death: Cops

German shepherd badly injured by being dragged behind pickup truck

San Francisco may allow police to deploy robots that kill

Clarence Gilyard, who hacked computers in Die Hard and flew with Maverick in Top Gun, dead at 66

Canadians relied on credit more in Q3 as inflation persisted

Game of the Week: Chase to return against a Chiefs team he burned last season for 266 yards, three TDs

German shepherd badly injured after being dragged behind pickup truck

Mayor says NYC will treat mentally ill, even if they refuse

Mauna Loa volcano is putting on a fiery, striking show

Mother of N.B. man found dead has message for premier: ‘Your province is in crisis’