ALBANY, N.Y. — Construction has begun on an underground electrical transmission line that will export Hydro-Québec electricity to New York City as part of an effort to make the Big Apple less reliant on fossil fuels, state officials announced Wednesday.

Authorities project the line will deliver enough clean energy to power more than one million homes while also cutting carbon emissions by 37 million metric tons, equivalent of taking more than half a million cars off the road annually.

“As construction begins on this project to help deliver clean energy to New York City, our state is setting yet another example of what climate action looks like,” New York Governor Kathy Hochul said Wednesday. She called the transmission line “a monumental step toward protecting our environment and creating family-sustaining, green jobs in both upstate and downstate New York.”

Although New York is no stranger to renewable resources like solar farms and hydro dams, it can be challenging to deliver power south to New York City. The transmission line, which is scheduled to be finished in 2026, would run beneath Lake Champlain and the Hudson River and along existing highways as it makes its way south.

SNC-Lavalin was chosen in April to provide technical supervision and co-ordination for the design of the cables and the converter station in the United States. 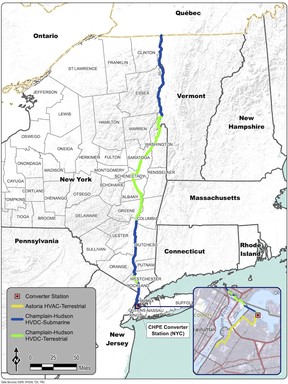 The state has set a goal of having 70 per cent of its electricity powered by renewable resources by 2030. Transmission lines, which move power from where it is generated to where it is consumed, are crucial to that effort, the project’s backers said.

“You look at some of the other resources like offshore wind and solar, those resources are absolutely going to help the state achieve its goal, but a lot of those have to get built,” said Donald Jessome, the chief executive officer of Transmission Developers, which is spearheading the project.

While the state’s move towards accessing more clean energy is one environmental advocates support, they still express concern about potential ramifications to wildlife, since parts of the transmission line will run through rivers.

“We’re very much in support for renewable energy,” said Tracy Brown, the president of environmental group Riverkeeper, “But we remain concerned about the impact on the Hudson. If the cable does go forward, being laid into the Hudson River as planned, we’re calling for the root to be in the center of the river, as far from the margins where there are important habitats for wildlife.”

Brown said it’s important for the construction to minimize harm to the river species in the Hudson, which are already vulnerable.

Transmission Developers, who spent about a decade planning this project, will begin construction near Whitehall, an upstate New York village about 127 kilometres north of Albany.

Suspects demanded woman’s keys and drove her home, then broke in: Toronto police

Donovan Mitchell, Cavs look to get back on track vs. Heat

No. 14 Marquette takes balanced attack into clash with Villanova

Calgary fieldhouse to be a ‘catalyst’ for Foothills Athletic Park redevelopment

Man in critical condition after drug-related fight in Montreal North

Leaf notes: Joseph Woll ready for next round of his NHL career

Letters to the Sun: Mayor Ken Sim's 'swagger address' does not bode well for Vancouver

No. 15 TCU, surging WVU battle for 2nd time in as many weeks

WHO says COVID-19 global emergency isn’t over. What does that mean for you?

U.S. national emergencies for COVID-19 to end in May, Biden administration says

Violence in Colombia falls in first month of ceasefire

IMF upgrades its outlook for the global economy in 2023

Poutine lovers, listen up! The Poutine Week food festival is back

Once again at No. 1, Purdue set to face Penn State

How did Memphis medical workers respond to Tyre Nichols after police beating?

Biden says no F-16s for Ukraine as Russia claims gains

How to stream Super Bowl LVII in Canada

WestJet suspending transatlantic flights between Halifax and Europe this summer

U.S. to end COVID-19 emergency declarations on May 11

No. 22 San Diego State out for more road success at Nevada

LILLEY: Trudeau Liberals more concerned about crime in the U.S. than Canada

Luka the Dog of Regina Police Service dies; handler reflects on his legacy