Homicide detectives in Halton Region are investigating the discovery of a body found in a burned car in Burlington.

Emergency personnel were called Sunday around 3:30 a.m. to a burning car on Dundas St., near Tremaine Rd.

A body was discovered after firefighters doused the blaze. It was taken to Toronto’s Centre of Forensic Sciences to be examined. 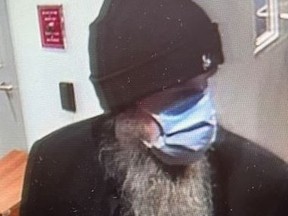 Toronto Police found a man who escaped from a CAMH facility after being found not criminally responsible in the 2010 beheading death of his 78-year-old mother.

Thomas Brailsford, 62, was last seen in the Ossington Ave.-Queen St. area on Saturday at 2:55 p.m. Officers located him around 10 a.m. on Sunday.

Police had cautioned the public to call 911 and to not approach Brailsford if they spotted him. 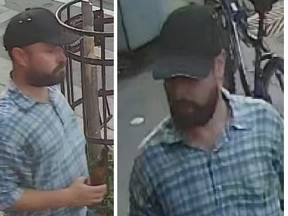 Police are looking for two suspects, including the one pictured above, after a man was hit over the head with a bottle. Photo by Police handout

Toronto Police officers are looking for two suspects after a man was hit over the head with a bottle.

Officers were called to the Dufferin-Bloor Sts. area around 8:30 p.m. on July 9 after the victim complained he was hit over the head with a bottle while talking with two men.

The two men fled after the attack.

Hamilton Police are investigating the sexual assault of a woman on Saturday around 7 p.m. in northeastern Hamilton.

Officers are asking people in the Catharine-Robert Sts. area to review security cameras for any suspicious activity between 6:30 p.m.-7:30 p.m.

The dark-skinned suspect is described as a 6-foot, skinny male with a scar from his mouth to his ear on the right side of his face.

NATO’s Stoltenberg in South Korea to deepen ties in Asia

With tanks on the way, Ukraine's defence minister sets his sights on fighter jets

Like vinyl, but for photos: Why film cameras are back in focus

How supermarket freezers are heating the planet, and how they could change

Azerbaijan to evacuate embassy in Iran on Sunday after fatal shooting

‘We got cheated’: Lakers fume over referee decision in overtime loss to Celtics

Without Luka Doncic, Mavs lose again, this time to Jazz

No. 9 Kansas ends three-game skid by knocking off Kentucky

Call Of The Wilde: Ottawa Senators outgun the Montreal Canadiens

Ukraine’s Zelenskiy decries neutrality in sports at time of war

1 year after disrupting Alberta's border with the U.S., protesters return to Coutts — where wounds remain

‘Blown away’: Hamlin thanks medical team, fans for support

Trump says beating of Nichols ‘never should have happened’

Is tipping getting out of control? Many consumers say yes