It was not the desired result after five weeks of campaigning, he said. But Holness, who founded his political party this year, said he was emboldened by the message he received from several Montrealers.

“People are literally looking me in the eye, shaking my hand, and saying: ‘I love what you’re doing, I love your vision for Montreal, please don’t quit. But I had to vote for the Liberals because François Legault has to go’,” he said.

“It makes me feel inspired. … The people that are checking the box (for us), we can’t let them down. We have no choice but to continue.”

Electors also cast ballots for the Liberals because it’s a familiar brand or out of habit, he added. 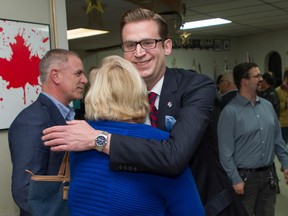 Colin Standish, leader of the Canadian Party of Quebec, embraces a member of his team at the Royal Canadian Legion hall in N.D.G. on Monday, Oct. 3, 2022, on election night. Photo by John Kenney /Montreal Gazette

Colin Standish and his Canadian Party of Quebec (CaPQ), which was also founded this year, were looking for a breakthrough in many of the same ridings on the island, but also in areas like Brossard, the Eastern Townships, Gatineau and Vaudreuil.

Standish, who ran for a seat in the Montreal riding of Westmount—Saint-Louis, said he didn’t have the same reading of voters.

“People are dissatisfied in a profound way with the Liberals,” Standish said.

Holness, who was one of eight candidates for the seat in Notre-Dame-de-Grâce, was in fifth place with 122 out of 159 polls reporting. He had close to seven per cent of the vote. Bloc Montréal ran 13 candidates, most of them on the island, as well as in Laval and Vaudreuil.

The CaPQ, which ran 20 candidates, and Bloc Montréal received little to no coverage in French-language media during the campaign. In fact, the poll-aggregator website QC125.com identified neither party in its polling results, choosing to lump their support together under the heading “other.”

Standish, who was one of eight candidates in Westmount—Saint-Louis, was running fifth or sixth for most of the night with about five per cent of the vote.

With 95 out of 190 polls reporting in D’Arcy-McGee, CaPQ candidate Marc Perez was in fifth place out of nine candidates with about five per cent of the vote.

The CaPQ was launched in June as an offshoot of the Task Force on Linguistic Policy, which Standish co-founded in 2021 to denounce Bill 96, the Legault government’s overhaul of the Charter of the French Language, and the federal Liberal government’s plans to tighten French-speaking requirements for businesses operating under federal jurisdiction in Quebec.

Bill 96 curtails access to government services in English and requires private businesses and municipalities to serve clients in French under threat of financial penalty.

The CaPQ also opposes Bill 21, the CAQ’s secularism law that bans certain public-sector employees, including teachers and police officers, from wearing religious symbols, and Bill 40, which replaces elected school boards with service centres. Opponents of Bill 40 argue it infringes on the constitutional rights of the English-speaking community to control its school system.

Standish, a lawyer who hails from the Eastern Townships, said at the start of the campaign his party didn’t see itself as “Equality Party 2.0,” a reference to the anglophone rights party that won four seats as a new party in the 1989 Quebec election.

The CaPQ’s founding principles call for respect of human rights and minority rights and support bilingualism and reconciliation between Indigenous peoples in Quebec and non-Indigenous Quebecers. Every Quebec resident, it said, regardless of mother tongue and country or province of origin, should have the right to send their children to the school of their choosing.

Holness, a former Alouettes football player who ran for mayor of Montreal in the 2021 municipal election, said he founded Bloc Montréal this year because no one has been defending the interests of the metropolis in the National Assembly. Montreal, he maintained, was “disproportionately and negatively” affected by the policies of François Legault’s Coalition Avenir Quebec government, to the benefit of the regions of Quebec. Bloc Montréal also argued legislation passed by the Legault government, notably Bill 96 and Bill 21, curtailed minority rights that disproportionately affected Montreal.

The Bloc Montréal platform called for Montreal to have greater fiscal and political autonomy within Quebec, with the party arguing Quebec is similarly demanding more autonomy from the federal government.

Bloc Montréal also called for Quebec to give Montreal 20 per cent of the revenue of the Quebec Sales Tax (QST) that’s generated on the sale of goods and services in the city. It also called for a $5 congestion fee to be levied on non-resident vehicles entering the island of Montreal. The latter would finance free public transit service during morning and afternoon rush hour, the platform said. The party also called for achieving carbon neutrality by 2040.

The Bloc Montréal platform also pledged to lobby for electoral reform by adding an element of proportional representation, which the Coalition Avenir Québec had promised in the 2018 election, but abandoned after it was elected.

Holness garnered 7.2 per cent of the popular vote in the mayoral race, finishing third behind incumbent Valérie Plante and former mayor Denis Coderre. He notably called for Montreal to become a bilingual city-state. The municipal party he founded, Movement Montreal, won no council seats.

Holness has said Movement Montreal and Bloc Montréal “will survive my political career.”

Before running for mayor, Holness created a non-profit organization, Montreal in Action, which collected 22,000 signatures on a petition that in 2019 forced the city of Montreal to hold public hearings on systemic racism and discrimination within the police force and municipal departments. The hearings drew 7,000 participants and led to a damning report that recommended sweeping changes and compelled the city to recognize the existence of systemic racism.

3 held in Kirkland, Laval cocaine busts to return to court next week

Driver passed out behind wheel in middle of Brampton road taken into custody for impaired: police

Home explosion in Regina on Nov. 13 was accidental result of criminal activity: police

US military halts patrols against Islamic State in Syria

Soccer-Ronaldo denies he swore at Portugal coach over substitution

Man injured, hypothermic after being trapped in garbage truck in B.C.'s Okanagan

3 men convicted in rape, death of 13-year-old girl in Austria

Notre Dame looks to get it in gear vs. slumping Syracuse

Pele to remain hospitalized due to respiratory infection

Drop in COVID alertness could create deadly new variant: WHO

Arctic chill over much of B.C., snowy wallop for Vancouver Island: Environment Canada

Soccer-South Korea leave it late, then wait, before reaching last 16

Ottawa is failing in protection of Indigenous women and girls: federal minister

The Chase Is On: Cowboys, Giants, Bills and Bucs are favourites to land free agent receiver Odell Beckham Jr.

Atiba Hutchinson may have kicked last ball for Canada

Seaborne Russian oil will be price capped at US$60 a barrel, EU nations say

Bank of Canada expected to deliver interest rate hike next week. How high will it go?

Robert Libman: It's time to concentrate on the real problems

Man charged with uttering threats must stay away from Jewish community

New COVID variant could emerge amid drop in surveillance, vaccination, WHO warns

Body found after blaze in small building in Kitchener: police

West Kelowna man injured after being scooped up by garbage truck

Canada needs to act on its existing defence policy, not review it repeatedly

Snubbed by Canada, Germany goes all-in with autocratic Qatar for its gas

This Week in History, 1897: The Province maps out the Klondyke Gold Rush