Were there claws in his contract that no one knew about? After famously retiring the character of Wolverine after 2017’s Logan, actor Hugh Jackman has announced – in the most casual way possible – that he’ll be strapping on the sideburns and adamantium claws to play the superhero one more time, in Deadpool 3.

The announcement came this week via the Twitter feed of Ryan Reynolds, a.k.a. Deadpool. Addressing fans from what appears to be his living room couch, Reynolds admits that he’s come up a little short on ways to make the third Deadpool movie special.

“But we did have one idea,” he concludes, as Jackman suddenly wanders by in the background. “Hey, Hugh, you wanna play Wolverine one more time?” Jackman, not even breaking stride, mutters: “Yeah, sure Ryan.”

It’s a far more satisfying answer than the one he gave in 2011’s X-Men: First Class, when a cameo shows Wolverine having a cigar in a bar when he is approached by a young Charles Xavier and Erik Lehnsherr. They barely have time to introduce themselves before Wolverine tells them: “Go f— yourself.”

Including that 24-second scene, Jackman has played the character in nine films, beginning with 2000’s X-Men and including X-Men Origins: Wolverine (2009) and The Wolverine (2013). Logan, set in the near future, features the death of the character, who was pushing 200, having been born in 1832 in what is now Canada.

Rumours of Jackman’s un-retirement have swirled for some time, fuelled in part by an image he tweeted in July of 2021 titled “Wolverine and Kevin Feige,” and showing a bearded Jackman posing next to the Marvel Studios president.

And as far back as the release of Logan in 2017, Jackman intimated that he might have kept the character going if he could have joined the Marvel Cinematic Universe. That became a possibility in 2019 with the purchase of Fox studios (which held the film rights to the X-Men) by Disney, parent company of the MCU.

Fans will have to wait a while to see what Jackman and Reynolds get up to in Deadpool 3. The film is set for release sometime in 2024. And yes, the two did release a followup video purporting to answer questions about timeline and canon, but the audio has inexplicably been overdubbed with the strains of Wake Me Up Before You Go-Go by Wham! Which, again, is a whole lot better than: “Go f— yourself.” 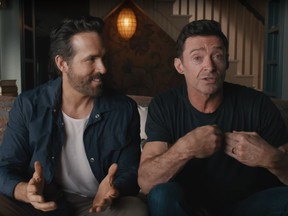 Reynolds and Jackman discuss their plans for Deadpool 3. Make sure to turn up the volume.

Get the latest from Chris Knight straight to your inbox

Bank of Canada ‘still prepared to be forceful’ on interest rates if needed: official

For India’s ‘third sex’, acceptance mired in colonial past

‘PROVE IT’: Olive Garden manager fired for telling workers to bring dead dog in if time off requested

Man charged in connection with carjacking in Toronto: police

Cheers, but hold the booze: Why interest in sobriety is rising this holiday season

WNBA star Brittney Griner a generational talent on the court

‘Gossip behind the scenes’: Reaction to Harry and Meghan’s Netflix documentary

Six children in B.C. have died this season from flu-related illness: B.C. CDC

UNSOLVED: Daughter of Honey and Barry Sherman issues plea for info on 5th anniversary of murders

Porter Airlines to fly out of Pearson to Vancouver, plus Ottawa and Montreal

US woman who killed UK teen in crash gets suspended sentence

Rubin: A community action plan for the next convoy that rumbles into Ottawa

Ontario to allow pharmacists to prescribe antiviral Paxlovid for COVID-19

Suspect was on foot, bike in area hours before woman killed at Mississauga gas station: police

Céline Dion has Stiff person syndrome. What is it?

As COVID-19 becomes routine, Africa readies for next crisis

Kremlin appears to have scaled back its war ambitions in Ukraine