Condolences are coming from all corners of the academic world following the death of Caroline Andrew, a distinguished University of Ottawa professor emeritus, leading researcher on women and politics and a notable advocate for the Franco-Ontarian community.

“We regret her passing and we offer our condolences to her family friends colleagues,” the Canadian Political Science Association wrote in a notice posted Friday.

Andrew was the first woman to serve as chair of the CPSA and, during a lengthy career at the University of Ottawa, served as dean of the university’s Faculty of Social Sciences and worked as a full professor in the School of Political Studies and as director of the Centre on Governance.

The university described Andrew as “a nationally recognized authority on urban and feminist studies, as well as on cultural diversity.”

“We regret the passing of our Professor Emeritus Caroline Andrew,” the University of Ottawa’s School of Political Studies wrote in a statement. “She had been deeply involved at the University for more than 30 years. Her work in urban and feminist studies has shaped her national reputation. We offer our full condolences.” 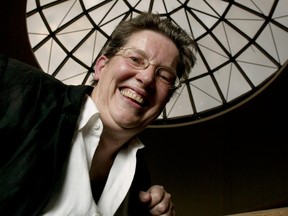 During a lengthy career at the University of Ottawa, Caroline Andrew served as dean of the Faculty of Social Sciences and worked as a full professor in the School of Political Studies and as director of the Centre on Governance. Photo by Patrick Doyle /Postmedia files

Andrew was invested as a Member of the Order of Canada in 2015 for her academic research on cultural diversity, on urban and feminist studies and for her civic involvement with non-profit and community-based organizations.

“Caroline Andrew is a leading voice in academia and social activism in Ottawa,” her Order of Canada biography reads. “A former dean of social sciences at the University of Ottawa, she co-founded its women’s studies program and is noted for her research on urban and feminist studies. At the grassroots level, she has volunteered with such organizations as the Ottawa Local Immigration Partnership and the Lowertown Community Resource Centre to advocate on behalf of newcomers, women and residents of inner-city neighbourhoods. She has also championed civic initiatives that support better immigrant integration, crime reduction and the language rights of Franco-Ontarians.”

Indiana officer fatally shoots man who had pulled a handgun

Celtics in search of more energy in visit to Pistons

BRAUN: Don’t forget about Vitamin D as winter drags on

Dodgers to retire Fernando Valenzuela’s No. 34

LILLEY: United front key for premiers as they bargain health deal with Trudeau

Working in the Metaverse? Some Canadian firms are setting up shop in the virtual world

Duke and No. 23 Miami jockey for ACC position

Minnie Driver: I faked an orgasm to get a job

Partner arrested for attempted murder after woman falls from balcony

3 in hospital after crash sends vehicle into ditch in Mississauga, Ont.

Republicans criticize Biden for waiting to shoot down Chinese balloon

At least 24 dead in Chile as wildfires expand; foreign help on the way

PAGET: Brace yourself – Valentine’s Day is coming for you

‘Knock at the Cabin’ knocks off ‘Avatar’ at box office

‘Knock at the Cabin’ knocks off ‘Avatar’ at the box office

Pope hits back at critics who used Pope Benedict XVI

Super Bowl a showcase for next generation of quarterback talent

Vancouver weather: Showers in the morning, then rain overnight

Cubans respond with zeal to new US migration policy

Liberals ‘didn’t quite get it right’ on C-21 firearms amendment: minister

‘Not the first time’ a Chinese surveillance balloon passed over U.S.: ambassador

As many as 80K Marylanders could lose Medicaid eligibility