Controversial congresswoman and conspiracy queen Rep. Marjorie Taylor Greene has been hit with divorce papers because of a propensity for cheating with a tantric sex guru, according to published reports.

The conservative gadfly confirmed the split to the New York Post — but she didn’t state the reasons.

“Marriage is a wonderful thing and I’m a firm believer in it,” Greene told the newspaper in a statement.

“Our society is formed by a husband and wife creating a family to nurture and protect. Together, Perry and I formed our family and raised three great kids. He gave me the best job title you can ever earn: Mom.” 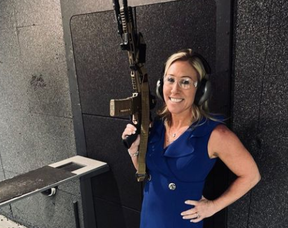 Her husband, Perry Greene, pulled the plug Tuesday after 27 years of marriage. They have three grown children.

According to TMZ, the couple had separated in the past. He said she was his “best friend” and an “amazing mom.”

But the Daily Mail reports that a sexual affair with the polyamorous tantric sex guru effectively torpedoed the marriage before she allegedly moved on to a personal trainer. Neither denied the affairs, the Mail added.

Personal trainer Justin Tway said: “I have no interest in talking about anything to do with that woman. Everything with her comes to no good.”

Sources told the newspaper that the Georgia Republican didn’t hide her carnal capers, which stretch back at least a decade.

“It wasn’t a secret. Everyone who moved in her circles knew about both the affairs,” one man who worked with Taylor Greene told the tabloid.

Jim Chambers, the grandson of her billionaire former boss, added: “She socialized a lot with us. I remember one particular pool party where she was lying draped over Craig’s (Ivey, the tantric sex guru) lap drinking a beer. She was quite open about it. We all thought her marriage was falling apart.

“But then I took my son to her son’s birthday party and things seemed totally normal between her and her husband — even if they were a little lukewarm.”

Taylor Greene responded to the report in kind, calling it “ridiculous tabloid garbage spread by an avowed Communist” and “another attempt to smear my name because I’m the biggest threat to the Democrats’ Socialist agenda.”

The 46-year-old firebrand labels herself “a strong conservative Christian.” But she has also raised eyebrows even among traditional Republicans for her enthusiasm for conspiracy theories spewed by QAnon.

Preeminent among them is the belief that former U.S. President Donald Trump was sent by God to defeat the Democrats. The reason? Democrats are at the centre of a national ring that eats, abuses and traffics children.

Taylor Green has also described the Parkland and Sandy Hook school massacres as “false flag” events that target gun owners. She has also wondered aloud whether the horrific terror attacks on 9/11 that killed 3,000 Americans were real.

After she captured the primary last summer, Jim Chambers tweeted: “@mtgreenee so when you worked for me at CrossFit Alpharetta in 2012, the extramarital affairs you had with Justin and Craig, those were Jesus-approved, right?”

Chambers added: “I would never choose to doc someone’s infidelities … unless they’re this person.”

“Guys talk and I know there was definitely sex involved. People don’t make up stuff like that,” a source told the Daily Mail. “They were spending a lot of time together, turning up at the gym in the same car.

“When I would suggest going out, Craig would say he had things to do with Marjorie.”

Still, another insider added Taylor Greene was a different person in those days.

“What I do know is that she was a lot different then to what she is now,” the source said. “I worked out with her a lot and she certainly wasn’t saying the insane things she is now. If she had been, I would have had nothing to do with her.”

Montreal's 2023 budget: Residential property taxes to rise an average of 4.1%

Mexico, US appear headed for dispute over GM corn

As pediatric ERs are overwhelmed, where can Quebec parents turn if their children are sick?

Vatican Swiss Guard slayings back in spotlight with new book

1 man arrested, police looking for 2 others in connection with Kitchener robbery

Mexico open to deal with U.S. on GMO corn as farmers demand clarity over ban

Witnesses failed to save pregnant woman who was beaten to death: Cops

German shepherd badly injured by being dragged behind pickup truck

San Francisco may allow police to deploy robots that kill

Clarence Gilyard, who hacked computers in Die Hard and flew with Maverick in Top Gun, dead at 66

Canadians relied on credit more in Q3 as inflation persisted

Game of the Week: Chase to return against a Chiefs team he burned last season for 266 yards, three TDs

German shepherd badly injured after being dragged behind pickup truck

Mayor says NYC will treat mentally ill, even if they refuse

Mauna Loa volcano is putting on a fiery, striking show

Mother of N.B. man found dead has message for premier: ‘Your province is in crisis’

She was kidnapped as a baby in 1971. Her family just found her alive.

Have you seen The Grinch? He's missing after Christmas display trampled at tourist park, OPP says

FIFA World Cup: Canada looks to get result against Morocco before leaving Qatar

Soccer-Tears, no fears for Senegal after advancing into knockout phase